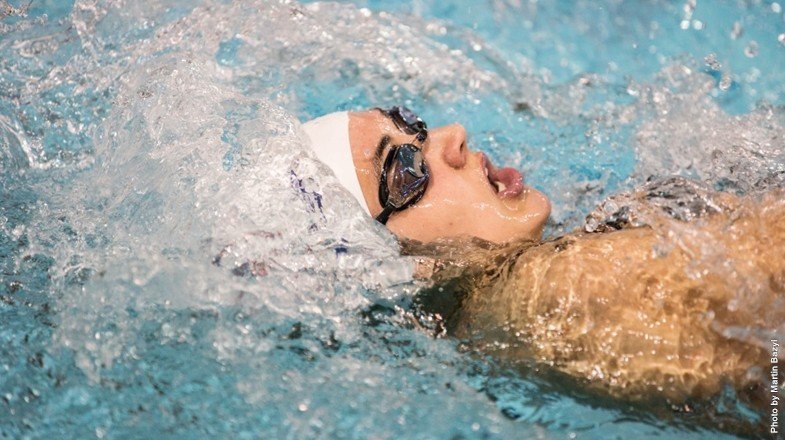 Kylie Masse is the clear favourite in the 50m backstroke after her performance this morning. Masse was just seven one-hundredths off her Canadian record of 26.65, going a 26.72 to take the top seed by over a second.

In the first individual event of the championships, UBC Thunderbird Erika Seltenreich-Hodgson took the top seed heading into finals with a swift 1:58.25. In the past, Seltenreich-Hodgson has been primarily an IM swimmer, but with her experience she will be a big threat in finals.

Roxane Lemieux qualified just behind her in 1:58.82 ahead of two University of Toronto swimmers. Both Paige Schultz and Victoria Radounski touched in at under two minutes with times of 1:59.24 and 1:59.78 to grab the third and fourth seeds respectively.

Maia Brundage of UBC took the fifth seed overall and was the only other swimmer under the two-minute mark with a 1:59.78.

The men’s 200m freestyle looks to be one of the fastest finals of the night with five swimmers hitting a 1:47-mark. The top five are separated by less than four-tenths of a second with no direct leader emerging after the heats this morning.

Freshman Carson Olafson of UBC took the top seed overall with a time of 1:47.18. Right on his tail was UofT swimmer Oliver Straszynski who has demonstrated plenty of speed throughout his career. Marshal Parker, Keegan Zanatta, and Evan Van Moerkerke make up the remainder of the top five.

Zanatta, more known for his distance races, could be a big threat considering his experience as could Van Moerkerke. Competing with Guelph, Van Moerkerke has international experience under his belt.

Kylie Masse is the clear favourite in the 50m backstroke after her performance this morning. Masse was just seven one-hundredths off her Canadian record of 26.65, going a 26.72 to take the top seed by over a second.

Marie-Pier Couillard of Laval was second behind her in 27.64 with Pheobe Lenderyou of Dalhousie taking the third seed overall in 27.90. All remaining swimmers were over 28-seconds in the race and well behind Masse.

Masse is right on target to better her Canadian record tonight in finals.

Calgary’s Chris Courtis and Josh Dow will have to battle it out tonight int he men’s 50m backstroke after touching just one one-hundredth apart in prelims.

Adding even more speed to the final was Calgary’s Bradley Crocker who could be the man to give the Dinos a 1-2-3 podium sweep if he’s able to get past Cantin and the the two leaders can retain their placing. Crocker was a 24.93 this morning for fourth overall.

Kyle Haas and Daniel Kuiack from Toronto were fifth and sixth in 25.14 and 25.24. Add in Noah Choboter of Regina and Joe Byram from Alberta, and tonight’s final is set up to be a dog fight.

UBC Thunderbird and 2012 Olympian Tera Van Beilen dominated the women’s 100m breaststroke this morning, taking the top seed by over a full second with a 1:07.00.

The women’s breaststroke in the CIS has plenty of depth including UBC’s Erin Stamp and Calgary’s Tianna Rissling who touched in second and third behind Van Beilen. Stamp clocked in a 1:08.01 to better Rissling’s 1:08.15.

The two look to be Van Beilen’s closest competitors. Both Alexandra Naisby of Sherbrooke and Rebecca Terejko from UBC are in the medal hunt as well after posting sub 1:09 times this morning.

Toronto standout Eli Wall almost dipped under the one-minute mark this morning en route to taking the top seed heading into tonight’s final. Wall was a 1:00.02 to touch ahead of Manitoba’s Dillon Perron.

Perron was a 1:00.24 this morning. Jonathan Naisby of Sherbrooke also dipped under 1:01, posting a 1:00.82 to take the third seed behind both Wall and Perron.

Stephen Giovanetto and Antoine Bujold were close to Naisby with times of 1:01.22 and 1:01.32 respectively.

Jacomie Strydom, Sophia Marois, Paulina Bond, and Sherry Patel will have the chance to battle it out in the 100m butterfly tonight after posting very similar times this morning.

Although the four of them are in the lead, Phoebe Lenderyou, Marie-Pier Couillard, Eva Madar, and Marie-Lou Lapointe are all close enough to be in the medal hunt for tonight.

The entire top eight was separated by just nine-tenths of a second this morning, and looks to be extremely competitive.

Western’s Gamal Assaad showed his speed this morning with a swift 53.10 in the men’s 100m butterfly. Just like in the women’s event, the final is projected to be extremely close.

Behind Assaad this morning was Edward Liu and Matthew Dans. The two Toronto swimmers put up times of 53.16 and 53.35.

With plenty of swimmers behind them who could disrupt this morning’s order, the men’s 100m butterfly should come down to the touch.

Erika Seltenreich-Hodgson demonstrated a tough double this morning, taking the top seed in both the 200m freestyle and 400m IM. With a 4:42.26 this morning, the UBC standout proves to be the one to beat heading into finals.

Bundled up with times similar to Cantin and Strydom’s, Dal’s Rachel Shin and Tianna Rissling of Calgary are right in the mix for a medal.

UBC, UBC, UBC. Colin Eriks, Jonathan Brown, and Hau-Li Fan are currently in a position to take home a 1-2-3 podium sweep tonight for the Thunderbirds if they’re able to retain their positions from the heats.

Osvald Nitski of Toronto might have something to say about that however, as he touched in just 0.11 seconds behind Fan and is right in contention for a medal.

With a few others in a similar time range as Nitski, tonight’s final looks to be a very close one.