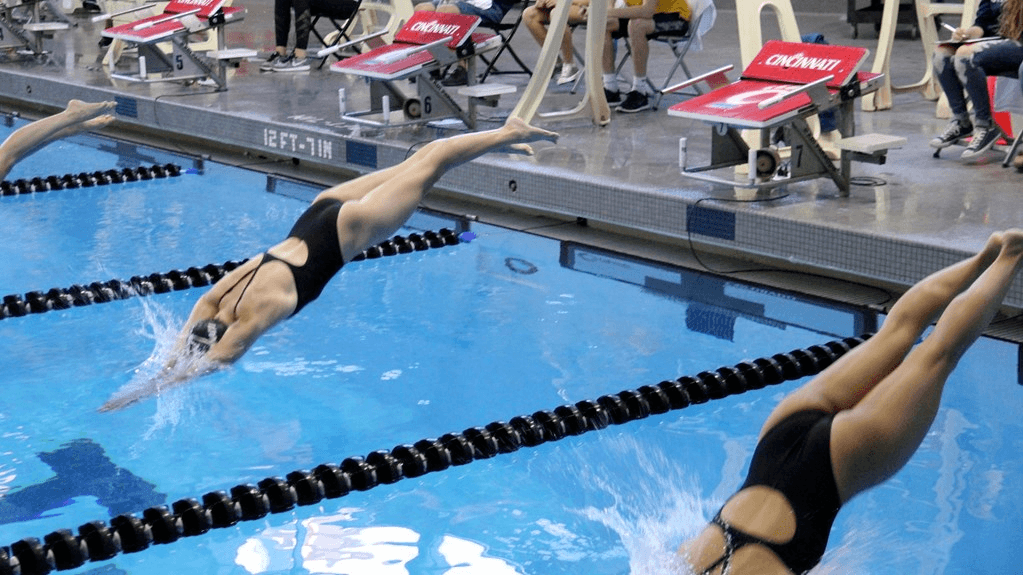 INDIANAPOLIS, Ind. – University of Cincinnati swimming and diving captured both the men’s and women’s titles at the House of Champions invitational hosted by IUPUI this weekend after a successful final day on Sunday.

TOP TEN TIMES
• For the third-straight day, numerous Bearcats posted top ten times as the UC record books will have to be rewritten
• Sydney St. Rose-Finear now sits sixth all time in the 1650 free while Tyler Jones also posted the sixth fastest time in the event
• Both Joey Puglessi and Connor Blatt swam the 200 back in the third-fastest time ever at UC
• Schmelzer’s win in the 100 free ranks fourth while Kutsko now ranks eighth
• Dalton Lillibridge broke into the top ten at tenth in the 200 breast while Polling now ranks second all-time
• Ryan’s 200 fly swim is the fourth-fastest
• Saladin’s 200 fly time ranks third
• The women’s 400 free relay time is fifth while the men’s is fourth in UC history

DIVING RESULTS
• Claire Schuermann scored a 299.35 on 3-meter for a second-place finish
• Tai Sims placed seventh in 1-meter for the men

OTHER TOP FIVE FINISHES
• St. Rose-Finear was third in the 1650 free
• Tyler Jones finished second, Din Selmanovic third and Toby Van Dyke fifth in the 1650 free
• Natalie Obando won the 200 back
• Blake Hanna came in second in the 200 back with Puglessi finishing third
• Schmelzer and Kutsko were one-two in the 100 free with Exton coming in third
• Fortman was fourth in the 100 free and Garcia was fifth
• Dee Sopapong won the 200 breast. Victoria Hunt came in third
• Polling was first to the wall in the men’s 200 breast
• Palomo finished second behind Ryan in the 200 fly with Camryn Streid taking fourth place
• George Epsly was third in the 200 fly with Saladin winning the event

UP NEXT
• The team will split for competition November 28 through December 1
• US Winter Nationals will take place at Greensboro, N.C.
• The rest of the Bearcats will travel to the Miami University Invite in Oxford

INDIANAPOLIS – The UConn swim and dive team placed second with 1416.5 points at the 10-team House of Champions event in Indianapolis this weekend.

Will Kearsey (100 Back), David May (400 IM) and Monica Marcello (1M Dive)  highlighted day two of the House of Champions by securing first place finishes for the Huskies.

Freshman Katelyn Walsh reached the podium with a third place finish in the 100 Breast. The LaGrangeville, N.Y. native swam the race in 1:03.23, a personal best.

Katie Breault had a solid night for UConn with a fourth place finish in the 100 Fly and landed in sixth in 400 IM behind teammate Holly Parker (4th).

UConn secured podium finishes in the relays with the men’s team of  Kearsey, Mark Hunter, May and Kyle Dunlap taking second in the 200 Medley. The women’s relay team of Ryan Dulaney, Maddy Blair, Jackie Van Lew and Megan Wenman grabbed a third place finish in the 800 Free

On Friday, junior Will Kearsey set a school and meet record in the 50 Free with a time of 19.82 to win the event and capture 32 points for the team. The time also was an NCAA “B” standard time for Kearsey.

Our program had a really good day today. Our athletes are gaining confidence with every swim. It was fun to be a part of today, said head coach Chris Maiello. “To be doing these times in November says a lot about the work we put in to this point. We have a long way to go and we will keep working, but it’s fun to see our athletes performing this way.

In the relays, the combination of Brazil Rule, Maddy Blair, Linnea Anderson and Jackie Van Lew pushed UConn to the top of the podium with a time of 1:32.63 in the 200 Free Relay, the time marked a meet record.

The men earned a first place finish in the 400 Medley Relay with Kearsey, Mark Hunter, David May and Kyle Dunlap setting a meet record time of 3:13.66.

Torrington Wagner secured a runner-up finish in the platform event with a score 245.45.

INDIANAPOLIS – As the last three days go by, the Greyhounds concluded their House of Champions Invitational. As the only Division II institution at the invite, the Greyhounds competed exceptionally against their foes. Overall, the women placed fifth with 1035 points total. The men competed incredibly well, as they totaled 1417.5 points for second place.

Laura Boardman kicked off the final session with almost a record-setting performance of her own. Boardman swam the women’s 1650 free on a 16:54.31 time, well-under her B-cut goal. The young sophomore was also less than a half-second off the UIndy school record, something she’ll look for in March. Melanie Arnold also gained her B-cut in the event, touching the wall at a time of 17:10.99.
Sophomore Adam Rosipal recorded the second A-cut of the weekend in the men’s mile, slamming home a 15:13.73 time for another UIndy school record. This swim also lowered his own record by almost three seconds. Cody Liske brought home a B-cut of his own in the event, as he came to the wall at a 15:48.06.

The women’s 200 back proved to be nothing less than thrilling, as both Danielle Wood and Edda Skoric were under UIndy’s school record. Skoric will have her name on the board with her second place, 1:58.16 swim, as Wood’s 2:01.35 time placed her fourth overall.

Junior TJ Leseure made his mark in the men’s 200 breast, as he came down the lane this morning to touch the wall as UIndy’s new school record holder. His time of 1:58.25 gave him a B-cut in the event. Darian Murray held on in the women’s 200 fly, as her B-cut swim finished fifth overall on a 2:03.52 time.

The Greyhound’s final events of the weekend worked well for the squads, as the women brought home second overall in the 400 free relay. Izzi Clark, Votava, Sizemore, and Caylor finished on a 3:25.81 time, under the national cut. The men also came down to a second place, national cut time in the men’s 400 free relay. The crew of Victor Antonon, Kael Yorke, Ante Lucev, and Zavaneli combined to finish at a time of 2:59.3.

SATURDAY
The swimming teams at UIndy continued to shine in the annual House of Champions Invitational, as they broke an additional two records after Saturday’s day two session. The men’s 200 medley relay kicked things off with a national qualifying time, as Codo Berti, Jan Zuchowicz, Antonio Milin, and Victor Antonon finished with a 1:28.94 time.

The men’s 100 breaststroke was the Greyhounds’ best event of the weekend, as they came out with three B-cuts and two men under the school record. Zuchowicz pulled a victory on his :53.51, Leseure snagged second on his :53.91 swim, and Antonio Milin slammed home in third on his :54.95 time.

The women’s 100 back also brought a new school record, as Izzi Clark claimed her top spot in the event. Her B-cut swim of :55.58 will remain the top UIndy swim ever. Edda Skoric placed fourth overall on a :56.06, taking a B-cut of her own as she placed fourth. Codo Berti continued his dominance, as he finished second overall with his :48.04 B-cut swim in the men’s 100 back.

The Greyhounds finished day two with a second place finish in the men’s 800 free relay. Their 6:35.81 time gave them their final national cut of the night. Adam Rosipal, Vitor Botana, Victor Antonon, and Guilherme Zavaneli was the squad who competed in the event.

FRIDAY
The Greyhounds started day one of House of Champions with five school records broken, one meet record, sixteen B-cuts, three relay cuts, and one A-cut. Stefanie Haholiades, Izzi Clark, Sloan Sizemore, and Kirsten Votava broke the 200 free relay record at UIndy on a time of 1:33.14. Victor Antonon, Jan Zuchowicz, Ante Lucev, and Guilherme Zavaneli obtained a victory in the men’s 200 free relay at a 1:21.89 finish.

As the 500 free swims came next, Laura Boardman, Danielle Wood, Katie Thomas, and Melanie Arnold all received B-cuts for the women. Cody Liske snagged his own B-cut in the men’s event, as Adam Rosipal secured his ticket to the NCAA Championships on an A-cut, school record, meet record, 4:21.38 swim. Krystal Caylor continued the record-breaking train by taking the women’s 200 IM with a 2:02.32 swim. She obtained a B-cut as well as Rodrigo Codo Berti (1:47.66) and Antonio Milin (1:48.53) for the men’s 200 IM.

Freshman Kirsten Votava placed her name in the UIndy record-books in the women’s 50 free, setting a B-cut swim of :23.36. Stefanie Haholiades, Izzi Clark, Johanna Buys, and Sloan Sizemore also obtained cuts in the event. For the men, Victor Antonon, Jan Zuchowicz, and Ante Lucev slapped the wall with B-cut standards in the men’s 50 free as well.

The women kicked off the final relays of the day on a national cut in the 400 medley relay, as Clark, Alaina Joyce, Darian Murray, and Caylor hit the wall at a 3:49.32 time. The men answered with a national cut of their own in the event, as Codo Berti, Zuchowicz, Brady Stabler, and Zavaneli came into the finish at a time of 3:16.06 to finish.

After an exceptional weekend, the Greyhounds will continue to look forward to more great training over the holidays. They’ll see competition next on December 14th after final exams, as the women take on Indiana Wesleyan, and the men face off for another Intrasquad. The meet commences at 5:00 PM EST at the Ruth Lilly Fitness Center in Indianapolis.

INDIANAPOLIS – One school record fell while another was matched on the last day of the 2018 House of Champions. Freshman Nick Hanas crushed the school record in the men’s 200 backstroke and the IUPUI women’s 400 freestyle relay tied the school mark.

Hanas finished with the top individual finish in the pool for IUPUI, taking fourth in the men’s 200 backstroke in a time of 1:47.30, more than two seconds better than the school record set in 2014. It was the longest-standing men’s school record.
To close out the night, the team of Andrea Hanas, Meagan Ronci, Tori Kroon and Mallory Buha took third in the women’s 400 freestyle relay, clocking a time of 3:25.83. This mark tied the record set in last year’s Horizon League Championships set by the same four swimmers.

Jackson Sandala had the best showing in the 100 freestyle with a sixth place finish (45.36). The men’s 400 freestyle relay featuring Sandala as well as Josh Barajas, Jung and Anderson, finished seventh with a time of 3:03.14.