Chalmers Drops 200 Fr Due To Illness, Efimova Looks For 2nd Win At NSW 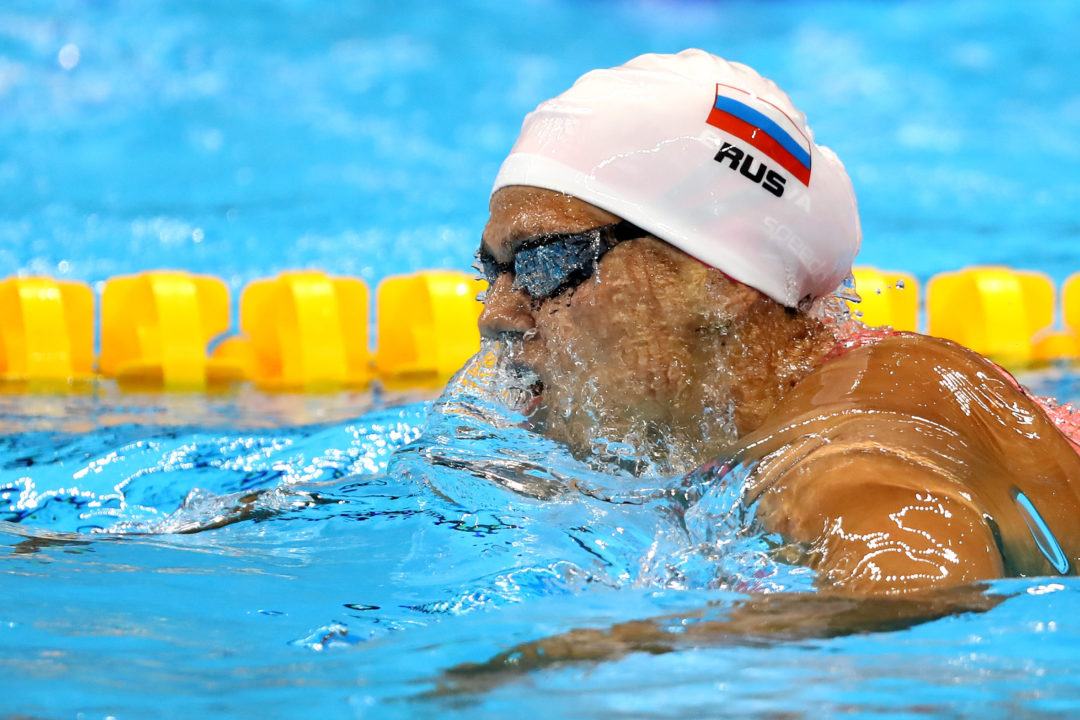 Russia's Yulia Efimova already snagged the 100m breaststroke gold in Sydney and has set herself up for a run at the 200m. Archive photo via Simone Castrovillari

The 2nd prelims session of the 2017 NSW State Open Championships saw fewer fireworks than the first day’s, but there were still some notable swims that may ignite a big final tonight. 18-year-old Matthew Wilson cranked out a swift 100m breaststroke morning swim of 1:00.81 to sit over a second ahead of the pack. Wilson’s personal best is the 1:00.54 he notched at Australia’s Olympic Trials last year and this morning’s outing ranks as the next quickest of his career. Tonight may possibly be the night the SOPAC Swim Club athlete breaks the minute barrier.

Three women touched in times under the 2:30 threshold this morning in the 200m breaststroke, led by 2016 Olympic finalist Taylor McKeown‘s mark of 2:26.89. McKeown already owns two individual medals from these championships, having claimed bronze in the 100m breaststroke and gold in the 400 IM yesterday. The woman who took the gold in the former event, Russia’s Yulia Efimova, is positioned as the 2nd seed headed into the 200m breast finals, having secured a morning time of 2:28.80. St. Peters Western’s Georgia Bohl is right behind in 2:29.53 to set up a potential 3-way battle this evening.

As was probable due to his respiratory illness that came on while traveling to Sydney, 18-year-old Olympic champion Kyle Chalmers wound up not swimming the men’s 200m freestyle In his stead, the top 4 swimmers were a combination of 2 Bond swimmers and 2 St. Peters Western athletes, all earning morning times within .7 of a second of one another. The boys from Bond included Alexander Graham and Cameron McEvoy who touched in times of 1:48.93 and 1:49.47 for the 1st and 3rd seeds, respectively. St. Peters Western squadmates Clyde Lewis and Daniel Smith comprise the remaining pair, earning respective times of 1:49.29 and 1:49.56. We’ll see tonight who will set himself apart to take the NSW State title.

Following up on her 100m freestyle victory from last night, back-in-training Cate Campbell notched the 2nd fastest 50m free time of the morning in 25.31, to be bested only by younger sister Bronte Campbell‘s 25.04.