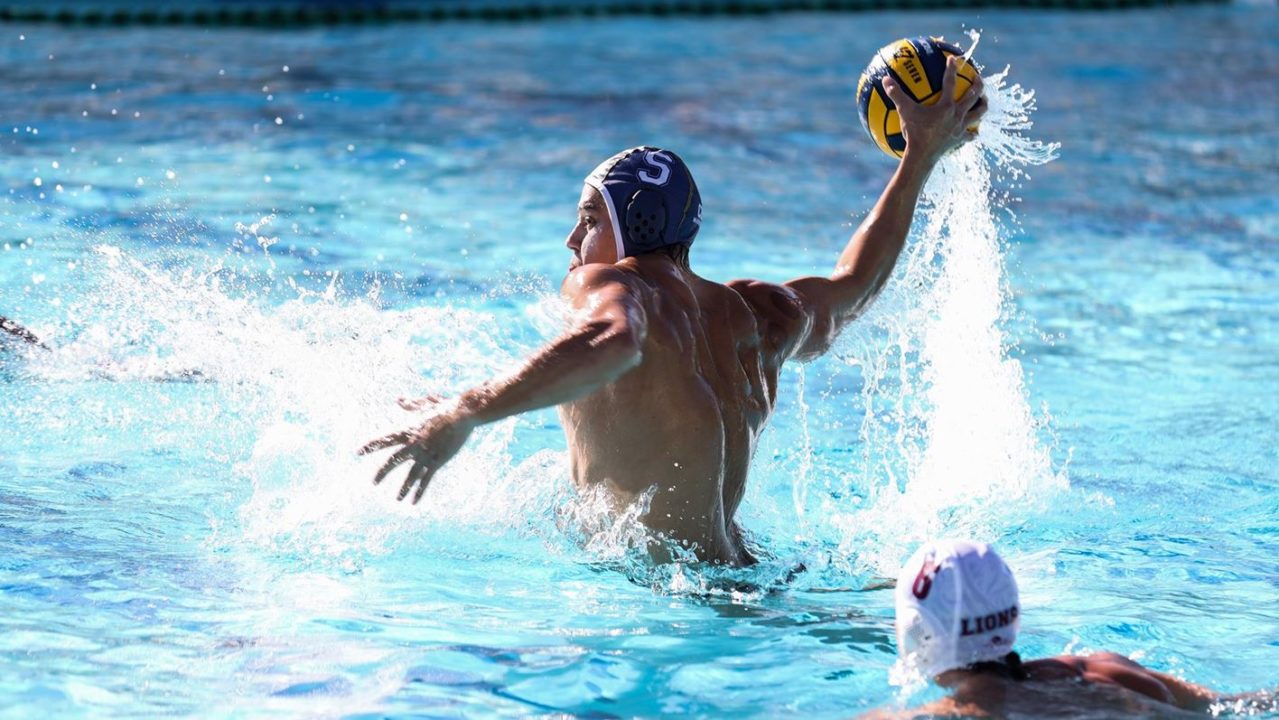 PJ McDonough led the Lancers again, as he erupted for seven more goals in the victory over the ninth-ranked Falcons. Current photo via CBU Athletics

PJ McDonough led the Lancers again, as he erupted for seven more goals in the victory over the ninth-ranked Falcons. Zach Lowery added four goals, an assist and a steal, while Hunter Barnett and Joseph Griffin scored two goals apiece.

Tristan Felberg played big in the cage for CBU, as well, as the sophomore had nine saves and two steals in three quarters. He came up with two key saves on clear shots for the Falcons in the two-and-a-half minutes to keep the Lancers in front until the end.

McDonough became just the ninth player in CBU history to score seven goals in a game. He is just the third Lancer to do it in the NCAA era and against a Division I opponent. Dominick Nevarez and Brent Teraoka are the only other two to accomplish that feat, with Nevarez scoring eight against St. Francis on Sept. 8, 2018, and Teraoka doing so against St. Francis on Oct. 21, 2016.

Ball movement was key to the Lancers’ offense, as they logged 14 assists on the day. Angel Sanchez and Caleb Teraoka had four each, while Thomas de Wit had two, as well.

HEAD-TO-HEAD
The Lancers won the three-game series over Air Force this weekend after the Falcons won the first and Western Water Polo Association game in overtime, 15-14, to start things off Saturday. CBU won the second game of Saturday’s doubleheader, 17-12, and followed it up with a one-goal win Sunday.

CBU moves above .500 for the first time this season at 4-3, while Air Force drops below at 4-5. They will play two more games to conclude the regular season back in Riverside on Friday, Feb. 26.

PLAY-BY-PLAY
CBU and Air Force matched each other goal for goal for most of the game. The Falcons took a rare two-goal lead on consecutive goals that them a 10-8 lead with 4:49 left in the third quarter.

Unfazed, the Lancers scored three-straight, with one each from Hunter Barnett, Caleb Teraoka and McDonough to go up 11-10 with 10 minutes left in regulation.

Air Force took the lead back, 14-13, with 5:24 to go, but it was short-lived. Lowery scored twice and Barnett added another to give CBU a 16-14 edge with less than two minutes to go.

Felberg made sure it lasted, as he came up with two key saves on golden opportunities for Air Force at the 2:25 and 45-second marks to wrap up the one-goal victory.

UP NEXT
The Lancers will then return home for a four-game homestand to close out the regular season. It starts with a game against Pepperdine on Wednesday, Feb. 17, at 2 p.m.

U.S. AIR FORCE ACADEMY, Colo. – Seventh-ranked California Baptist scored three straight goals in the fourth quarter and held on for a 16-15 win over ninth-ranked Air Force in a non-conference water polo game, Sunday, Feb. 14, at the Academy’s Cadet Natatorium.  The Lancers won two of the three games over the weekend, but Air Force won the conference game on Feb. 13 to clinch the top seed in the Wester Water Polo Association Championships.

CBU (4-3 overall, 0-2 WWPA) scored the first two goals of the game, but three straight by Campbell Harris, Corey Tanis and Sam Fuller gave the Falcons a 3-2 lead. CBU scored the next two for a 4-3 lead at the end of the first. Grant Snyder tied the game early in the second and then Alex Hirjoi gave the Falcons a 5-4 lead. Two goals by the Lancers and one more by Harris left the game tied at 6-6 at the half.

Air Force (4-5 overall, 2-0 WWPA) built a 10-8 lead as Hirjoi scored two and Snyder netted one. CBU took an 11-10 lead, but Gavin Jones and Harris scored as the game was tied at 12-12 at the end of three quarters. Jones and Henry Yavitt gave the Falcons a 14-13 lead with 5:24 left, but the Lancers answered with three straight as Zach Lowery scored two and Hunter Barnett added one for a 16-14 lead with 1:55 left. Snyder scored with 1:35 left and the Falcons forced a turnover with a minute remaining, trailing by one. CBU goalie Tristan Felberg made a save with 40 seconds remaining and a long shot by the Falcons at the buzzer was high.

Snyder, Harris and Hirjoi all had three goals for the Falcons. Harris led the Falcons with 10 goals on the weekend. Snyder had five points in the game and 14 on the weekend. Yavitt and Jones each had two goals in the series finale. Anthony Tolbert made five saves, had one assist and one steal.

“They are a fantastic team,” head coach Ryan Brown said. “All these games were close and came right down to the end. We have to do a better job in 6-on-5 situations. Credit their goalie, he made some big saves, but we have to be able to put shots away. We have some things we need to work on before the next couple weeks.”

Air Force is now off until a pair of non-conference games at California Baptist, Feb. 26, and then a single game at Pepperdine on Feb. 27.