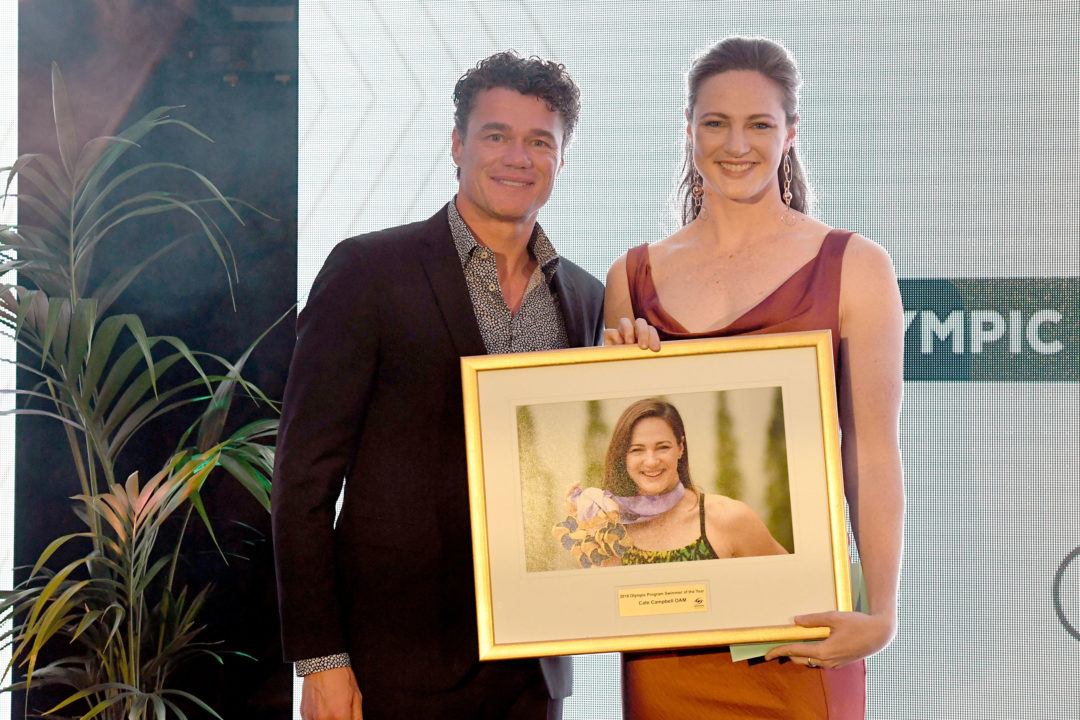 Campbell was named the Olympic Program Swimmer of the Year, while Matthew Levy won the same award for the Paralympic Program. Current photo via Swimming Australia

The 17-year old Esser, a UCSD commit in the class of 2021, swam a new best time on Friday at the Neptune Swim Invitational in Arizona.

Australian swimmer Cate Campbell was named the 2018 Swimming Australia Olympic Program Swimmer of the Year as one of 3 top prize-winners on Saturday night in Melbourne at the Swimming Australia Awards. The event, which coincided with the conclusion of the Short Course National Championships (in which Campbell didn’t race), celebrates the conclusion of the 2017-2018 season.

Obviously it was quite another disappointing year for Australian swimming, highlighted by Swimming Australia touting Campbell’s PB and meet records like she was some kind of age group swimmer.Maybe Cate needs to take yet another year off to work on her 50 Free, to climb out of her rut there and become competitive again.

Early contender for worst comment of the day! Way to come out swinging on a Sunday morning!

She won 3 golds at the Commonwealth Games, 5 golds at Pan Pacs, the 2nd-fastest 100 LC meter free in history, and broke 2 World Records. In a year with no LC Worlds or Olympics, what more was it that you would’ve expected her to do?

Are we really supposed to get excited that Cate Campbell beat Holly Barratt by .08 in the 50 Fly at the Commonwealth Games? Her injured sister–who swam with one good shoulder–beat her in the 100 Free at Commies. Not exactly the most competitive meet ever with basically two countries represented, essentially an intersquad (interfamily?) meet. Cate is in a tough place, she is on the struggle bus in her individual events esp 50 Free, but is still important to AUS in relays, so they try to prop her up because she is obviously quite temperamental.

Using this logic, Simone Manuel may as well retire, because Cate smashed her in every individual and relay event at the Pan Pacs…..think about it before clicking ‘thumbs down’….

I missed something, did Simone Manuel swim 50 Fly against speedster Holly Barratt at the Commonwealth Games? No, she was probably at home polishing her 2016 Rio 100 Free gold medal while she and Penny Oleksiak shared a good laugh by phone.

Swimobserver, agreed and well put. She had a smokin’ year. Some weird sour grapes and hatin’ going on here.

Could say the same about blume after her 100 free in euros, which was far more of a disaster than any of cate’s swims this year.

Just three years ago Cate Campbell was the only swimmer who could dream of beating super fast suit record of Steffen Britta. Now when she almost broke 52sec barrier she is even father of being world record holder than she was before. Sport knows no mercy.

After finishing sixth in the 100 Free at 2016 Olympics and only third in the world this year in the 50 Free, I think it is highly likely that by 2020 Tokyo a then 28-year old Cate Campbell does not even make it out of semi-finals in the 50 and 100 Free events.

Based on medals and swimming multiple world record times, Lakeisha Patterson should have won the para award hands down. Perhaps she has finally become too much on the nose even for Swimming Australia.

Perhaps. She was a double gold medalist at Commonwealth Games beating two S9 swimmers Tai and Cole in the 100 free in S8 WR time in the process. Well done to Levy, he also had a good, although maybe not so good, showing at Pan Pacs according to the results. And, well done to Cate Campbell I think she deserved top gong.