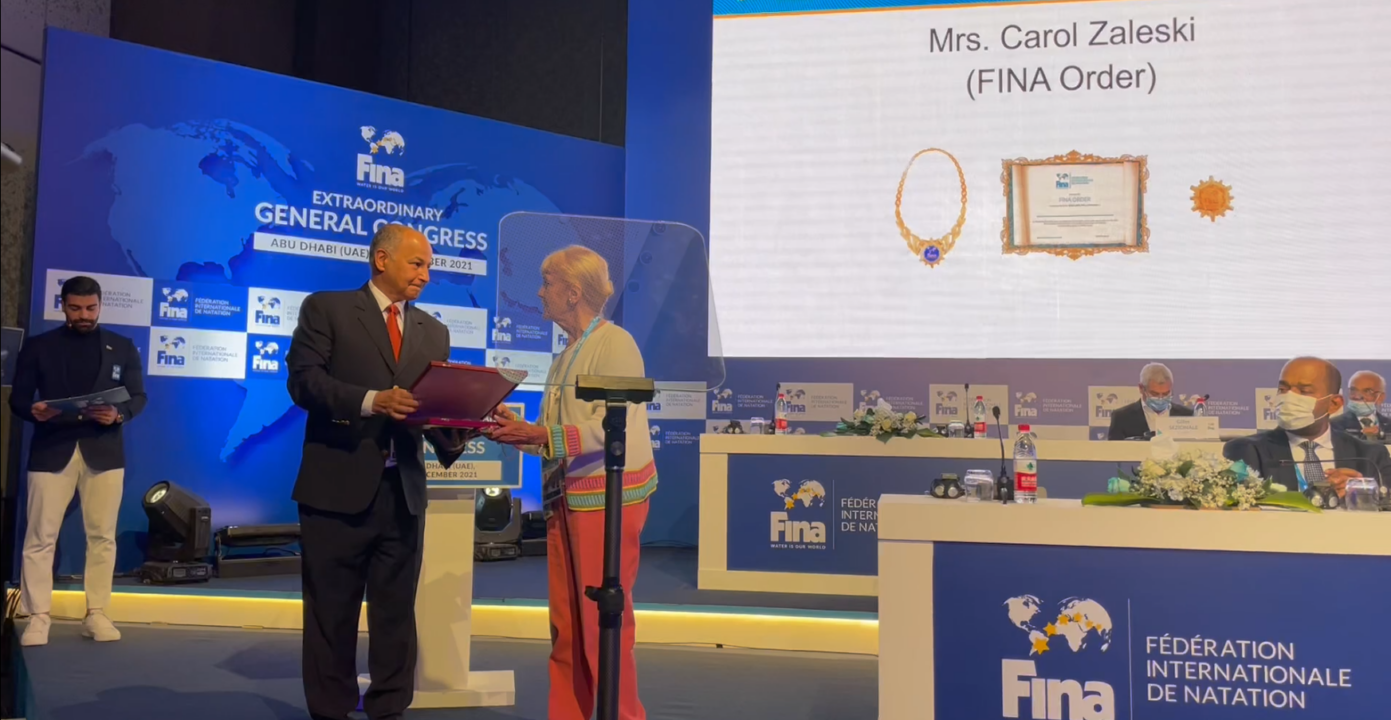 Zaleski started out as a timer at her children’s swim meets and rose the ranks to the elected role of Eastern Zone director by 1979. USA Swimming was formed the next year, and Zaleski was also elected to its Board of Directors as a member, where she remained for a record 39 years. She served four two-year terms as president beginning in 1986.

“No one before, and I believe no one after, will have such a profound impact on our sport and the way competition is managed,” FINA treasurer Dale Neuburger said. “For more than 30 years, Carol was the gold standard for efficient, effective and equitable competition management…Truly, a generational impact on our sport.”

In the late 1980s, Zaleski made history as the first female member of FINA’s Technical Swimming Committee. Her 34 years as a member and 26 years also marked the longest spans of any individual, regardless of gender.

In 2007, Zaleski helped spearhead the idea of underwater judging cameras along with Mike Unger, FINA’s Director of Sport and former COO of USA Swimming.

“We came up with the idea in 2007 from conversations with the International Relations Committee,” Unger recalled. “We ultimately put together a plan and decided to test it at 2007 Nationals. My wife and I drove the cameras across the country to Nationals so we could practice before Olympic Trials the next year.”

At the Beijing Olympics in 2008, Zaleski broke another barrier as the first female Olympic swimming deck referee. Since then, international competitions have required a minimum of two male and two female officials on deck.

“I didn’t realize what an impact I was having in the moment,” said Zaleski, who has overseen referees at the past six Olympics. “I always focused on the athlete and how to make competition fair and equitable for everyone.”

Next month, on Oct. 15, Zaleski will be enshrined in this year’s International Swimming Hall of Fame class as an honorary inductee.

Congratulations to Carol for a great career as the epitome of what a volunteer can do to positively affect the sport of swimming. Carol was always on point, always listening, always learning. Her career began as a timer for her kids aquatic team at Pitt and she worked diligently throughout decades helping swimming become more fair and more exact. From stop watches that measured in the 10ths of seconds to touchpads and video that measure in the 1000s of seconds, Carol was there championing better and more accurate judging of swimming contests. Thanks Carol! You are one in a million. Your level-headed leadership is a benchmark for all who would espouse to lead!