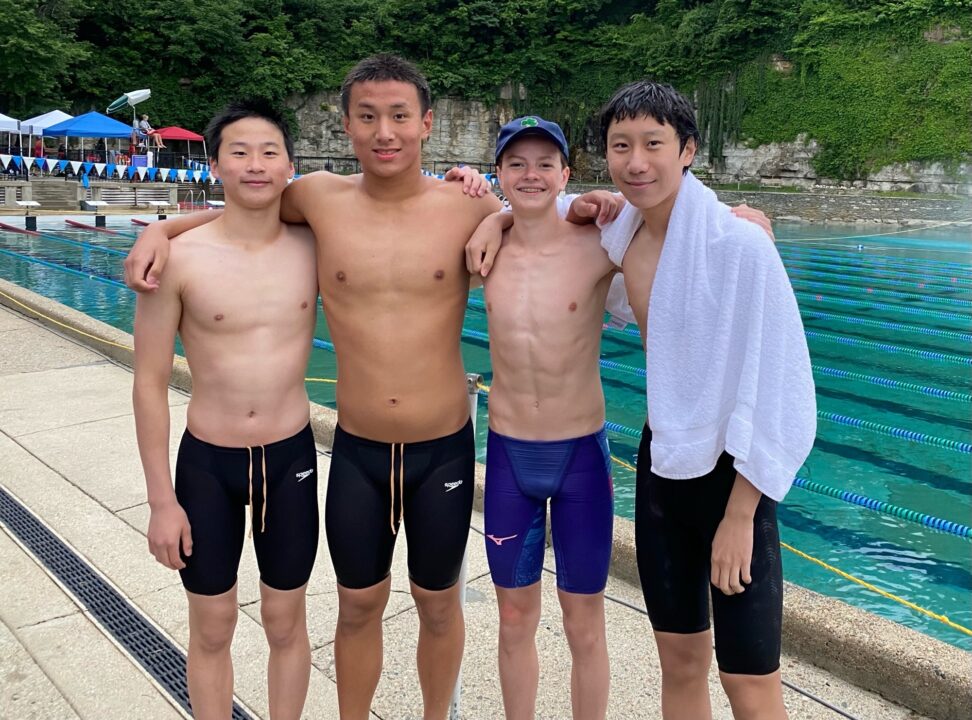 The 2nd day of the 94th Ohio Valley Championships was packed full of action, including a record-breaking performance by Carmel Swim Club in the 13-14 boys MR Current photo via Amy Lathrop

The 2nd day of the 94th Ohio Valley Championships was packed full of action, including a record-breaking performance by Carmel Swim Club in the 13-14 boys 400 medley relay. In a tough race between Carmel and hosts Lakeside, the Carmel quartet of William Lathrop (1:04.37), Ethan Zhang (1:13.43), Brian Qian (1:02.06), and Lewis Zhang (53.59) prevailed, clocking a speedy 4:13.45. Lakeside also came in under the previous meet record of 4:14.90, finishing in 4:14.13. It was a classic thrilling relay race, with Carmel taking the lead on backstroke, but falling behind through the middle 200 of the race. Lakeside breaststroker Owen Durham split 1:11.40, which was key to their taking the lead heading into the midway point of the race. Zhang’s anchor leg would prove to be dominant, however, as he would chase down and pass the Lakeside anchor, who had a lead of 1.84 seconds going into the leg.

The racing continued in the senior events, featuring many of the high-profile college swimmers we’ve previously reported on. Ohio State’s Amy Fulmer picked up her first win of the meet, taking the women’s 50 free in 26.25, narrowly out-touching Louisville’s Gabi Albiero (26.30). Indiana duo Anna Peplowski and Ashley Turak tied for 3rd, each touching in 26.82.

Fulmer would strike Gold twice on the night, coming back later to win the women’s 100 back as well, swimming a 1:02.48. Fulmer led the field by nearly a full second, with Kentucky’s Caitlin Brooks taking 2nd in 1:03.36. 14-year-old Lakeside swimmer Charlotte Crush grabbed 3rd in 1:03.60, however, it’s worth noting that Anna Peplowski won the ‘B’ final in 1:03.39, which would have been good for 3rd in the ‘A’ final.

Kentucky grabbed a win in the women’s 400 free, where Izzy Gati was able to best the field handily with a 4:16.36.

ethan zhang gets all the girls