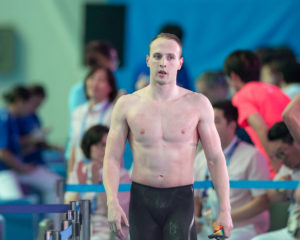 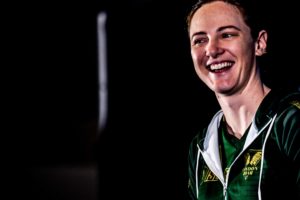 Edited for SwimSwam by Coleman Hodges.

For only the second time in history, the coveted Hancock Prospecting Australian Swimmer of the Year Award has been shared – this year by triple FINA World Championship gold medallists Bronte Campbell and Emily Seebohm.

Australia’s other double gold medalist and Commonwealth record holder from Kazan, also in the 100 and 200m backstroke, Mitch Larkin, won the coveted Swimmer’s Swimmer of the Year Award while his coach at St. Peters Western, Michael Bohl was awarded the Hancock Prospecting  Olympic Program Coach of the Year.

Swimming Australia president John Bertrand OAM made the presentation at a glittering black tie awards night at the Brisbane Convention and Exhibition Centre.

Bronte Campbell won gold in the 50 and 100m freestyle with sister Cate taking the bronze and both girls combining with Seebohm and Emma McKeon on the all-conquering sprint freestyle relay.

Campbell also seals another slice of history, joining sister Cate, the winner of the prestigious Australian Swimmer of the Year award in 2013 and 2014, as the only siblings to win the award. She also became the first Australian to win the 50 and 100m freestyle double.

Seebohm became the first Australian to win the 100 and 200m backstroke double at her fifth FINA World Championships, after making her debut in Melbourne in 2007.

It is the first time the award has been shared since Olympic golden boys Ian Thorpe andGrant Hackett were named joint winners in 2003.

The pair were also named the Hancock Prospecting Olympic Program Swimmers of the Year while earlier in the evening Seebohm shared the Speedo Golden Moment of the Year with Paralympic golden girl Ellie Cole.

The 23-year-old sat on her lane rope and smashed the water in celebration in a glorious golden moment of rejoicing a special victory.

For Cole, her performance to come back from two years away from international competition and break two world records in one day on her way to a gold medal in the 100m backstroke at the IPC World Championships in Glasgow was worthy of sharing the moment with Seebohm.

But it was Newcastle’s Commonwealth Games gold medallist Maddie Elliott who was named the Paralympic Swimmer of the Year for her gold medal-winning, world record breaking swims in Glasgow.

The AIS Discovery of the Year Award wet to 13-year-old Ravenswood Year Eight student Tiffany Thomas Kane who made an historic debut in the women’s 100m breaststroke SB6, winning gold in a world record breaking time.

Thomas Kane, who was born with hypochondroplasia and is a girl of short stature, clocked a new world record time of 1:34.95 to claim the gold medal at her first international meet, after her world record breaking efforts at the Australian Championships in Sydney in March earned her selection on the Australian Dolphins team.

Above is a press release, courtesy Swimming Australia.