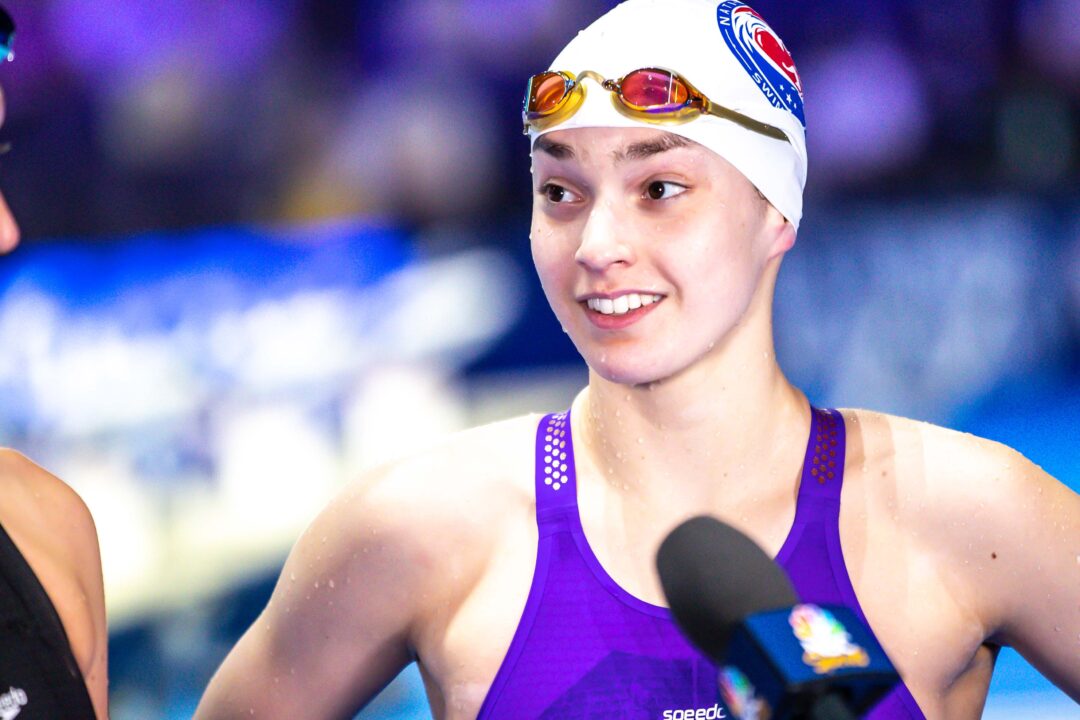 Spink's 100 free was a best time by over half of a second. It also was much faster than her 56.08 which she swam at US International Team Trials in April. Archive photo via Jack Spitser/Spitser Photography

Highlighting night 1 of NCSAs in Indianapolis, Indiana was Camille Spink of Nation’s Capital. Spink won the women’s 100 free in a 54.73. Spink smashed the meet record previously held by Abby Jagdfeld who swam a 55.98 back in 2014. Spink’s time places her at #15 in the 17-18 age group of all-time.

Spink’s time tonight was a huge personal best as her previous best time stood at a 55.25 which she swam at Wave I Olympic Trials last summer. Spink competed in the event at 2022 US International Team Trials in April where she swam a 56.08 to finish 23rd.

Also winning two events on the night was James Ewing of Arlington Aquatic Club. Ewing won the men’s 200 backstroke swimming a 1:59.19. He was the only swimmer under the 2:00 mark. That was also Ewing’s first time under the 2:00 mark as he previously held a best time of 2:00.20 which he swam at US International Team Trials to finish 12th.

JoJo Ramey of Fishers Area Swim Team captured the win in the women’s 200 back swimming a 2:10.64. That time was a season best for Ramey as she swam a 2:10.92 at US International Team Trials to finish eighth. Ramey holds a best time of 2:08.90 from Wave II Olympic Trials last summer.

Finsihing second in the women’s 200 backstroke was Emily Hamill of Germantown Academy Aquatic Club. Hamill swam a 2:11.36. That was a huge drop for Hamill and now marks a drop from a 2:19.13 in the event at this meet a year ago.

Cade Duncan of Dads Club Swim Team swam a 50.76 to win the men’s 100 free. That was a best time as his previous best stood at a 51.05 which he swam at International Team Trials to finish 36th. Duncan has now dropped almost a whole second in the event over the last year going from a 51.72 last summer to a 50.76 this summer.

Winning the women’s 1500 freestyle was Alexandra Bastone of Chelsea Piers Aquatic Club as she touched in a 16:56.80. She was the only swimmer under the 17 minute mark and dropped over 31 seconds off her seed time. Bastone’s previous best time of 17:27.82 was from last summer’s Richmond Futures.

In the men’s 800 free, Giovanni Linscheer of Cor Swimming won in a 7:58.79. Linscheer won the event by over five seconds. That was a huge best time for Linscheer as his previous best stood at a 8:07.35 which he swam at International Team Trials to finish 12th.

In the quickest event of the night Lakeside Swim Team’s Charlotte Crush won the women’s 50 fly in a 26.89. That was faster than her 26.93 which she swam in prelims at International Team Trials. Kristopher Lawson of Nation’s Capital won the men’s 50 fly in a 24.71.

It is Nolan Dunkel, not Dinkel

I believe miss Spink is headed to Tennessee. This your crop of sprinters will be fun to watch at the ncaa level