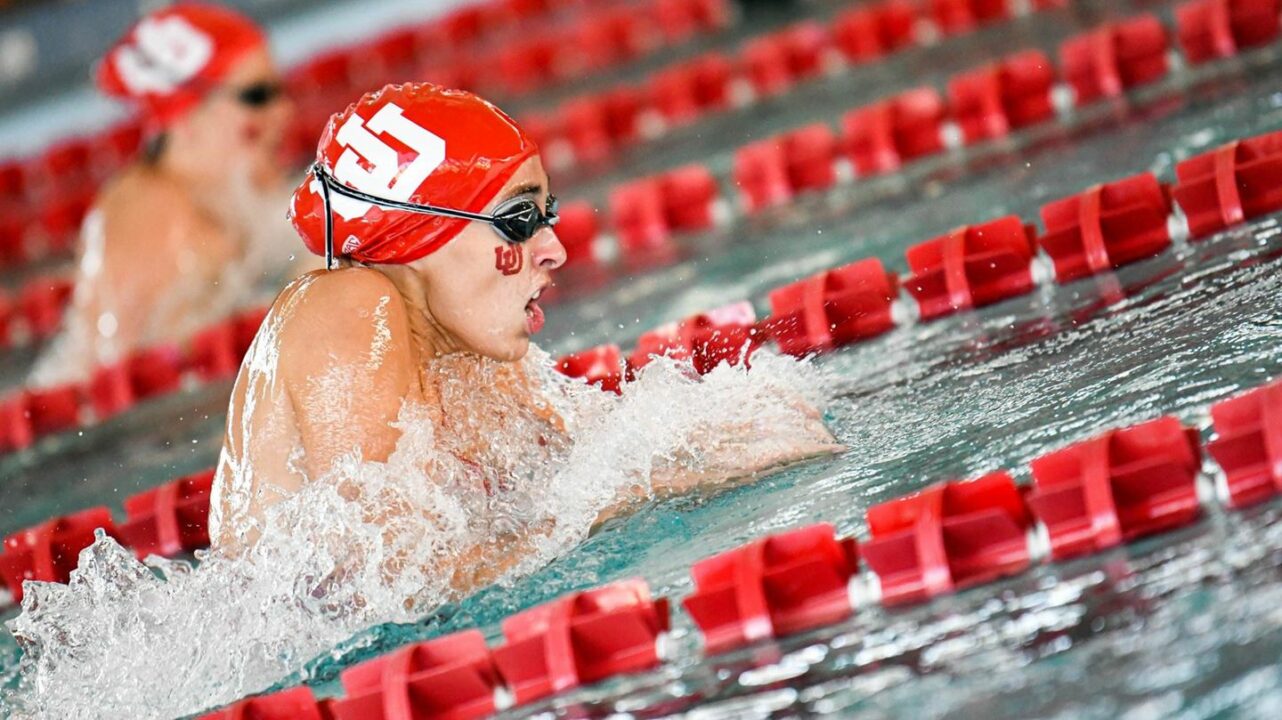 The Cal women defeated Utah on Friday, winning 12 out of 14 events, including both relays. Ayla Spitz, Sarah DiMeco, and Isabel Ivey all won two events each. Stock photo via Utah Athletics

The sixth-ranked Cal women defeated the Utah women on Friday 160-100, winning 12 out of the 14 events in the process.

Since 2017, the two teams have gone head-to-head three times, with Cal winning each time, including this one. This meet, however, marked the smallest point difference between the two teams, with Cal only winning by 60 points, compared to 73 and 72 points the two prior meets. This is also the first time since Cal visited Utah for the series since 2017, with fifth-year Robin Neumann the only swimmer who swam at both away meets for Cal.

The last time the Golden Bears participated in a dual meet was against UVA in mid-October, and at that meet, Spitz took second to Ivey in the 200 free, swimming 1:47.26 to Ivey’s 1:45.27. On Friday, though, Ivey didn’t swim the 200 free, and Spitz took home the win.

Spitz also just missed her season best of 2:01.05 in the 200 back, set at the Chick-Fil-A Invite. With the conversion, she would beat it.

Another individual event winner for Cal was Rachel Klinker in the 200 fly, with a time of 2:00.09. Klinker ended last season as the Pac-12 winner in the 200 fly, and her time at that meet (1:52.82) placed her fourth on Cal’s all-time best list in the event. At the 2021 NCAA championships, she placed ninth in the event. At this meet, she was about three seconds off her season-best time of 1:57.82, set at the Chick-Fil-A Invite.

Utah won two individual events. Senior Leyre Casarin won the 50 free in 23.25. This is her fastest swim of the season, beating her previous best time by a tenth of a second. Charity Pittard won the 200 breast in 2:19.04, also her fastest time of the season.

“We had a solid day today and our schedule didn’t get any easier bringing in another top six ranked team, who’s been right there fighting for national titles over the last few years,” said Utah head coach Joe Dykstra in a news release. “They are loaded with national team members and Olympians but we went hard. We raced hard, went stroke for stroke in a lot of events and even came out with a win in a few of them.”

The Utah women’s swimmers return to the pool Dec. 3 for the Princeton Invite, while the Utah women’s dive team will compete at the Texas Diving Invitational in late November. The Cal women return December 1 for the Minnesota Invite.

Cal women were quite quick in the Utah pool. Toss that excuse for the Stanford performance.