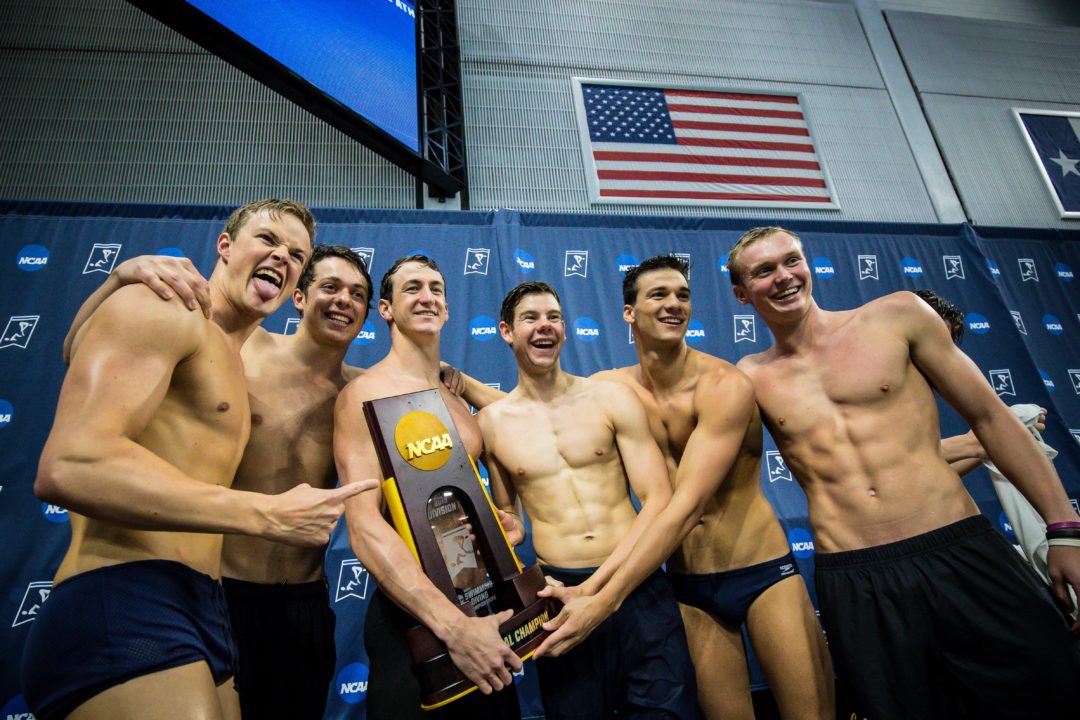 The Cal men's swimming & diving team are the defending NCAA Division I Champions. The school revealed Monday that its semester would start fully virtual. Archive photo via Jack Spitser/Spitser Photography

Cal, home to the defending NCAA Division I Champions in men’s swimming & diving, will hold no in-person classes when the fall term starts, Chancellor Carol Christ announced on Monday. She added that the school is continuing to prepare to move to a hybrid model when “public health conditions allow.”

The decision is not expected to impact the ability of intercollegiate athletics at Cal, according to a statement made by the school.

While the fall semester will begin with fully remote instruction, we anticipate athletic activities to proceed in accordance with current protocols and in compliance with the Berkeley Public Health Order. Campus remains open, including student housing, with the expectation that in-person instruction will be available when public health conditions allow.

The California State University system announced in May that all 23 of its campuses would remain closed, with limited exceptions (like nursing courses and labs) that would allow in-person instruction.

Cal started the fall 2019 semester with 43,204 students enrolled, including just over 31,000 undergraduates. The school first suspended in-person instruction on March 9.

After the Pac-12 Conference announced that its football, women’s volleyball, and women’s soccer teams would move to conference-only play for the fall 2020 season, the Cal football team’s first game isn’t until September 26th against Utah. While swimming & diving are considered winter-season sports, last year’s season opener for the Cal swimming and diving teams were on September 20th with the annual King & Queen of the Pool meets against Cal Poly.

Neither swimming & diving program at Cal has published a 2020-2021 season schedule yet.

The Cal men were the 2019 NCAA Champions in swimming & diving, though they didn’t have a chance to defend their title in 2020 as the NCAA Championship meet was ultimately canceled because of the ongoing coronavirus pandemic.

The Cal men won their 3rd consecutive Pac-12 Championship in 2020, while the Cal women finished 2nd behind rivals Stanford.

The two teams combined had more national success than any other male/female combo team in Division I swimming in the 2010s. The Cal men won 4 NCAA titles in that span, never finishing lower than 2nd place. The Cal women won titles in 2011, 2012, and 2015 (and 2009 just before the decade began) and placed in the top 2 in 7 out of 10 seasons.

While California, like many other states, has seen an explosion in new positive tests for coronavirus over the last month, most of that has been in the southern part of the state. In Alameda County, where Cal is located, there have been 9,404 positive tests for coronavirus leading to 167 COVID-19 attributed deaths. With about 10 new cases/100,000 population, in a county of 1.6 million, the rates in Alameda County are growing at about one-third of the rate of places like Los Angeles County. Alameda County, however, leads the Bay Area in hospitalizations, with 159 COVID-19 patients currently receiving treatments in hospitals.

Why are athletes so special ?

The Tv deals bring in money and exposure

Professors and other instructors don’t want to be around the students until there’s a vaccine that works and it’s totally safe for them to teach the usual way.

But their bartenders and waiters at their favorite cafe have to keep serving them as usual…….