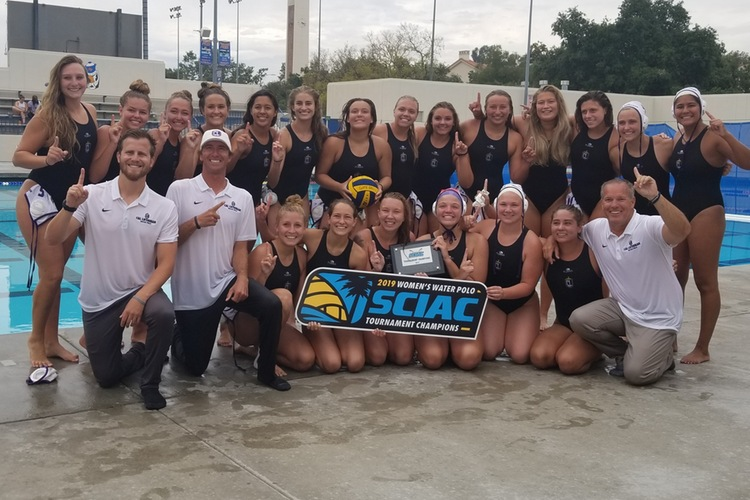 It’s Cal Lutheran’s second SCIAC Championship, and first since 2009, when they went undefeated in conference play with a 10-0 record. The Regals denied the Sagehens’ shot at a three-peat and also snapped a nine-game losing streak to them.

Cal Lutheran entered the game as the No. 2 seed and had a tall task of knocking off the No. 1. Pomona-Pitzer came in unscathed in SCIAC play as CLU gave the Sagehens their first SCIAC loss since March 25, 2017.

The Regals got on the board first and had an early lead as Mackenzie Thomas and Christin Hirn made the score 2-0 just three minutes in. Pomona-Pitzer outscored the Regals, 3-1, the rest of the way and the score was tied at the end of the first. Lexi Rond scored her first goal of the game in the quarter.

Bailey Meyer and the defense came out with something to prove in the second quarter. The Regals shutout the Sagehens through seven minutes and 40 seconds as Rond and Nikki Roed put CLU up 5-3. Pomona-Pitzer finally scored with 20 seconds left in the half as the Regals had a 5-4 lead at the break.

Pomona-Pitzer took control of the game in the third quarter as the Sagehens tried to complete their three-peat. They scored two quick goals and took a 6-5 lead just two minutes in. PP added another goal on their next possession and took its biggest lead of the game, 7-5. Jessica Diaz cut the lead to one before the Sagehens responded, pushing the lead back to two. Victoria Rose Meek ended the third quarter by scoring with 46 second left, cutting the lead to one possession.

Cal Lutheran tied the game quickly into the fourth as Meek added her second goal of the game, but Pomona-Pitzer took the lead back, scoring just one minute later. The game came down to the final five minutes. It was CLU that answered the bell as Rond recorded a hat trick and tied the game at 9 with 4:37 left in the game.

The Regals then took the final lead as Hirn found the back of the net with 3:18 left. The defense and Meyer did the rest as Cal Lutheran claimed the championship with a score of 10-9.

Meyer recorded eight big saves and added one steal and one assist. The defense stepped up big, holding PP to one goal in the second and fourth quarters. Mardell Ramirez and Thomas led the team defensively with two steals each.

Rond tallied her hat trick to pace the offense and Hirn and Meek added two more apiece. The Regals moved the ball around and recorded six assists on the 10 goals, with Ramirez dishing out two. Cal Lutheran had plenty of power play opportunities, to try and convert on goals, with Meek and Rond recording four and three, respectively.

With the win, the Regals (21-8) advance to the NCAA Division I Tournament. The selection show is set for Monday, April 29th, at 8 pm ET as Cal Lutheran will find out their next opponent.

CLAREMONT, CA. – The Pomona-Pitzer Women’s Water Polo team came up just short in their quest for a three-peat with a 10-9 loss to Cal Lutheran in the SCIAC Tournament Championship on Sunday afternoon at Haldeman Pool.

Season Impact: with the loss, the Sagehens end the year 20-13 overall and suffer their first loss to a SCIAC school since March 25th 2017.

The Sagehens were led by Anna Yu and Natalie Hill who each shared a team-high two goals in the loss.

The Regals got out to a good start in the first as they notched the first two goals of the day to take an early 2-0 lead. Kyla Pickell scored the first goal of the game for the Sagehens but Cal Lutheran responded with a goal to take a 3-1 lead.  The Sagehens ended the first with two goals as Hill netted her first of the game and a five-meter penalty by Lucie Abele tied the game at 3-3 heading into the second.

Cal Lutheran controlled the second period and kept the Sagehens off of the board for the majority of the eight minutes.  The Regals netted two goals to extend the lead to 5-3 and the Sagehens cut the lead down to one just before halftime as Bella Villa scored to trim the deficit to one goal at 5-4 at the break.

Pomona-Pitzer got back on top in the third as they outscored the Regals 4-2 in the period. Yu started out the third with back-to-back goals and Nadia Paquin scored as well to make it three-straight to take a 7-5 lead, but Cal Lutheran scored two of the final three goals of the third to cut the Sagehens’ lead down to 8-7 heading into the fourth.

The Regals quickly tied the game in the fourth with a goal within the first two minutes of the period to bring the teams even at 8-8. The Sagehens reclaimed the lead after a goal by Hill with 5:38 left to play but the Regals went ahead and tied the game with 4:37 left to play and scored the go-ahead goal just under a minute later to take a 10-9 lead with three minutes remaining.  Pomona-Pitzer had a chance to tie late in the fourth but the ball struck the post and bounced away from goal as the Regals were able to keep possession and play keep away for the remainder of the game.