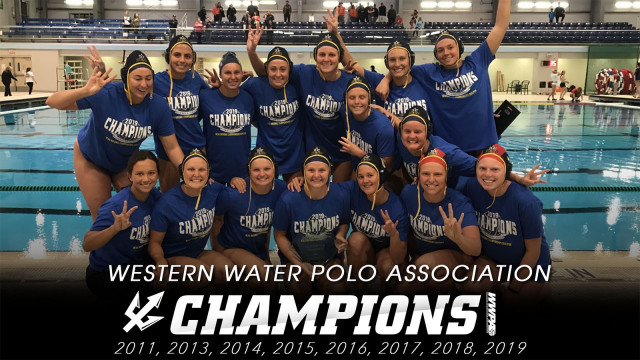 The University of California San Diego women’s water polo team climbed back to the apex of the Western Water Polo Association on Sunday, winning the WWPA Championship with a victory over Fresno Pacific in the tournament final, 15-4, at the SPIRE Institute. Current photo via UC San Diego Athletics

GENEVA, Ohio — The Tritons are back on top!

The University of California San Diego women’s water polo team climbed back to the apex of the Western Water Polo Association on Sunday, winning the WWPA Championship with a victory over Fresno Pacific in the tournament final, 15-4, at the SPIRE Institute.

UC San Diego (21-13) wins the WWPA Championship for the seventh-consecutive season and eighth time overall, and will make its seventh-straight appearance in the National Collegiate Water Polo Championships. The Tritons will learn their NCAA fate during Monday evening’s NCAA Selection Show beginning at 5 p.m. PT.

Playing in their final season in the conference, the Tritons have now won 17 WWPA tournament games in a row and 45-consecutive WWPA contests overall.

Onstott was named to the WWPA All-Tournament Second Team.

Sunday’s game was close early on after consecutive goals by Mangrum tied the score midway through the first quarter, 2-2. However, the Tritons scored the game’s next 11 goals. Onstott’s score off an assist from senior Riley Heiduk capped off scoring surge, extending the lead to 13-2 with 4:17 left to play.

GENEVA, Ohio – The Fresno Pacific women’s water polo team fell to the nationally ranked, one-seeded UC San Diego Tritons 15-4 in the WWPA Championships title game to take second overall in the conference. It is the highest conference finish for the Sunbirds in program history and ends a successful late-season run that saw the ‘Birds post a 7-2 record to close the year.

HOW IT HAPPENED:
• The Tritons opened the scoring, putting up three goals before FPU’s Savannah Mangrum punched two of her own through to bring the tally to 3-2.
• UCSD proceeded to go on an 11-0 run, shutting the Sunbirds out of the cage through the second and third periods.
• A goal from Jenna Collins and a third from Mangrum put FPU on the board again in the fourth, but the high-powered UCSD offense proved too much for the Blue and Orange. Final: 15-4.

STATS:
• Mangrum recorded a hat trick and a steal, Katie Kisling and Sam Witt added one assist apiece and Madeline Frey picked up five saves in the loss.
• FPU held the Tritons to 1-8 on power plays while converting on one of their seven opportunities.
• The Tritons posted a .500 shooting percentage while holding the Sunbirds to .154.
• UCSD received a pair of hat tricks from Ciara Franke and Taylor Onstott, while goaltender and tournament MVP Reilly Gallagher picked up 11 saves.

BEYOND THE BOX:
• Three Sunbirds were named to the WWPA All-Tournament Teams:
Sam Witt (first team) – totaled nine points on four goals and five assists during WWPA Championships play. Also swiped four steals and drew three exclusions.
Savannah Mangrum (first team) – her balanced contributions during the conference tournament included five goals, five steals, a field block and a 2-for-3 sprint record.
Madeline Frey (second team) – led the Sunbird defense with 30 saves, highlighted by a 13-save effort (career high) in the Sunbirds’ victory over Cal State East Bay in the semifinals.
• The second-place WWPA conference finish is FPU’s highest post-season mark in program history. The Sunbirds, who graduate four seniors this season, look to continue to be contenders going forward.
• It was the seventh year in a row that UC San Diego clinched the conference title. Ranked #14 nationally, the Tritons amassed a total of 55 goals over the course of WWPA Championship play.