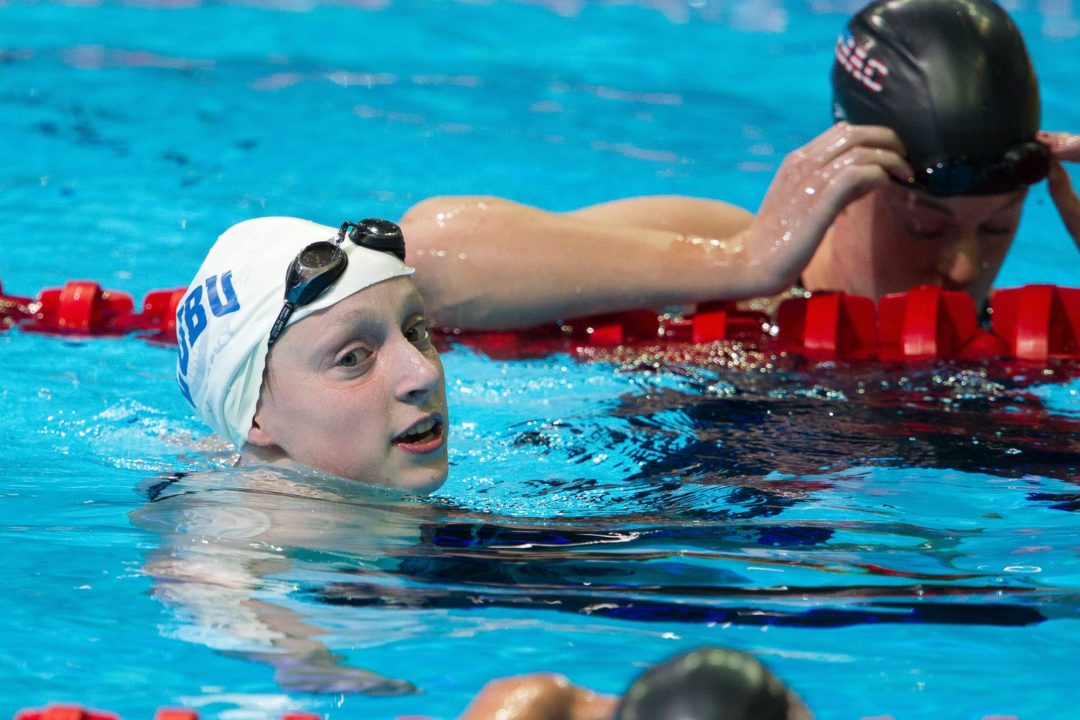 And the other shoe dropped. Putting an end to at least one train of the coaching carousel today, Cal men’s head coach Dave Durden has hired NCAP coach Yuri Suguiyama as his newest assistant.

Suguiyama’s star rocketed this summer as the coach of 15-year old Katie Ledecky, who won Olympic gold in the women’s 800 free and broke Janet Evans’ American Record. As the head coach of CUBU’s Georgetown site, he went from somewhat of a largely anonymous, albeit solid, coaching role to America’s hottest coaching name. Among many other honors, he was recently named the Potomac Valley Swimming Coach of the Year.

“We approached this opportunity looking for ways to enhance and improve our program,” Durden said of the hire. “As we moved through the month of September, it became more and more evident that Yuri is the coach to help us do just that. I have watched Yuri’s career over the last six years. His intellect, his organization, and the culture he promotes within his environment are the very aspects we value within our Cal swimming family. We happily welcome him to the pool deck, and I look forward to working side by side with such a great coach and great person.”

With so many coaching changes happening so late in the year (pushed back because of the Olympics), at some point there were going to be a few big-name club coaches making the jump to the NCAA level to wrap things up.

Suguiyama, though not to be pigeonholed into one specialty, obviously has had success with training distance swimmers: which fits right into where Cal is moving with recruiting big-name distance swimmers like Janardan Burns.

Fans of the Cal women will find this move just as interesting, as the speculation about a possible Ledecky-to-Cal commitment down the line will be an obvious leap. Of course, there’s plenty of time before Ledecky has to make a college decision.

Suguiyama will replace Greg Meehan, who took the head coaching job with the Stanford women a few weeks ago.

In a fun little twist of fate, while Durden was at Maryland, he coached Suguiyama’s sister Erica.

We’re working on finding out who Ledecky will train with at NCAP now that Suguiyama has moved on, and will bring you that report as soon as the information is available.

Great pick for Cal but Yuri Suguiyama deserves to be head coach of something. He has made a fantastic great incredible amazing job with Katie Ledecky. I hope it will not affect her in the future and she will continue to improve. Don’t forget I have predicted 4 gold medals for her next year in Barcelona in the 400 free, the 800 free, the 1500 free and the 4X200 free relay.

Barcelona? She’s going back to 1992? Well, it WILL be fun to watch her race Janet Evans…

World Championships are in Barcelona this summer.

hey everyone– I know Katie better than you do!! lameeee

I am only saying that I swim at Prep 3x per week and since this season started, she has been there maybe once per week, whereas before London she was there almost every day. But If you’re in her training group I defer to you. Glad to hear her training is going well, with or without Yuri.

I’m sorry, Katie has been training with Yuri at the Prep Site regularly. I too have a swimmer in her group and can absolutely tell you she’s been there training regularly. Both Katie and Yuri have been busy with speaking engagements associated with their wonderful win at the Olympics. Also, the team have new schedules to maximize practices for each age group. If you are only there 3 times a week, you only have half the picture. Katie and her group have practices available 7 days a week. (Sundays at a different location which is offered to give kids more homework time in the week.) Please do not make assumptions without knowing all the facts.

lol @ I swim at whatever pool you’re talking about 3 times a week and I never see her!

I swim at Georgetown Prep where Katie used to train every day before she won gold and can tell you for a fact that she is no longer there every day. Maybe once a week that is all. I believe she trains at AU the other days. I don’t know why Yuri no longer coached Katie on a regular basis after London but find it hard to believe this was a decision made by either Yuri or Katie but rather another idiotic move on the part of CUBU/NCAP and maybe the final straw for Yuri. A HUGE loss for DC/MD/VA age group swimmers. I saw him coach every day. Fantastic coach and equally impressive person.

BTW if I have not mentioned it before that was an amazing performance in London.

Even for older swimmers this stellar stuff is very unsettling . Very few return to their ld schedule & ways.

Jg – AU is American University, another branch of the same club. Tim Kelly is the coach there, and it’s where Yuri previously worked before he got his own site.

Thanks. I took the oportunity to read up on AU again. I have a liking for understated methodist architecture. Plenty to see there.

0
0
Reply
Chill out
Reply to  DistanceSwimmer

As a member of Katie’s training group I can say that this was not an idiotic move by NCAP but an unexpected career change by Yuri. Your confusion about Katie’s training habits stems from the fact that Katie and her group train at American University and Connecticut Belair, and rarely at GP, during the summer. Katie’s been making a normal transition and is swimming faster than ever.

0
0
Reply
DistanceSwimmer
Reply to  Chill out

Katie may be swimming faster than ever but that’s not my point. My point is that she is no longer training on a regular basis with Yuri. She swam at Georgetown Prep all last year (where Yuri coaches) and yes she does swim at Connecticut Belair but only in the summer (it’s an outdoor pool). It just seems odd that she would no longer be training with Yuri given the success of the past year. Perhaps it was a decision that was mutually agreeable to all. If you know why Yuri is no longer her coach please enlighten us.

Well distance swimmer you are incorrect. Katie is training with Yuri regularly and with her normal group. When she swims at AU it is with her group when they swim there. You may realize that she has had a number of special events in the post-Olympic period and she’s missed a few days of practice for them — but visits to the White House and the like are about the biggest drama going on in the group with the notable exception of Yuri’s departure to Cal.

0
0
Reply
Chill out
Reply to  DistanceSwimmer

My point was that she has been regularly training with Yuri post-Olympic. I don’t know where you’re getting the idea that she hasn’t been.

It makes me a little sad to hear that the only route to an Olympic/World Championship coaching position is through the Division I NCAA ranks.

DI coaches are skilled and experienced, but they get the best athletes in the country at the point when they are entering their prime. The developmental coaches who spent years creating them often get little or no credit.

I wish there was a way to get them the recognition and accolades they deserve.

They do get cash money…so they aren’t totally left out in the cold. There is a grant program that rewards up to three coaches per swimmer.

I have seen some age group coaches get $7.000 a year because they coached Olympians or World Record holders in their younger years.

Short-term money is nice, but having “Oympic coach” or “World Championship coach” on your resume is probably worth $7,000 per year in salary to a club coach applying for a job. Reputation and resume will get you guaranteed money, which trumps incentives every time. If you were hiring, wouldn’t you offer more to that coach?

I mean, it’s not like you wouldn’t be able to put “Coach of (Olympian)” on that resume. Not as glamorous, obviously, but if you’re applying for a swim coaching gig you’d hope they’d get properly credited with it.

There are a select few–Bob Bowman is certainly one of them (I know he coached at Michigan but I’m still under the impression that he did that partly to give Michael a change of environment…part of the natural growing up process). Todd Schmitz has said that he likes club coaching and hopes to continue expanding the STARS club—and that he doesn’t plan to coach at the college level. (Many speculated colleges would offer him a position in order to attract Missy).

But unfortunately it doesn’t seem like a well-worn path unless the stars align and a swimming prodigy comes along (under their tutelage, of course).

Wish Katie (and the rest of NCAP) the best of luck! And congrats to Cal… Read more »

The old college coach vs club coach (in terms of who is better) is an interesting one. Colleges do get the highest level by-products of knowledgeable club coaches who often create/develop fast swimmers rather than be ‘handed’ talented,hard working athletes (not to mention older and more experienced than 18 and under).

I think I just made an argument for the club coach (or at least one(s) who consistenly produces the top 18 and unders in the US). From personal experience, I see far more college swimmers fail rather than succeed from D1-D3, but there are a number a variables outside the realm of coaching that fall into the reasons for the ‘failed’ college swimmer.

uhh…. what care to elaborate on what the rumors are?

Nope, but I think if confirmed most will be pleased with the selection.

Can’t beleive Katie’s new coach has yet to be revealed. Thought SwimSwam would have dug this up by now…. I’ve certainly hear the rumors. Guess they’re only rumors at this point.

We’ve heard the same ones. We’re trying to get someone to confirm them.

Patience…
It’s a great opportunity for Yuri, but this is a very sudden and wrenching change for the whole training group, including Katie. They’re in good shape but there’s definitely a cascade that has to happen.

does this sound eerily familiar to Paul Yetter @ Auburn??????

Not that I am bashing Yuri but club vs. college is two different animals

College and club are two different beasts, but many have transitioned successfully, and Yuri will not be an exception.