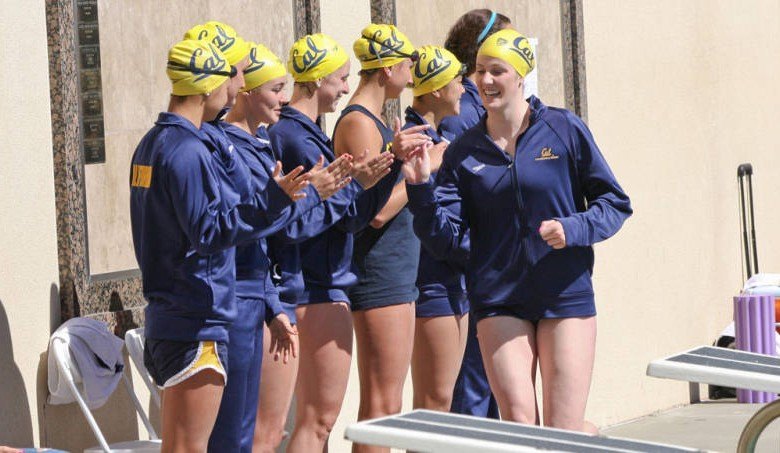 Missy Franklin and her freshman classmates dominated the show vs. Washington State at Spieker Aquatics Complex. photo via Skip Stubbs

The freshman class from Cal was the headliner today in the PAC-12 match up between the Bears and the Cougars from Washington State. WSU made their way to their second NorCal PAC-12 competitor over in Berkley this afternoon. The Cougars fell the their second California team this weekend, 164-89.

The Bears won all events today, but the freshman rookies won 6 of the 12 events, plus were anchors on both victorious relays.

Always the big story out of Cal is freshman, multi-time Olympic and world champion Missy Franklin. She teamed up with Kelly Naze, Melissa Bates, Alicia Grima to win the 400 MD-R, where her 48.09 anchor leg surpassed the B & C relays to win.

McKeever split up her very deep squad over four relays. Melanie Klaren (55.97-backstroke) was on the B relay, Yvette Kong (1:02.30-breaststroke) was on the C relay, Farida Osman (54.29-fly) on the D relay, and Franklin was on the A. And those four aren’t even McKeever’s fastest options for the medleys. The Bears swept this event, 1-4, but only two could score in the duel meet setting.

Unlike her first duel meet, Franklin got to show off one her specialties at Spieker – the 100 backstroke. She finished almost a second ahead of the field at 54.37.

Freshman Marina Garvia, an Olympian and World Championship finalists from Spain in the breaststroke events, won the 1000 freestyle, 10:20.53. She would later take the 200 breaststroke at 2:17.51, three second ahead of the next finisher. Garvia can look to fill in the distance breaststroke void of Leverenz’s graduation.

Osman, an Egyptian who is another freshman Olympian and World Championships competitor on the Cal roster, prevailed in the 50 free (23.56). Emma Johansson and Haley Rose Love had solid sprints for the Cougars finishing 2-3 at 24.00 and 24.21.

Osman would later also win the 100 butterfly individually, after having the fastest split on the medley (55.07). Just like Franklin in the first relay, she would swim the anchor 50 leg on the winning 200 free relay.

“Queen of the Pool” Celina Li battled with Franklin in the last individual event of the afternoon. It was battle then, with Li’s breaststroke being key to her win at that meet, which was the same case here in the individual medley event.

After the meet, the entire team signed autographs for the fans in attendance. Franklin was interviewed after the meet –

“I remember the first time I ever swam in this pool,” Franklin said. “That was the first time I’ve been able to sign Missy with Bears underneath. It’s so surreal and I know it sounds so unbelievably corny, but seriously, it’s a dream come true. This has been the best decision I have ever made to be part of this team and to swim collegiately. What Teri does with the team is absolutely incredible. We’re not just a team, we’re a family. It’s incredible the relationships I’ve been able to form and relationships I can see forming. And I know they’re going to keep getting stronger throughout the season.”

Washington State is pack in action in another PAC-12 duel versus Southern California at home October 18th.
Cal will swim at the Early Bird Invitational October 11-12th in Fresno, CA next.

Actually I’m quite fine with all the unfair attention they are enjoying, despite their performances proving to be quite lackluster and undeserving of such lavish praise so far.

Come March and my sneaky suspicion is the current title holders are going to be walking all over the much touted Bears and other pretenders to the throne. Which will make this all the sweeter!

Umm… that was actually my attempt at a sarcastic joke.

CAL is still the hot favorite to win NCAA next year.

Which is it – “makes me mad” or “actually quite fine” with the attention Cal is getting?

I’m going to borrow what Korn said in the men’s article:

“if that is all they got, I dont’ think it is enough to win ncaa’s this year”

Rachel Acker swam last weekend at Oregon State, but she’s injured since she was wearing a sling yesterday.