Dubai Children To Have Their Own Swimming World Cup 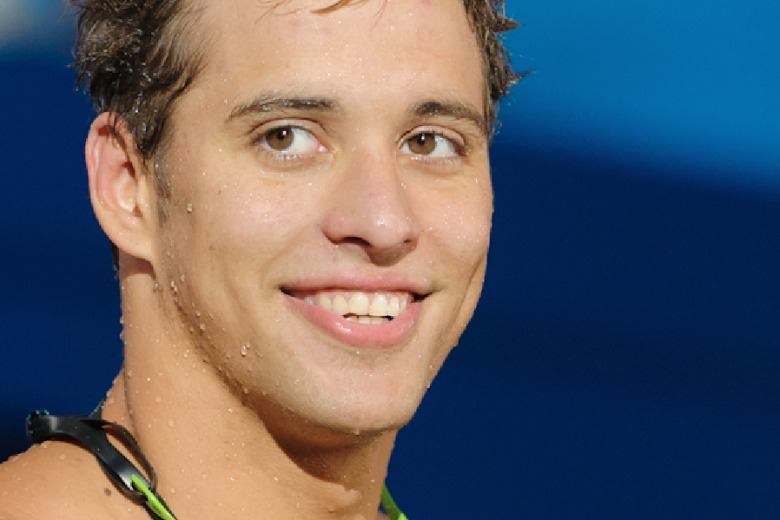 The golden boy of the London Olympics, and already a Dubai crowd favourite, South African Chad Le Clos, and Tunisian distance superstar Oussama Mellouli will be on hand to meet the children and sign autographs after the Children’s World Cup races on both Thursday 17 and Friday 18 October. photo via Victor Puig

Children in Dubai will have a unique opportunity to meet two of the hottest stars in international swimming, as well as participating in their own special Children’s Swimming World Cup during the FINA Swimming World Cup on 17-18 October, organisers announced today.

The golden boy of the London Olympics, and already a Dubai crowd favourite, South African Chad Le Clos, and Tunisian distance superstar Oussama Mellouli will be on hand to meet the children and sign autographs after the Children’s World Cup races on both Thursday 17 and Friday 18 October.

Le Clos won himself a dedicated legion of fans and was adopted by the local crowds after spectacular performances in the World Championships (25m) in Dubai in 2010, and again in the Dubai leg of the 2011 FINA/ARENA Swimming World Cup, when he blitzed the competition and went on to take the overall title for the year. Le Clos then cemented his golden boy status when he did the unthinkable at last year’s Olympics, beating Michael Phelps to take gold in the 200m butterfly.

Mellouli is one of the best long distance swimmers in history, being the only swimmer to have won gold in both the World Championships and Olympics in both the pool and in open water races. Mellouli thrilled fans in Dubai in 2010, taking out the 1500m World Championship (25m) title, much to the delight of the vocal and enthusiastic Tunisian supporters, who will be delighted to see him compete again in Dubai.

“Both Le Clos and Mellouli are huge crowd favourites in Dubai, and both understand the impact meeting a sporting hero can have on young aspiring swimmers” said Ahmed Al Falasi, President of the UAE Swimming Association and Chairman of the Organising Committee.

“We are so pleased they have been able to fit these sessions into their busy schedules, as inspiring and motivating children to become involved in swimming is one of the major reasons we are bringing these international swimming competitions to Dubai” he added.

Dr Ahmed Al Sharif General Secretary of Dubai Sports Council, said “Since this magnificent venue was constructed we have been able to host numerous world class events. While it is fantastic that the Dubai sports fans regularly get to see the world’s best in action, the most pleasing legacy aspect is that we have seen a huge increase in participation levels in swimming and aquatic sports. We are sure that having the chance to meet such incredible swimmers as Le Clos and Mellouli will inspire our children to strive harder to reach their goals”.

Children who participate in the Children’s World Cup, which will be run on Thursday 17October from 7.30 – 8pm, and on Friday 18 October from 3-3.30pm, will be able to participate in a range of races including 25m freestyle, 25m backstroke, and 50m races in freestyle, breaststroke, backstroke and butterfly. Advance entries are required for the 50m races. Registration will take place at 5.30 on Thursday and 2pm on Friday.

The Dubai leg of the FINA Swimming World Cup has attracted a stellar line up, including multiple Olympic and World Champions and World record holders including Hungary’s Katinka Hosszu, (who also won the 2012 World Cup), Spain’s Mireia Belmonte Garcia, and Federica Pellegrini of Italy, as well as last year’s winner of the men’s competition Kenneth To of Australia, along with Le Clos and Mellouli.

The Dubai competition, which will take place on October 17-18, is the fourth leg of the eight-leg highly competitive World Cup series, which commenced in August in Eindhoven in the Netherlands, before moving on the Berlin. The Moscow leg will be held on October 12-13 before the Dubai event. The competition will then move to on to Doha, Singapore, and Tokyo, with the final event in Beijing on November 13-14.

The Swimming World Cup is contested in a 25m pool and sees both men and women vying for prize money in each of the 36 events. The event will see teams from over 30 countries including Australia, the USA and Poland competing for honours.

The FINA Swimming World Cup will begin at 10am on Thursday October 17 with heats in the morning at 10am, and finals being contested at 6pm, with the same schedule on Friday October 18. Tickets to the event will be available at the door at the Hamdan Sports Complex, which is located on Emirates Road (E611).

This release was provided to swimswam by FINA.