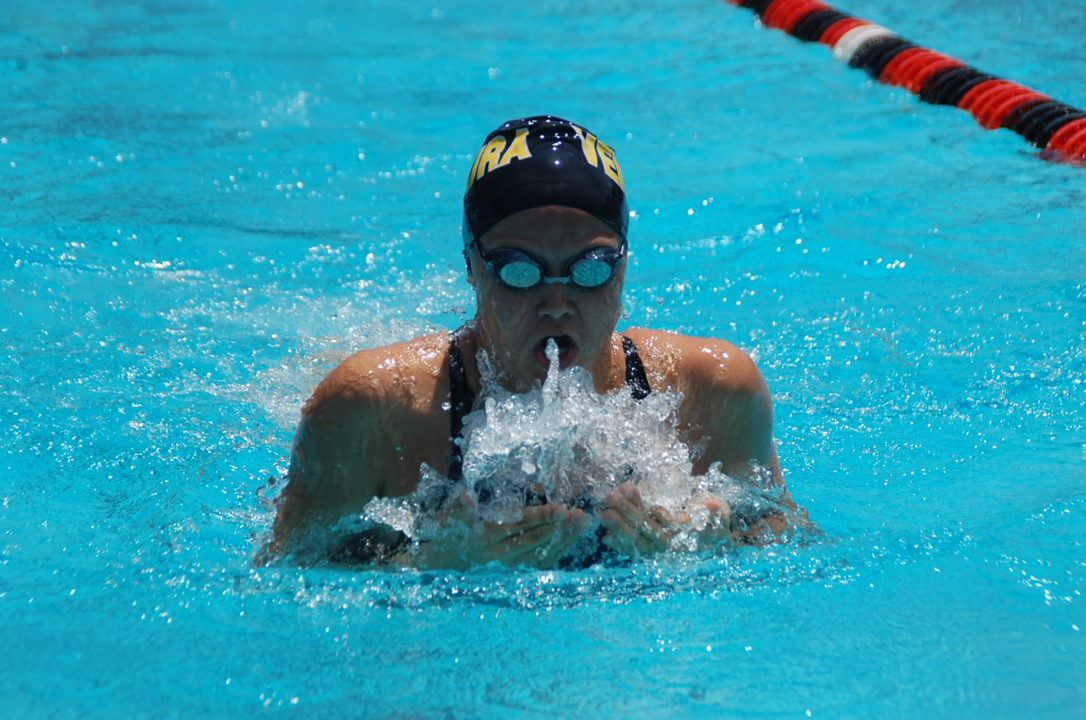 With Marina Garcia gone, Cal is looking for a new breaststroker in the 400 medley relay. Among the breaststroke specialists, Ali Harrison appears to be the early front runner. Archive photo via Anne Lepesant

The Cal women took a road trip for a dual meet against Pac-12 rival Utah this week. The bears were successful in dominating the meet, winning with 186 points to Utah’s 114. They had 3 swimmers pick up 2 individual wins: Amy Bilquist, Ali Harrison, and Noemie Thomas.

Freshman Harrison could be a key player for the Bears this season. Against Utah, she won both the 100 breast (1:03.98) and 200 breast (2:18.85). After graduating Marina Garcia, the Bears are in need of a new relay breaststroker. Though she’s one of a handful of women battling for the spot, Harrison appears to be the front runner of the breaststroke specialists at this point.

On the other hand, Kathleen Baker and Abbey Weitzeil are also possibilities if it comes down to it. Ideally, though, they’d take the back and free legs respectively. Both Weitzeil and Baker were absent from this meet.

Bilquist, an All-American freestyle/backstroker, battled closely with freshman teammate Robin Neumann in the 200 free. Neumann, who is swimming in her first ever yards season, held the lead up front, but Bilquist took over on the back half, winning in 1:50.54 to Neumann’s 1:50.98. She returned for another close race the 100 free, edging out Utah’s Dorien Butter for the win, 51.31 to 51.55.

The Golden Bears were coming off a two-day meet at Fresno State over the weekend and traveled with a smaller roster to allow some of the team members to recover physically and take care of some of their academic responsibilities. The lower numbers, though, didn’t affect Cal in the outcome.

“We had a little bit of a skeleton crew, and I thought we did a nice job overall,” head coach Teri McKeever said. “I thought the freshmen did well in their first dual meet, with several picking up event victories. We had different women stepping up at different times and gave a really good team effort. We’ll now get back to Berkeley to resume training after a few days of competition.”

Harrison earned wins in both the 100- and 200-yard breaststroke, while Bilquist swept the 100 and 200 freestyle, and Thomas took first in the 100 and 200 butterfly. In addition to Harrison, other freshmen who prevailed were Briana Thai on the 1-meter springboard, Sophie Krivokapic-Zhou in the 200 back and Sarah Darcel in the 200 IM.

Sophomore Maddie Murphy won the 50 free and Alexa Cacao triumphed on the 3-meter board to round out the individual victors. The foursome of Bilquist, Harrison, Thomas and Valerie Hullalso touched first in the opening 200 medley relay.

Cal next will send a contingent of five swimmers to the USA College Challenge Oct. 21-22 before the entire team returns to action for dual meets against Oregon State Nov. 3 and North Carolina State Nov. 4 in Berkeley.

SALT LAKE CITY – Utah women’s swimming and diving team received some strong performances from its newcomers but fell short to No. 2 Cal in the 2017-18 opener. The Utes were able to win four events, but were topped by the Golden Bears, 186-114.

“We had some good moments today, and I’m really proud of the freshmen,” head coach Joe Dykstra said. “They came into this meet with no fear and just went for it. They were aces.

Our upperclassmen, especially our seniors, are a little banged up, so we held them out. I thought that we raced hard. We made some mistakes with our turns and strategic aspects but we’ll clean that up before next Friday.”

In her first collegiate meet, Sara McClendon won the 1000 free touching in at 10:13.16, with classmate Mandy Gebhartfollowing in second with a time of 10:23.22. McClendon also captured the 500 free with a time of 5:00.36, tallying wins in two different events.

Another freshman, Emma Broome was able to get a victory for the Utes in the 100 back, finishing with a time of 56.36.

Utah closed the meet with a win in the 400 free relay. Broome and transfer Ianire Casarin teamed with returnees Dorien Butter and Gillian St. John to capture the event with a time of 3:28.08.

The Utes will be back in action next Friday, Oct. 20th, against No. 1 Stanford. The meet will be held at the Utah Natatorium and is set to start at 2 p.m.