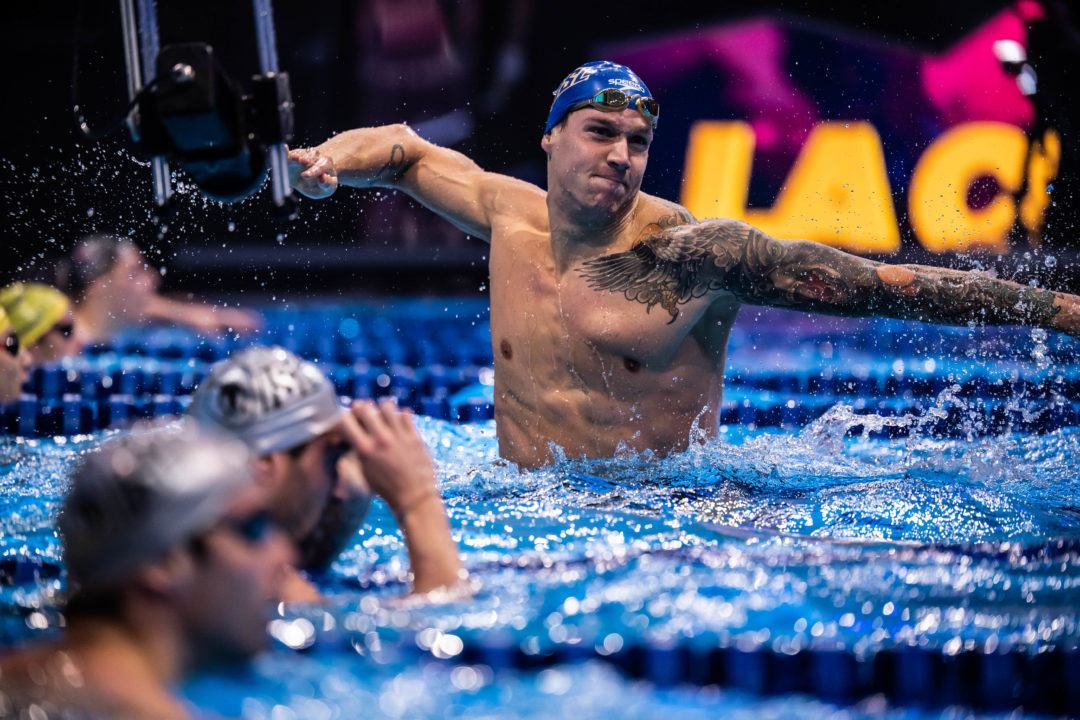 Dressel blasted his way to a time of 49.88, taking almost four-tenths out of Vladimir Morozov's world record of 50.26. Current photo via Mike Lewis/Ola Vista Photography

About 30 minutes after setting a new American Record in the 100 freestyle, Caeleb Dressel recorded the fastest swim in history in the 100 individual medley.

Dressel destroyed the field en route to a final time of 49.88, becoming the first swimmer to eclipse the elusive 50-second barrier. The previous world record sat at 50.26, done by Russian Vladimir Morozov twice in 2018.

Less than a week ago, Dressel set the American Record in the event in a time of 50.48, which erased the 2012 mark of 50.71 held by his Florida training partner Ryan Lochte.

Prior to this swim, Morozov held the seven fastest performances in history, all coming between 50.26 and 50.36. He still owns eight out of the top-10, with Dressel now owning #1 and #9.

Compared to his swim from six days ago, Dressel was out a bit quicker in 22.79, but made up most of his ground on the closing 50.

Compared to Morozov’s old world record (the first time he broke it), Dressel was better by around two-tenths on both 50s.

Dressel’s Cali teammate Marcin Cieslak was the runner-up in the event, clocking 51.14 for a new Polish Record, giving the Condors all 37 points in the event as Dressel jackpotted the rest of the field. Cieslak set the previous record of 51.36 back in Match 10.

My friend texted me 49.88 because he was watching the live stream while I was reading on the live recap. I thought he was joking and said “bruh, in your dreams”. This isn’t just a crazy time, for 100 meters this is almost Biedermann levels of fast.

He won by more than a second in a 100m event. Even without a world record, that’s still very impressive. But being the first ever under 50 seconds is basically an extra 2 layers of icing on the cake.

Bro why is your frame of reference Biedermann?

bc he was very fast?

Dressel is the man.
The end.

I assume the full taper will be ready for next saturday. Wonder what kind of nonsense we’re about to see

He could go for the 100 Free world record, but might hold back a little since he has 2 more events right after (100 IM & 50 Fly where he could also win/Jackpott/ set world records, esp. since I think the Top 2 in the men’s 50 Fly will not be in the final)

No, he’s going all out, he will go for the record for sure