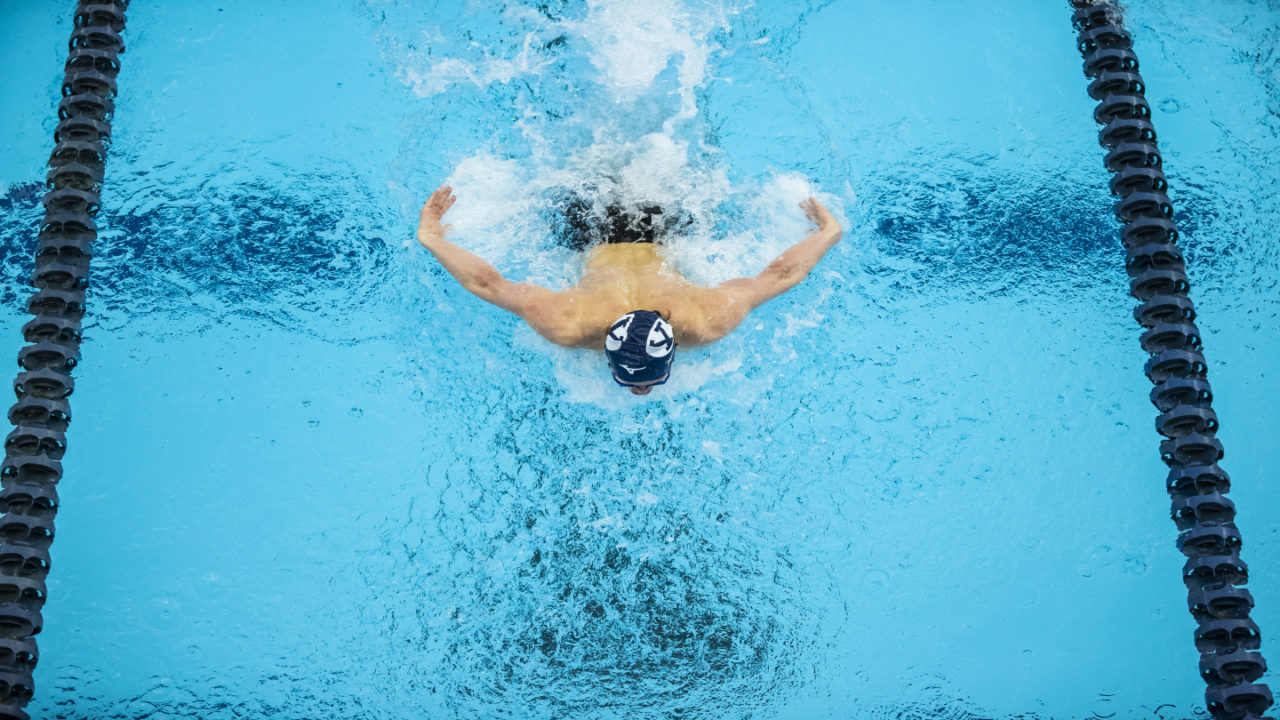 After day 1 of the MPSF Championships, BYU has a narrow 4 point lead on the men's side. Hawaii and BYU's women's programs are tied for 1st with 74 points. Archive photo via BYU Athletics

BYU’s relay snagged 2nd place just .14 after the ‘Bows. Brynn Sproul led-off BYU’s relay, touching the wall .05 ahead of Hawaii’s Hajkova. The two teams were neck-and-neck through the halfway point until Lassman pulled away on the fly leg. It came down to the touch as BYU’s anchor Gwen Gustafson brought home the relay in 22.11 compared to Friedrich’s split of 22.59.

There was one disqualification in the event, from the University of the Pacific.

BYU went on to claim victory in the men’s 200 medley relay, a significant improvement from their 4th place finish at last year’s MPSF Championships. Their relay of Payton Plumb, Josue Dominguez, Javier Nicolas, and Connor Stirling touched the wall about 1.5 seconds ahead of UC Santa Barbara with a time of 1:26.83.

It was a tight race for 2nd place with UC Santa Barbara, Cal Poly, and Hawaii all touching the wall within .20 of each other in that order. Cal Poly surpassed last year’s champion, Hawaii by .09, greatly improving from their 6th place finish last season.

BYU’s 800 free relay of Katie McBratney, Gustafson, Chloe Freeman, and Sproul touched the wall 1st with a time of 7:22.29, about 2 seconds ahead of Hawaii. Their fastest leg was surprisingly the lead-off 200 split swam by McBratney in 1:48.63.

In 2nd place, Hawaii’s relay splits were the inverse of BYU’s. Friedreich’s anchor leg was the fastest 200 split of the relay, as she touched the wall with a time of 1:48.25. Defending champions UCSB finished in 3rd place with a time of 7:25.41.

Hawaii ended day 1 of the MPSF Championships in the same way they started it, with a win. The ‘Bows relay of John Clark, Ian Venter, Timothy Gallagher, and Talon Lindquist touched the wall at 6:28.98, half a second ahead of BYU.

Interestingly, BYU’s 3rd 200 split, swam by junior Tama Tuitama, was the fastest split in the field (1:36.26). The Gauchos had also won the men’s 800 free relay at last season’s MPSF Championships, and they finished in 3rd place on Wednesday with a time of 6:31.04.

On Tuesday, the University of Hawaii snagged 2 victories, one from sophomore Daphne Wils on women’s three-meter (338.25 points) and one from Mason Williams on the men’s one-meter  (316.50). BYU mirrored them, posting two 2nd place finishes from Morgan Paul on women’s three-meter (290.10 points) and Mickey Strauss on men’s one-meter (309.40 points).

Hawaii’s Max Burman claimed victory on men’s three-meter on Wednesday with 418.10 points, edging out Strauss by less than 1.5 points. On the women’s side, Wils took 1st place on one-meter with 315.90 points and a 45 point lead over second-place finisher Adia London from BYU. The first diver to crack the top three who was not from Hawaii or BYU was UC Davis’ Taylor Hornberger in 3rd place on women’s one-meter with 266.10 points.