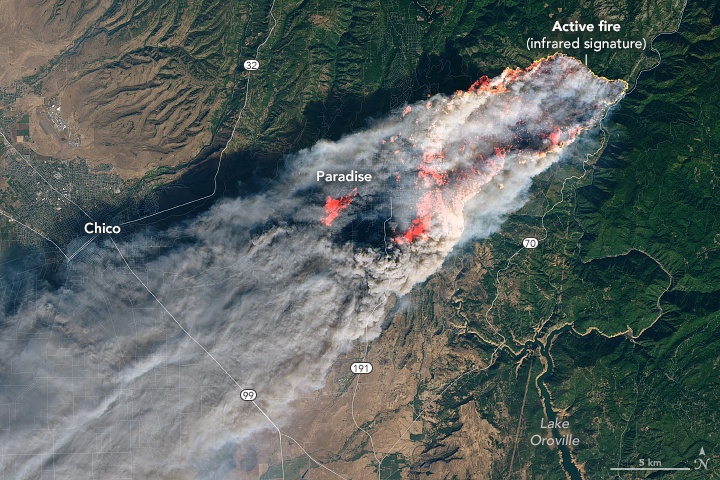 Update: the meet has been cancelled due to air quality issues caused by local fires. Current photo via NASA

Update: Tonight’s meet has been cancelled, according to a tweet from the Texas Women’s Twitter account.  As of right now, they are still scheduled to swim Cal at 2pm tomorrow.

A scheduled swim meet on Friday between the Texas women and the Stanford women has been pushed back from 4PM Pacific Time to 6PM Pacific Time because of air quality issues in the area.

Multiple massive wildfires have broken out this week in California, with the ‘Camp Fire’ in nearby Butte County fire being the one impacting the meet. As of Friday afternoon, the fire has destroyed an estimated 2,000 structures and killed 5 people who became stuck in their vehicles in the city of Paradise. “Pretty much the community of Paradise, is destroyed” according to Cal Fire Captain Scott McLean.

As of Friday morning, the fire had burned about 70,000 acres and was 5% contained.

WeatherBug ranks Stanford’s current air quality as 75 on its scale of 100 (higher numbers are worse), which is “low.” WeatherUnderground ranks the air quality as ‘Unhealthy’ and measures a high level of the fine particulate matter known as PM2.5. PM2. are tiny particles that irritate respiratory systems and over the long-term aggravate heart and lung disease.

Texas is scheduled to swim Cal on Saturday, which will also be outdoors. Berkeley is having similar air quality issues as Stanford is.

Stanford are the two-time defending NCAA Champions, and Stanford and Texas are ranked #1 and #3, respectively, in the latest SwimSwam Power Rankings.

Vote Up50Vote Down Reply
A. Pearson

When is USA Swimming and NCAA going to adopt AQI standards?! CIF and NCS (California high school sports governing bodies) have adopted a mandatory cancellation policy when AQI levels are at 151. We need to protect our athletes from “subjective measurements” and implement real time measurements and standards for all.

Do they not have an indoor pool?