Buffalo Wins Record 12th Meet In a Row Against Duquesne 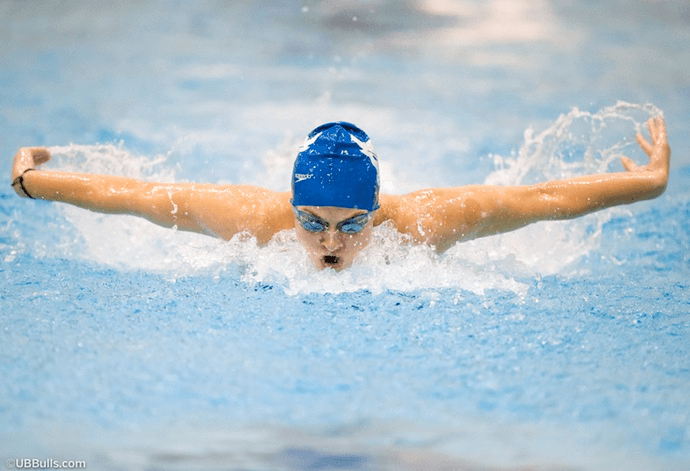 Buffalo set a program record over the weekend, winning its 12th meet in a row. The team is now 7-0 in the series against Duquesne. Archive photo via Buffalo Athletics

THE POOL
In thrilling fashion, the Bulls finished first and second in the 200 medley relay to start the day. Mia Naccarella, Katie Pollock, Clarice Fisher, Jillian Lawton won in 1:43.78. Finishing in second-place in a time of 1:47.04 was Maddy McDonough, Kasey Keaney, Amanda Neeb and Sawyer Bosley.

Pollock and Keaney would give the one-two punch again in the 100 breaststroke. Pollock won the event in 1:03.91 with Keaney finishing in second in 1:06.60

To close out the day, Bosley, M. Naccarella, Alicia Wood and Lawton won the 200 freestyle relay. Finishing in third was the team of Grace Wood, Abbey Malmstrom, Jaidyn Wolfe and Neeb (1:40.26).

THE DIVING WELL
The Bulls once again dominated the diving well sweeping the podium in both the 1 and 3-meter dives. In the 3-meter dive, freshman Marialis Kwak won with a score of 324.00, which is now fifth in program history. Victoria Franz claimed second with an outstanding performance with 307.13 points. Patricia Arceri finished third with 262.58 points as freshman Kaylee Donovan scored 216.60 for fifth.

BUFFALO, N.Y. – The Duquesne swimming and diving team began the 2022 portion of its schedule on Saturday afternoon with a dual meet at Buffalo, where the Bulls claimed a 169-129 victory over the Dukes at the Alumni Arena Natatorium.

Emma Menzer and Orla Egan each posted a pair of first-place finishes to lead Duquesne on the day.

NEXT UP
Duquesne hosts Marshall for senior day next Saturday, Jan. 15 at 12 p.m. at Towers Pool.