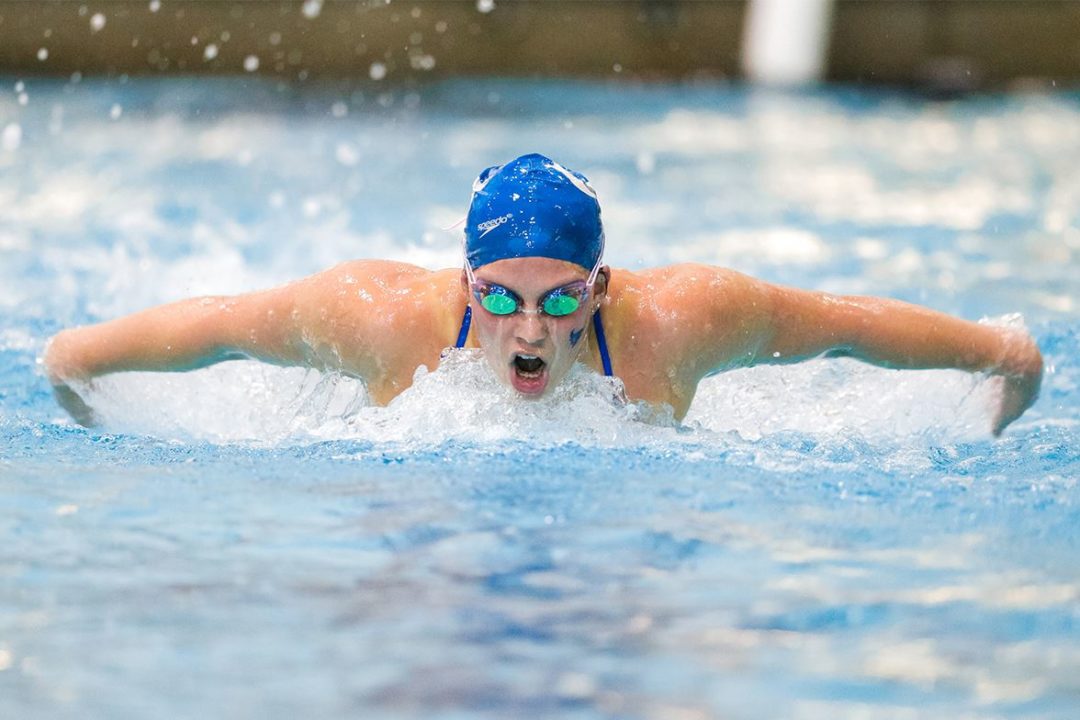 The University at Buffalo swimming and diving team captured their first win of the season Saturday afternoon in a 197-103 win over Ball State. Current photo via Buffalo Athletics

BUFFALO, NY – The University at Buffalo swimming and diving team captured their first win of the season Saturday afternoon in a 197-103 win over Ball State.

The Bulls were hot out of the gate to start the day as they claimed second and third place in the 400 medley relay. Finishing in second in 3:51.85 was Andrea Ernst, Grace Baumer, Brittney Beetcher and Katelyn Burns. Nicole Roitenberg, Katie Pollock, Clarice Fisher and Jenna Krull claimed third place in 3:52.13. Pollock and Baumer would continue their success in the 100 backstroke as they would finish second and third.

The Bulls continued their dominance as they finished first and second in the 1000 freestyle. Julia Boswell (10:31.59) claimed first place while Lena Li (10:35.86) claimed second place.

Junior swimmer Nicole Roitenberg would share her veteran experience with freshman Clarice Fisher in the 200 butterfly, as they finished first and second.

In diving, the Bulls swept the 3-meter event with freshman Victoria Franz leading the charge with a score of 318.90. Journi Northorp (263.18) and Patricia Arceri (257.78) finished right behind Franz. Franz wasn’t done, as she finished in first place in the 1-meter dive with a score of 277.35.

“The improvements we’ve been focusing on are the little things,” said Head Coach Andy Bashor. “The starts, turns, working on unders and that stuff. So, from that perspective, we are starting to see visual progress. Overall I felt like we handled another week of really good training and coming in here against a good Ball State team, being able to come in and race and see really good racing and splitting we are doing, I’m really happy with that.”

The Bulls will travel to Oxford, Ohio as they will face off against Miami University of Ohio. The meet is set to start at 11 a.m. at the Corwin M. Nixon Aquatic Center.

BUFFALO, N.Y. – The Ball State University women’s swimming and diving team got an early win in the 400 Medley Relay and competed to the very end before ultimately falling to Buffalo, 197-103, Saturday afternoon.

It was the second meet for the Cardinals in two days as Ball State defeated Youngstown State Friday night.

“Our Cardinals showed a lot of toughness today,” said head coach J. Agnew. “We knew Buffalo would be a difficult challenge, but the women came ready to compete.  I think we surprised both Buffalo and ourselves with our fast start in the 400 Medley Relay. Overall, I think our team will have more confidence moving forward from this meet that we can compete with anyone in the MAC.”

“Alex is establishing herself as one of the top threats in the breaststroke events,” said Agnew. “After battling through an early season shoulder injury, she has found her stride and never looked better.”

Rachel Bertram led Ball State in diving with a second-place score of 244.28 on the 1M. Caitlin Locante earned third on the same board by registering a score of 244.28.

“We struggled out of the gate today on 3M, but the ladies were able to rebound a bit on 1M to leave on a positive note,” said diving coach Nick Gayes. “The main thing for us was to familiarize ourselves with the environment, since that’s where the MAC Championship will be, so we can return confidently in February.”

Ball State returns to action Friday, November 1, at Eastern Illinois. The Cardinals then open their home slate the next day against Eastern Michigan and Wabash.