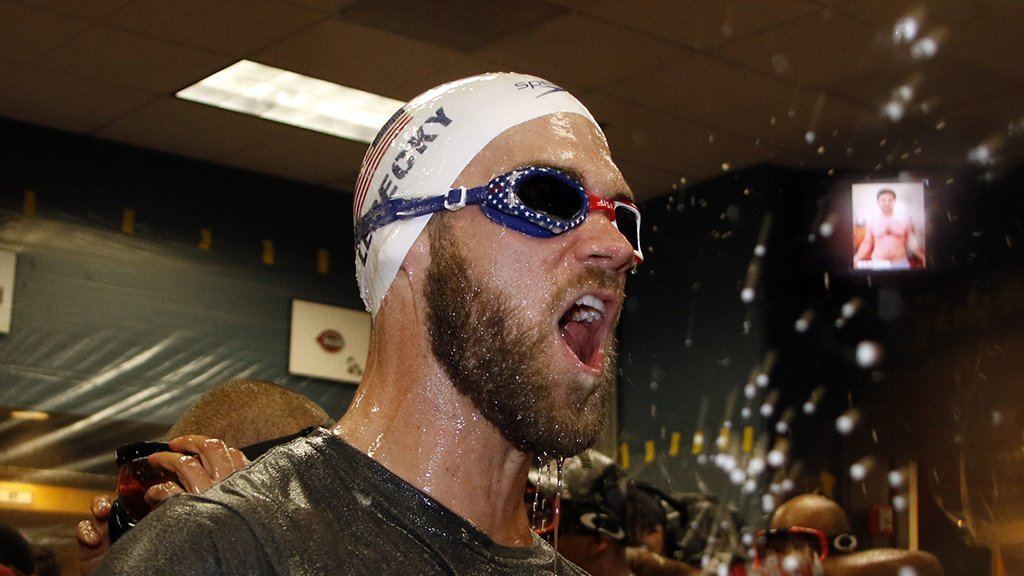 When native Washingtonian Katie Ledecky threw out a first pitch at a Washington Nationals major league baseball game last month, she had an amusing moment with the reigning National League MVP – she took off her Olympic medals and had Bryce Harper hold them one at a time.

Bryce Harper is one of the top 2-3 baseball players on the planet, and is projected to one day become the wealthiest player on the planet. It’s not often that Harper is conscripted into “hold this for me” duty, especially not while the person passing off is about to play baseball.

But that’s what happened, and Harper was apparently in so much awe of Ledecky and her feats, that he wore a Katie Lededcky swim cap during the team’s clubhouse celebration on Saturday. The Nationals clinched the NL East Division, and a spot in the playoffs, with a 6-1 win over the Pirates on Saturday, and below is the pandemonium that ensued:

Clubhouse celebrations have  become almost a game of one-upsmanship, with players expressing their creativity in a pragmatic effort to protect their eyes from any potential freak accidents from free-flowing champagne or flying corks.

Harper chose to honor a fellow D.C. local in his celebration, further building Ledecky into that rare class of swimmer who transcends the water in their greatness.

On Saturday evening, Ledecky was awarded the USA Swimming Athlete of the Year honor for a record-setting fourth consecutive year.

I saw the celebration and loved how Bryce wore the cap.

Bryce’s fiancée should be nervous. 🙂

eh, not sure about Harper being “the best active baseball player” as the picture caption says..his performance this season suggests otherwise

Josh Donaldson is current reigning MVP for AL. No one who has a clue about baseball would argue Harper is better than Trout. Compare stats and its not close

Agreed. Show us that 2015 season wasn’t a fluke and I’ll start believing Harper is somewhere close to Trout. His 1.8 WAR this season certainly suggest otherwise.

I love how swimming is getting more and more recognition. We gotta thank Phelps and Ledecky for that!

I saw that cap in a picture yesterday and thought maybe my eyes were playing tricks. I’m so thrilled to read the caption which describes Ledecky as the “greatest active swimmer on earth”. Although statements like this are always only opinions, it is one I agree with. So much better a descriptor than “GOAT” which changes every decade. On top of her ability, she seems like such a level headed, mature, happy and well-adjusted person. I really don’t know her other than what I see on TV and read about her, but right now she is my “Swimming Hero”. GO KATIE !!!