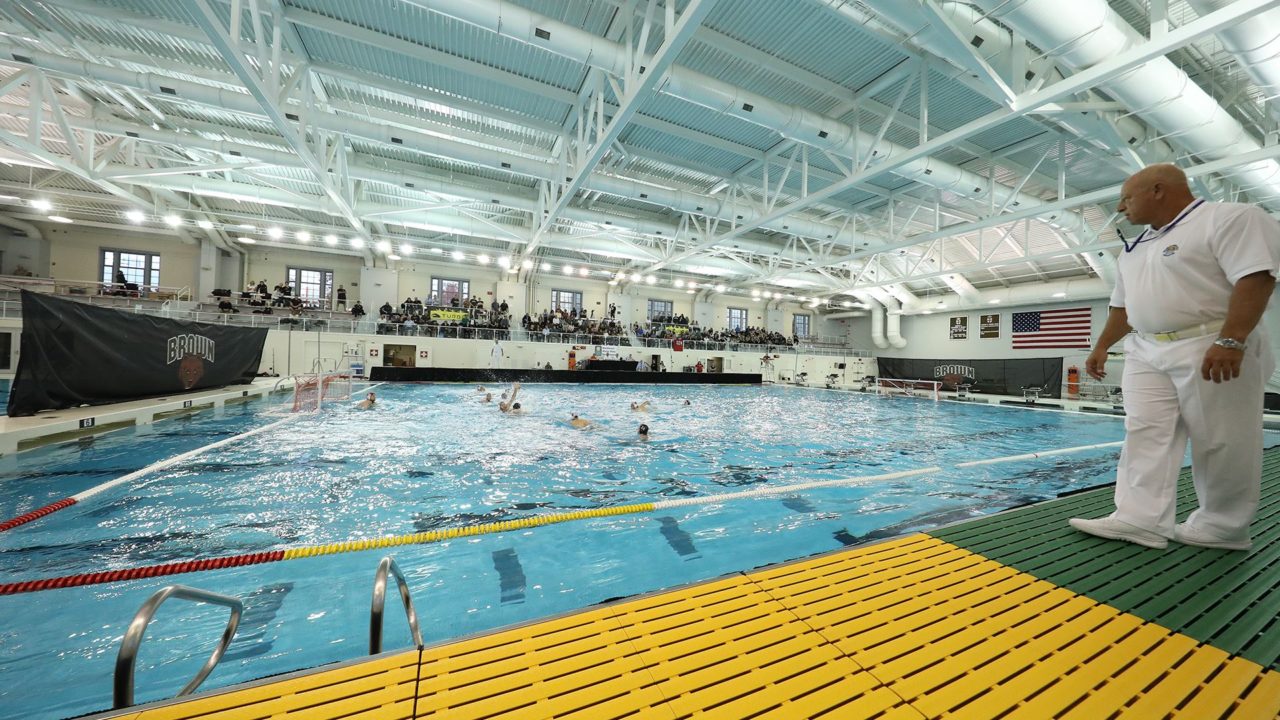 Brown University, whose pool is shown above, reinstated to varsity men's track & field and cross country, 12 days after demoting them to club status. Current photo via Brown Athletics

Brown University president Christina Paxson announced on Tuesday night that men’s track and field and cross country, which had been among the eleven varsity sports demoted to club status on May 28, would remain at the varsity level for 2020-21. The eight other teams (men’s and women’s fencing, men’s and women’s golf, men’s and women’s squash, women’s skiing, and women’s equestrian) will continue as club sports next fall.

Paxson had announced the demotion of the 11 teams as part of the “Excellence in Brown Athletics Initiative” which would allow the university to focus on excellence in a smaller number of varsity sports. The initiative would also promote “gender equity and diversity” by moving women’s sailing and coed sailing to the varsity level. What Brown failed to observe, according to Outsports.com, is that “the men’s track and field team is the second-most racially diverse club on campus, behind the football team. It has more Black athletes, 11, than the lacrosse, baseball, hockey and crew teams combined.”

Immediately after the announcement of May 28, members from each of the demoted teams began to organize. Less than two weeks later, the track, field, and cross-country athletes had gathered nearly 50,000 signatures on a petition to reinstate the teams. Runner’s World reported that “Former members of the Brown women’s track and field team jumped to the program’s defense in an op-ed for the Brown Daily Herald on June 8. And Russell Dinkins, a Princeton alum, responded with an essay titled, ‘Brown University, If You Were Actually Serious About Racial Injustice You Would Not Be Cutting the Men’s Track Team.’”

12 days after cutting the programs, President Paxson wrote about her reversal, “Our students, alumni and parents took the time to share their deeply personal stories of the transformative impact that participation in track, field and cross country has had on their lives. Many noted that, through Brown’s history, these sports have been a point of entry to higher education for academically talented students who otherwise would not have had the opportunity, many of them students of color. In addition, we heard from members of the women’s track, field and cross country teams who made a compelling case that eliminating the men’s program would adversely impact the women’s program.”

Meanwhile, the COVID-19 crisis has led to the elimination of 147 total programs* so far this spring:

A number of smaller colleges have shut down altogether, affecting 60 programs*:

2080 rostered athletes* have been affected by the program cuts, including 1270 men and 810 women. (The table below does not include incoming NLI signers.)

* Thank you to Jason Bryant for providing SwimSwam with all the figures. Bryant writes about wrestling at Bryant Wrestling and Mat Talk Online. He hosts the podcast Mat Talk and publishes daily newsletters. According to his Twitter profile, he is a “Hall of Fame Sportswriter, Broadcaster & NCAA/Olympic PA Announcer. Podcaster. Historian. Archivist. Wrestling nerd. VA Native.” Bryant has been the public-address announcer for wrestling at NCAA Division I Championships, Olympic Games, and World Championships.

SO glad to know this – I love track and field. These athletes are the real deal….especially the LADY Shot-putters.

It’s surprising Brown cut track and field without thinking through the diversity issues. This is a school trying hard to address diversity and inclusion and come to terms with its founders slave trading past. Great job by the track & field and running community on challenging Brown and getting the sport reinstated.

If you’ve been to Brown you realize how diverse the school really is. Cutting men’s track & field and cross country was a stupid decision and should never have been made. Glad there was enough support to get the school to reconsider. Everyone deserves a mulligan…