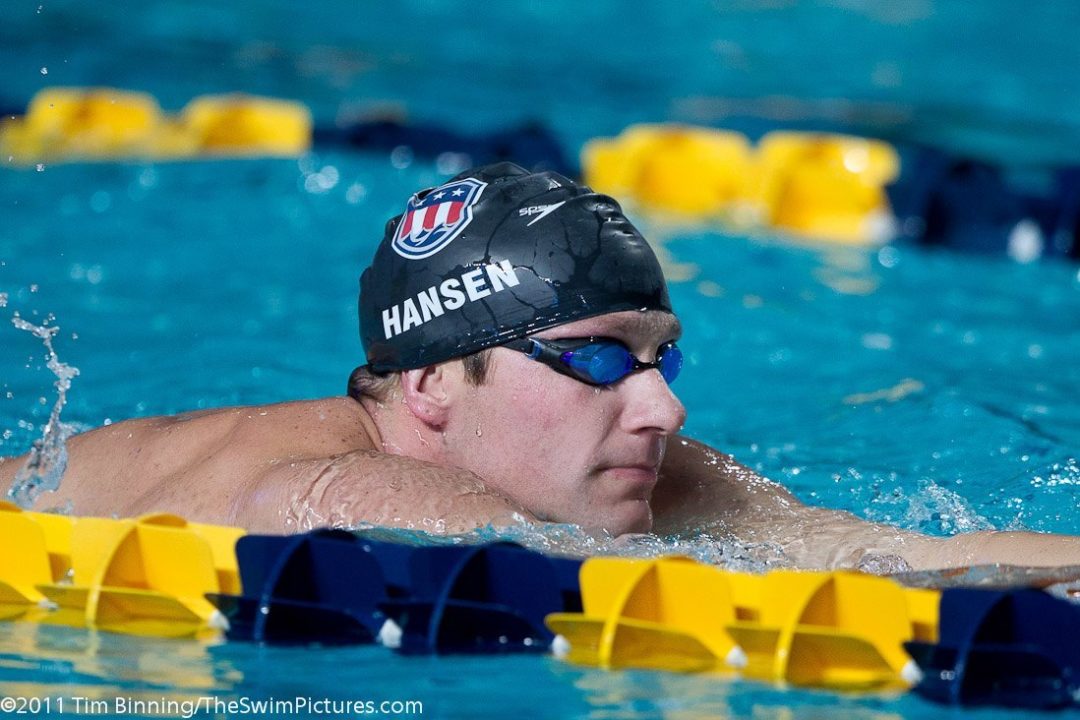 American breaststroking star Brendan Hansen has finally spoken publicly about the controversy after Cameron van der Burgh won the gold medal in the 100 breaststroke at the Olympics and broke the World Record with what proved to be, afterward, multiple illegal dolphin kicks on his underwater pullout.

In statements made to the Austin American Statesman over the weekend, Hansen said of van der Burgh’s public admission of breaking the rules that “”I’m proud of him for (at least) being honest.”

“He did it to call out FINA to say, ‘I’m getting away with this, and you guys aren’t going to do anything about it,’ ” the quote continued. “Amongst the breaststrokers, it was a big joke. Everybody was just like, how much can I get away with? The rules need to be changed, and FINA needs to realize they need to step it up and bring in video surveillance.”

Hansen’s point is hitting the nail on the head. Despite calls from around the swimming community for van der Burgh’s gold medal to be taken away, that still would not fix the problem: breaststroke would still be a harbor for gaining an advantage by violating the rules, the swimmers would simply no longer speak to the media for fear of losing gold medals.

“They’ve turned their heads the other way,” Hansen said, “and that’s why Cameron was like, ‘You know what? I’m going to call you guys out.’ ”

There was no mechanism by which FINA could have used post-race footage or admissions to take away a medal; any attempt to do so would have been challenged to the international Court of Arbitration for Sport (CAS) and simply overturned. Despite comparisons to doping the situations are not the same: stroke infractions never have been, nor are they currently, classed in the same way in the rule books as performance enhancing drugs. Having the IOC take away gold medals posthumously for doping violations is not a precedent for doing so after stroke violations. One is specifically allowed for in the rule books, the other is not even alluded to.

For FINA to take away a medal for a violation seen on video after a race, under the current rules, would in itself be a violation of the rules, and thus no more excusable than the initial action.

If anybody is going to start taking away medals for stroke infractions after races, then it needs to be done fairly and equitably. Every swimmer needs to face the same scrutiny. If athletes begin to have medals and awards taken away after-the-fact for admitting to breaking rules (imagine if an NBA player admitted to stepping out of bounds after a game, when no call was made), then it would amount to as much as censorship.

Swimming always has been, and always will be, a very black-and-white sport. Swimmer A was faster than swimmer B or he wasn’t. Something is either a rules violation or it isn’t. That’s the way we like it. Whenever it’s not that way (see butterfly), we change the rules to make it so. But nearly every other sport in the world, aside from perhaps track & field, has shades of gray, and that’s where breaststroke currently sits. We can either let it stay there, or we can come up with a way to ensure enforcement of the rules.

But whatever that enforcement is need be done across-the-board, with the input of the athletes (perhaps a novel concept for the powers that be), and with understanding of the rules by all.

All swimmer and swimfans around the world would probably thumbs up for using of video footage, and it can be done in most important meetings withouth a huge cost rise probably (National Meets and International, can´t see a reason for using them on college, state meetings)

But will FINA listen to what all people are asking for of keep on acting as deaf ears and their usual corruption? They don´t have a story of admitting things were wrong at a time..

So the last three Olympic 100 breast Champions have now cheated and been seen on underwater cameras doing it. FINA has done nothing. Oh, sorry, they changed the rules rather than disqualify Kitajima twice. Perhaps van der Burgh calling them out and “daring” them will get them to adopt underwater cameras. But I’m not holding my breath.

Vote Up00Vote Down Reply
Will

If you can be stripped of your medal retroactively because of doping, cheating with illegal kicks should be no different.

Will – you can advocate that the rule should be added, but there is no such rule in the current book. To take away the medals would be just as much “cheating” (if every rules violation is “cheating”) as taking illegal dolphin kicks, because it would be a violation of the rules.