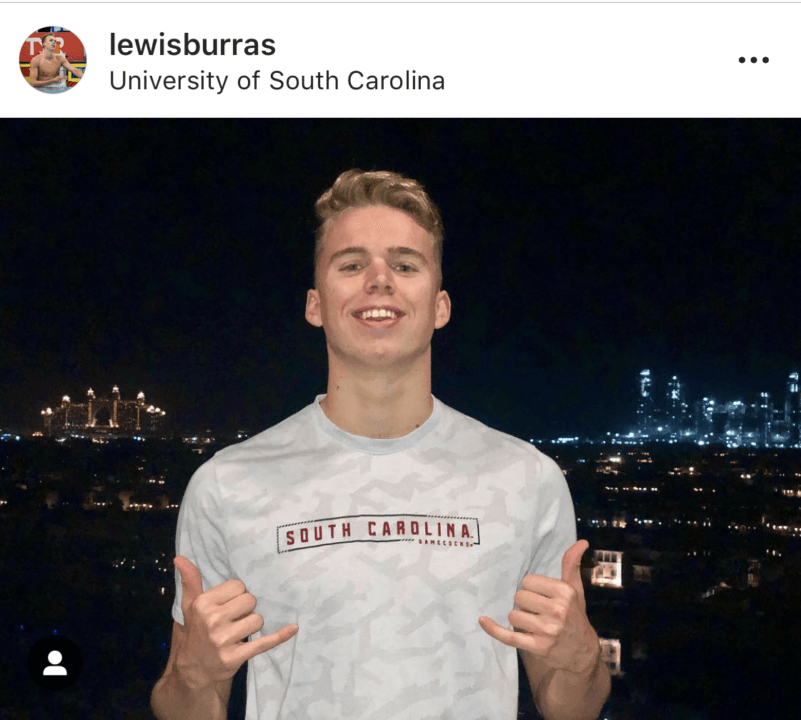 Lewis Burras announced today will be transferring to the University of South Carolina after competing for UVA earlier this season. Current photo via Lewis Burras

Will Myhre will join the Wisconsin Badgers as one of their top breaststrokers in the fall of 2021. He will have three years of remaining NCAA eligibility.

British sprinter Lewis Burras, who swam for UVA in the fall, but departed the school mid-season, announced today that he will be transferring to the University of South Carolina and start competing with the Gamecocks in the fall of 2019.

“I’m super excited about this move and really feel like I’ve found not only the right university but a swim team I can call family” Burras told SwimSwam today.

It might be a little strong to say that Burras will be a game changer for South Carolina, but he definitely projects to make an immediate impact. He didn’t swim at at the UGA Invite which served as UVA’s fall taper meet, so we didn’t get a chance to see him at his peak. Yet, his times of 20.40 and 44.70 would’ve ranked top ten in the SEC during the months of September and October. With a taper and a tech suit, it’s reasonable to assume that Burras is at least capable of breaking 20.0 and 44.0, and should score at the SEC Championships.

The Gamecocks have been more of a distance-oriented team as of late, and didn’t have any men score in the sprint freestyles at last year’s SEC Championships. They came close, with AJ Ross placing 26th in the 50 free prelims with a 20.10 and Patrick McCrillis finishing 36th in the 100 free with a time of 44.69.

Got scared of racing against real sprinters in the ACC

Probably why he chose UVA the first time around. He felt at ease around a group of like minded people.

Has to be a lot more going on to this story. UVA is vastly superior to South Carolina as s spring swim program and a school

Scar now has 3 intl under 23.0 lcm coming in next fall. Looks like they’re switching gears for some much needed relay points.
Great addition and definitely a core to build from.

Also pretty good in the winter too

I think you answered your own question. If swimming wasn’t the problem it has to be the school. My guess is the academic rigor at SC is not the same as it is at VA.

True, as swimming and school are the only two things that a collegiate swimmer has affecting their lives

Sounds like sarcasm… but it really is. Or at least 90% of their lives while they are enrolled.

This was quick decision. That other article about him leaving UVA was less than 3 weeks ago. Is it possible for you to speak to a different school before leaving ?

As long as you inform the coach your request to transfer.