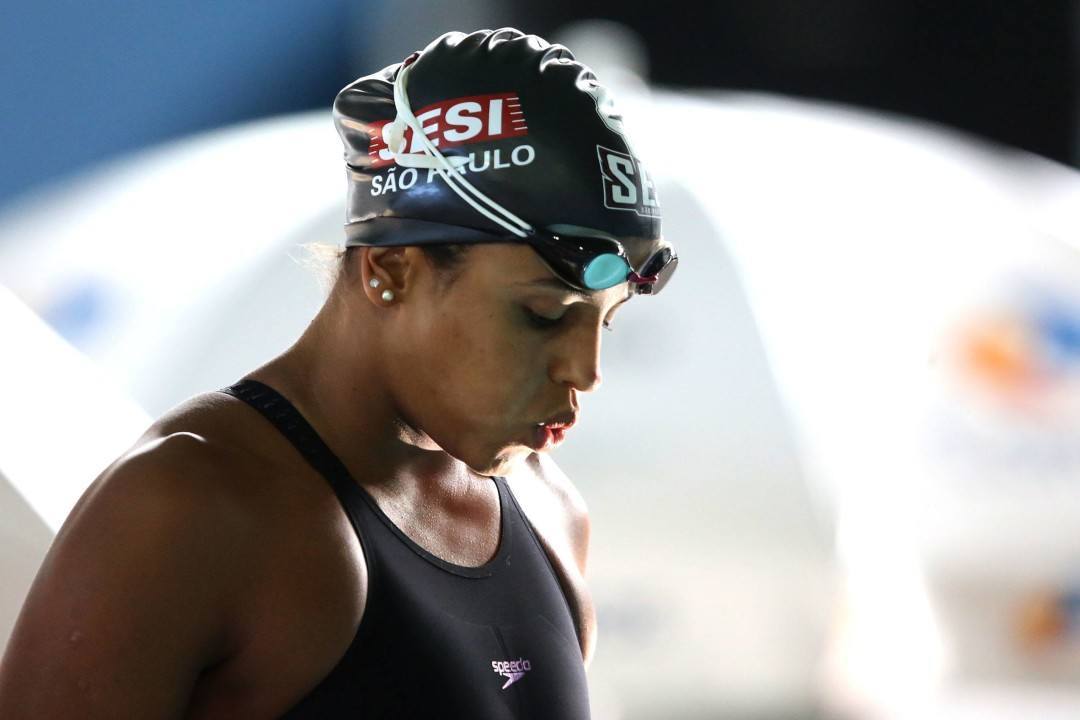 The Brazilian Swimming Federation (CBDA) and the Brazilian Anti-Doping Agency (ABCD) made clear in statements yesterday that Medeiros was not the victim of some clerical issues. Archive photo via Satiro Sodré/ SSPress/CBDA

On June 15th, news broke that Brazilian swimming star Etiene Medeiros had tested positive for fenoterol, a drug used to help treat asthma. This came after she pulled out of the Mare Nostrum tour, where she was seeded to win a lot of prize money.

Medeiros’ case took a turn yesterday, as a paperwork error was cited to be the culprit for her alleged wrongdoing. Athletes can prove that they need to use a banned substance if it is part of necessary medication for a condition they have (like asthma), but Medeiros had yet to do the paperwork for a Therapeutic Use Exemption (TUE). In short, it looked as though Medeiros could have been innocent, and that she had overlooked some required documentation of her situation.

The Brazilian Swimming Federation (CBDA) and the Brazilian Anti-Doping Agency (ABCD) made clear in statements yesterday that Medeiros was not the victim of some clerical issues.

According to the ABCD, Medeiros conducted an out-of-competition urine test on May 8th in Sao Paulo at a WADA-accredited laboratory, where fenoterol was detected. The ABCD looked for Medeiros’ TUE, which would clear her name, but found nothing of the sort. They notified her that her A sample had come up with a positive test result on June 2nd, two days before the start of the Mare Nostrum tour in Monaco.

On June 3rd, just one day before the start of the Mare Nostrum tour, Medeiros began serving a voluntary suspension while she requested for a B sample of her urine to be tested. The same lab that tested her first sample, LBCD, confirmed their initial results with her B sample on June 14th. They considered this result set as a positive test for a banned substance with no TUE to prove her innocence.

On June 15th, the ABCD went to the CBDA, Brazil’s swimming federation, and handed over their findings. In the CBDA’s statement yesterday, they declared her guilty for using fenoterol. Her case will go to the Superior Court of Sports Justice of the CBDA, where it will be disputed.

If Medeiros receives a suspension, she could miss out on swimming at home for the Rio Olympic Games. The national record holder in the 50 free, 50 back and 100 back, Medeiros is (or was) part of a rising elite group of female swimmers in Brazil.

I’m a Masters swimmer on asthma medication, and even I was advised to take a TUE form with me to Kazan last year… Surely someone at that level doesn’t make mistakes like that?

If she knew she was taking the (required) medication for asthma for some time now.. and if she has had filed a TUE before, and whenever needed… then she knew the drug would appear on a doping test.. then, why ask for the B sample to be tested? Can’t figure out the logic on this….

I never understand how the people with the weakest set of breathing apparatus given out to man & are basic propped up by medication /devices get to be the fastest , strongest amongst us .

I think those fish that crawled out onto the shore were the ones with the best , biggest & adaptive set of lungs ..it’s pretty tiring exiting the waves & these guys – were good. Asthmatics are basically evolutionary failures. Yet here they are olympic champs .

So there are American experts in evolution ? Who knew?

One of the most promising young swimmers too…unfortunate.

uh.. at 25 she’s absolutely not young, especially for a female swimmer.

Now i Don´t know if TUE need to be redone from time to time.. and to compare with previous TUE.. Seems like she has been issuing TUE for a few years already.

Also I don´t know if this medicine is new in market or was one she already used in the past. But she also had 4 WADA test and all were negative.. But the lack of information about past issued TUE and such is difficult to analyze the situation completely.

Also, on CBDA statement they added the following:

CBDA still awaits the Court judgment, but they trust she will be on the olympics.