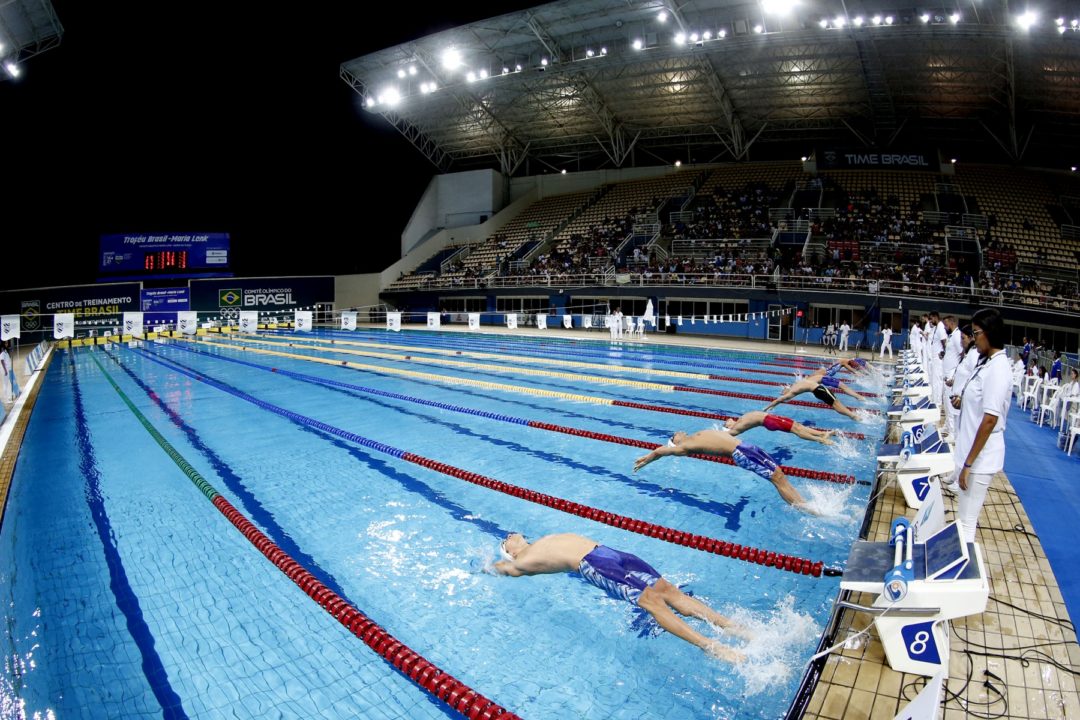 In spite of the CBDA trying to downplay the severity of the coronavirus outbreak, the Brazilian Olympic Committee has pulled spectators from April's Olympic Trials. Stock photo via Satiro Sodré/SSPress/CBDA

The Brazilian Olympic Committee (COB) has announced that the country’s upcoming Olympic Swimming Trials will still be held, albeit without spectators. The event, formerly known as the Maria Lenk Trophy, is scheduled to be held between April 20th and 25th at the Maria Lenk aquatic center in Rio de Janeiro.

The COB has cancelled several other non-sporting events in the wake of the global coronavirus pandemic, including no longer sending officials for its official Tokyo event inspection and cancelling the “100 days to Tokyo” festival scheduled for Brasilia in mid-April.

The news comes in spite of the Brazilian aquatics sports federation (CBDA) posting a more defiant message on its website on Thursday that it would only make adjustments to its programming when mandated to do so by government bodies.

“All competitions will continue; however, with each update, we will issue newsletters and notes, aiming to safeguard the health of the aquatic community. We will only take extreme measures as directed by the control bodies.”

The CBDA also posted a statement by Dr. Rodrigo Brochetto, the doctor of the Brazilian national team, downplaying the risks of the coronavirus-caused COVID-19 disease.

“In view of the great demand for information, often from unreliable sources, the approach to the Coronavirus pandemic has become much greater and more serious than it should be treated,” Brochetto said in his letter. The CBDA has not acknowledged the COB’s directive that the trials be held without spectators.

While Brazil’s trials are at the end of April, the majority of countries with scheduled swimming Olympic Trials in April have cancelled, suspended, or postponed those events.

According to Johns Hopkins University, Brazil has 85 confirmed cases of coronavirus. That’s the most in South America, though a relatively-small number on a global scale. Concern in the country has grown after Fabio Wajngarten, the press secretary for Brazilian president Jair Bolsonaro, tested positive for coronavirus. On Wednesday, Wajnagarten was in close physical proximity to US President Donald Trump in Florida.

The South American Championships, that Brazil was expected to send a team to, have been cancelled.

Thats basically how the whole country of Brazil has been dealing with this situation. Can’t say I completely disagree.