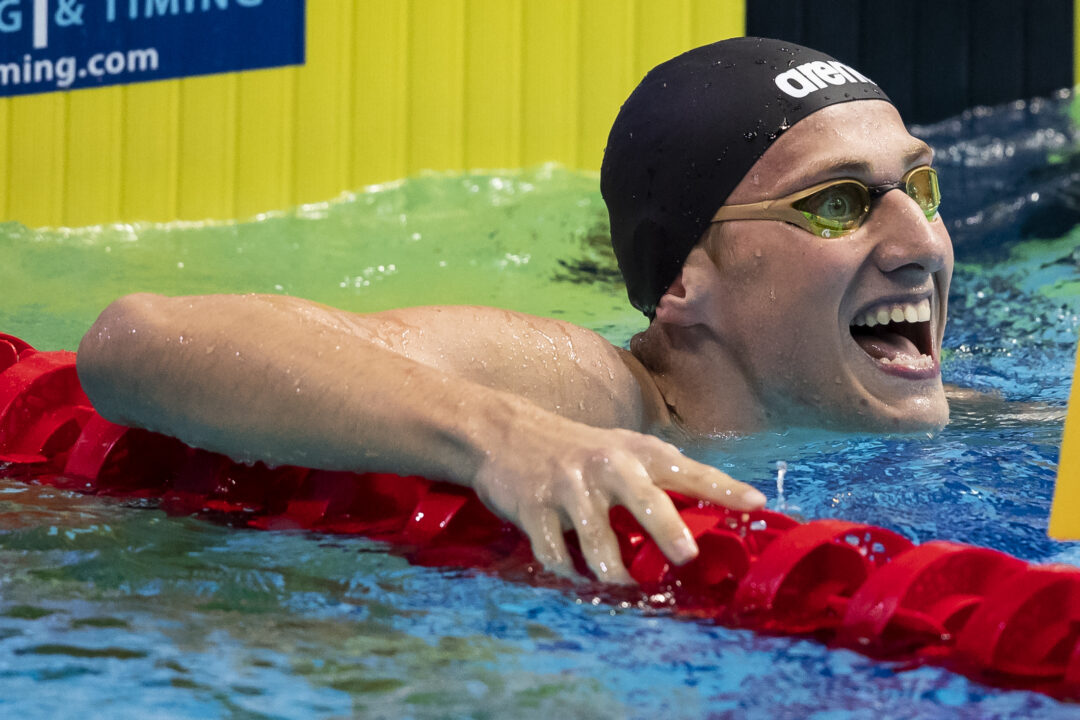 In the 400 IM, European Record holder Ilya Borodin put up a time of 3:58.08, making him the first man sub-4:00 in the world this year. Archive photo via Giorgio Scala / Deepbluemedia / Insidefoto

It was another fast day of action on Thursday during the penultimate night of finals from the 2022 Russian Short Course Championships in Kazan, headlined by a European Record-tying performance from Maria Kameneva.

Kameneva won the women’s 50 backstroke in a time of 25.60, equalling the continental mark established by Kira Toussaint in November 2020. Toussaint would then tie the record (at the time the world record) one month later.

Kameneva, 23, also obliterated the Russian Record of 26.05 she set in the semi-finals. You can read more on the record swim here.

There were a number of other blistering swims produced on the night, including two on the men’s side that rank inside the top-20 all-time.

Borodin’s performance is also the 16th-fastest in history, having set his personal best of 3:56.47 at last year’s SC World Championships, which ranks seventh all-time.

In the men’s 50 breaststroke semi-finals, former world record holder and Belarus native Ilya Shymanovich led the field in a time of 25.55, tying two of his prior performances for the 20th-fastest swim ever.

Shymanovich owns a lifetime best of 25.25, tying him for the second-fastest performer of all-time with South African Cameron van der Burgh.

Shymanovich takes over the top time in the world this year, while Russians Kirill Strelnikov (25.96) and Kirill Prigoda (25.98) also moved into the top six with their swims. Prigoda owns the National Record at 25.49.

At the beginning of the session, Shymanovich delivered one of the fastest relay legs in history, splitting 25.14 on Belarus’ 200 medley relay. The team of Viktar Staselovich (23.89), Shymanovich, Grigori Pekarski (22.11) and Ruslan Skamaroshka (21.52) combined for a time of 1:32.66, six-tenths shy of the national record set in 2017.

Kliment Kolesnikov, fresh off of setting a new world record in the 50 back on Wednesday, dominated the semis of the men’s 100 free in 45.86, ranking him third in the world this season behind Kyle Chalmers (45.52) and Maxime Grousset (45.61).

Finishers second through 13th were in the 47-second range, led by Vladislav Grinev (47.25).

I am wondering whether these athletes are being ‘tested’ for any performance enhancement smarties?

Is the NCAA testing their atheletes as well?

The NCAA does test their athletes, though the testing program is not as strict as the World Anti-Doping Code.

So what’s their excuse they used for not being mobilised into Ukraine?

Why is Swim Swam even covering this meet when Ukrainians tonight have no electricity, heat, water or internet? Media blackout of Russian swimming is the right thing to do here Swim Swam.

Unless something is truly promoting harmful or dangerous misinformation, there’s no reason for censorship or erasure (even then it’s hard to argue but that’s besides the point). Regardless of what’s happened, Russia exist, people live there, some of the people swim, and this is a website all about swimming.

This reminds me of a debate that happened in France in the midst of WW1. As Germany was the enemy, many called for German music to be banned. When the composer Maurice Ravel advocated against such a ban, those people then wanted his music banned as well.

Any discussion about Russia is not automatically an implicit endorsement of the regime, their propaganda, and their actions. Rather just as it… Read more »

I don’t think you get it. Russia has knocked out all power, heat, water and internet throughout the entirety of Ukraine in late November in frigid conditions. A death sentence for many civilians including women, children and the elderly. Meanwhile, Russians enjoy the luxury of competing in a swim meet, which requires power, heat, water and internet to exist?! What an absurdity. Really disappointed that SwimSwam covers this meet and doesn’t take a position.

If you think SwimSwam hasn’t taken a position you must not really be a reader. They’ve written several editorials taking positions.

I never got the “pretend like it’s not happening” crowd. Isn’t that what Russia wants? Nobody to remind the world of what they’re doing in Ukraine?

Pleased to see SwimSwam cover this meet. Hank – not covering Russian swimming would do nothing to end the conflict.

Covering Russian swimming in the Western media tacitly legitimizes it even while they are banned from competing by FINA. Russian athletes can exist in a bubble while Ukrainians are fighting for their survival besides the fact of being unable to swim in their country due to Russia destroying their infrastructure and security.

I don’t know why ‘obejectly reporting what is happening in Russia’ means ‘not taking a position’. To take a position, you should know what’s happening first! Information censorship could lead you to be exactly like some brainwashed Russians if it goes too far.

We understand It perfecto, the only one who speaks nosense is you

So now we know where Minakov is

We’ve known for most of the fall that he had committed to this meet – he told Russian media many weeks ago that he would compete at this event.

Cool. I thought it was a Russian meet end of summer/early fall he committed to.

Some pretty impressive times. Presumably the swimmers know this is the only meet they’ll be swimming in the near future so have gone all in with resting for it.