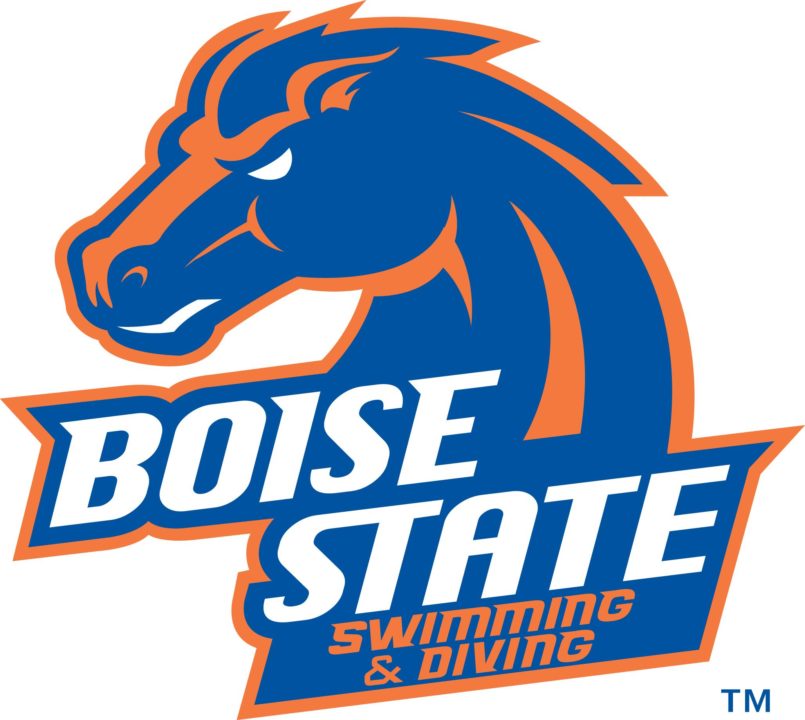 The Broncos won nine of sixteen events at home to defeat the Pioneers. Current photo via Boise State

The Boise State women hosted Denver’s team this Saturday at the Boise West YMCA. In a meet that came down to the final relay, the Broncos held on to defeat the Pioneers 156-144.

Boise State came out of the gate running, taking the 200 medley relay in 1:42.06 to Denver’s 1:44.32. The team of Sam Wicks, Laura Williams, Brittany Aoyama, and Katelyn Martin gained two full seconds over Denver on the back half to run away with the lead. Denver’s B relay touched third in 1:45.91.

Aoyama went on to win two individual events for the Broncos, securing victories in the 100 free and 100 fly. She led Denver’s Johanna Roas by two hundredths at the 50 but managed to widen the gap in the back half to take down the senior Pioneer 50.28 to 50.40. Aoyama then returned in the sprint butterfly event to win in 54.28, her fastest of seven dual meet swims this season, to defeat Denver’s Heidi Bradley (56.74).

Felicity Cann also captured two individual events for Boise State, winning the 200 and 500 freestyles. Cann was the only 200 freestyle competitor to break the 1:50 barrier, touching in 1:48.93 over her teammate Emma Chard‘s 1:51.28. Denver’s Maddie Myers claimed bronze in 1:51.76. Cann came back later in the meet to take the 500 title, again over Chard and Myers. The three all cracked five minutes with Cann leading the way in 4:54.46.

Denver’s Amanda Sanders won both breaststroke disciplines comfortably over Boise State’s Laura Williams, taking the 100 in 1:03.46 and the 200 in 2:17.07. Williams raced to the wall in 1:04.50 and 2:20.41, taking down her teammate Emily Mathis in both races. Heidi Bradley granted Denver another victory in the 200 fly, leading a podium sweep with fellow Broncos Grace Sommerville and Avery Niemann. Bradley touched in 2:05.78 over Sommerville’s time of 2:06.32.

Morgan McCormick became Denver’s second double winner of the night, taking the 200 backstroke in 1:59.99 and the 200 IM in 2:04.63. She touched nearly five seconds ahead of runner up Sam Wicks in the backstroke event, with Wicks and Abbey Sorensen claiming the minor medals in 2:04.83 and 2:05.42. McCormick led Myers and Sanders to another Denver one-two-three punch in the IM, with Myers hitting the wall second in 2:05.97.

Boise State took charge in the diving events, winning the one-meter through Kacee Olson and the three-meter through Karli Kriewall. Heading into the 400 free relay, Boise State led Denver 145-138, a narrow enough margin for Denver to take the meet victory. However, the Broncos prevailed with the team of Aoyama, Martin, Chard, and Cann, who touched in 3:23.01 to Denver’s 3:25.35 to both claim the event and close out the Broncos’ meet win.