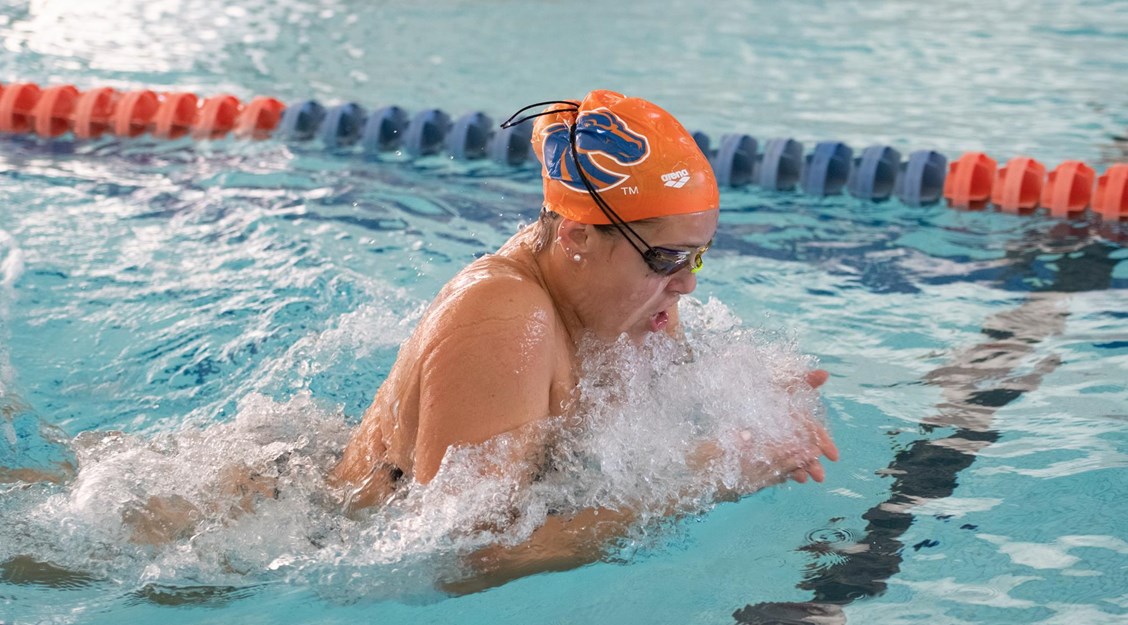 “We had a great start to the season,” said head coach Christine Mabile. “I thought the team had great energy and I felt like the work they’ve put in the last seven weeks really showed today. I really enjoyed seeing the entire team gave what they had to every race and made every race count. It’s hard to swim back-to-back-to-back in a dual meet so quickly, but they did a really good job of finishing one event then focusing on the next. They stayed focused and energized the whole meet and that’s how you win duals.”

“The newcomers were great today,” Mabile said. “The freshmen are really bringing a lot of that passion and energy to the team, they are a cheer squad,  they swam so well in their races that they pumped up the rest of the team. I was really happy with the entire team’s performance today, everyone contributed.”

Erlam won both springboard diving events taking the 3-meter with a 316.8 and the 1-meter with a personal-best 307.2. Tatum Thompkins also had a solid meet recording two career-best scores with a 306.08 on the 3-meter to place second and a 267.15 on the 1-meter to take third. All four dives by the Broncos were NCAA Zone qualifying scores.

The 200 free relay was won by Broncos’ A team, Vitort, Emmie Jennings, Madison Frederick and Pinger, in a time of 1:36.13. The Boise State C team made up of Wen, Schreuders, Carly Palmer and Hogg claimed third with a 1:38.92.

BOISE, Idaho – In the first conference dual of the season, the Cowgirl swimming and diving teams had a tough night as they fell to Boise State by a final score of 186-108 on Friday afternoon in Boise.

Junior Hannah Mclean-Leonard would have a very strong performance for the Cowgirls. Leonard began her night off as the butterfly leg in the 400 medley relay which the Cowgirls finished second in with a time of 3:52.41. She would win the 200 butterfly with a final time of 2:04.80 followed up by a first place finish in the 100 butterfly with a time of 55.39. The junior also swam the anchor leg of the 200 freestyle that clocked a mark of 1:36.84 and touched the wall in second.

“We had a solid day of racing in the pool today. Hannah (Mclean-Leonard) swept both of her events to continue her run in quality performances in those races. Olivia (Staver) continues to be impressive in the distance events with a solid win,” assistant coach Jim Bossert said. “Lainee (Jones) continues to race hard and to improve every week, along with Kaitlyn (Blattner) who proves she can be solid in a number of events. They raced hard throughout the meet and another good meet for us against a solid Mountain West opponent.”

Freshman Olivia Staver earned the Cowgirls first victory of the night as she would touch the wall first in the 1000 freestyle clocking a final time of 10:30.01. Fellow freshman Roxanne Ramirez would take fourth in the event with a time of 10:43.88 and sophomore Erin Eccleston placed fifth with a time of 10:58.50.

Sophomore Phoebe Browne would find herself at the top of the podium in the 200 breaststroke with a time of 2:23.84. Sophomore Andrea Niemann and junior Rylie Pilon would finish third and fifth in the event with times of 2:24.06 and 2:28.81, respectively.

In the 100 freestyle, the Cowgirls would pick up another race victory behind a strong performance from sophomore Lainee Jones. Jones would swim a 53.14 to claim the event while sophomore Sani Carsrud would also earn points in the event finishing fifth with a time of 54.06.

The 200 freestyle would another strong event for the Cowgirls on the evening as a pair of swimmers finished second and third. Jones clocked a time of 1:52.45 and was followed closely by junior Katelyn Blattner who had a time of 1:52.86.

In the diving events, redshirt junior Karla Contreras would be back in action. In the 3 meter event, Contreras tallied a total score of 274.80 which would earn her third place.  In 1-meter, she would improve and take second with a score of 286.65 which is a NCAA B Standard cut score.

Both men’s and women’s swimming and diving teams be back in action next Friday against Air Force. The meet is set to begin at 4 p.m. MT at Laramie High School.