Blueseventy Swim of the Week: Santos & Brazil Leading In Speed 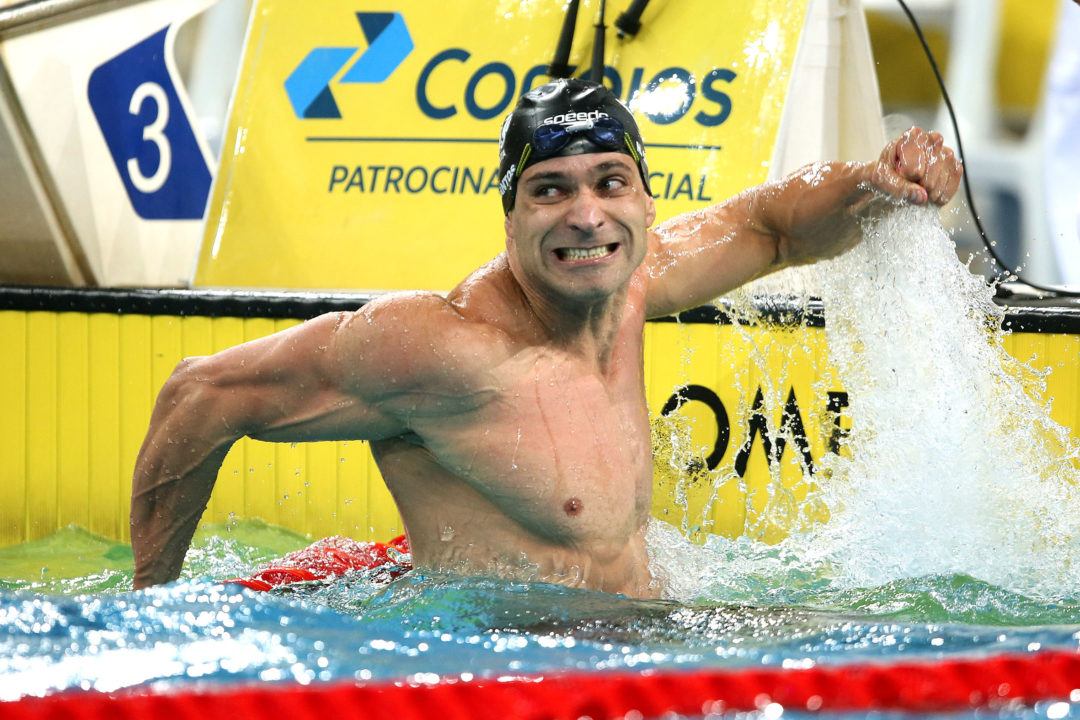 Brazil's Maria Lenk Trophy wasn't the world's deepest world champ trials meet, nor the strongest overall. But in a very specific sense, it may have been the fastest. Current photo via Satiro Sodre/SS Press

Brazil’s Maria Lenk Trophy wasn’t the world’s deepest world champ trials meet, nor the strongest overall. But in a very specific sense, it may have been the fastest.

Brazilian swimmers absolutely crushed the 50-meter races, showing perhaps the best pure speed of any meet so far this year.

The highlight was Nicholas Santos, who scorched a textile-best 22.61 in the 50 fly, breaking a national record and coming within two tenths of the world record. That world mark was set in 2009 at the height of the super-suit era, which seemed to aid the sprint events more than any others. Spain’s Rafael Munoz was 22.43 that year, and Serbia’s Milorad Cavic 22.67. Santos has now split those two times to sit #2 all-time and earn the top swim ever done in textile.

But he wasn’t the only 50-meter swimmer to impress. He wasn’t even the only 50 flyer. Brazil saw its top three finishers jump to #1, #3 and #4 in the world ranks, with Henrique Martins and Cesar Cielo also checking in with big times.

Ultimately, Brazil’s Maria Lenk meet saw 9 different Brazilian swimmers crack the top 5 in the world ranks for this season in a 50-meter race. Brazil now has a swimmer in the top 5 in every single men’s event of 50 meters along with two of four women’s races.

Here’s a look at all of Brazil’s top-5 world ranked swims from Maria Lenk:

Every one of these swims came in the past week, and that doesn’t even include a 6th-ranked 21.79 from Cesar Cielo in the 50 free. That is just .05 seconds out of the top 5 and a tenth out of 4th place.

This doesn’t necessarily mean Brazil will be topping the overall medal table at this summer’s World Championships in Budapest. But it does suggest that the nation is primed to use perhaps its greatest strength – pure, unbridled speed – to take advantage of the 50-meter events they didn’t have at last summer’s Olympic Games.

Aparty maybe from Dressel (if he swims it) I don´t see any guy on US who could deliver a sub-23 50 fly.. Apart from Lundquist (With suits) no one went sub-23 from US

Are best chances are Andrew and Smith going off current proven times. I’m sure Caeleb can put down a wicked fast one though.

USA will take care of 50s of stroke when they will be at olympic games.
And yes, I’m pretty sure a Dressel fully tapered can swim under 23 in the 50 fly. But honesly I prefer to see him much more focus on the 100 free in long course.