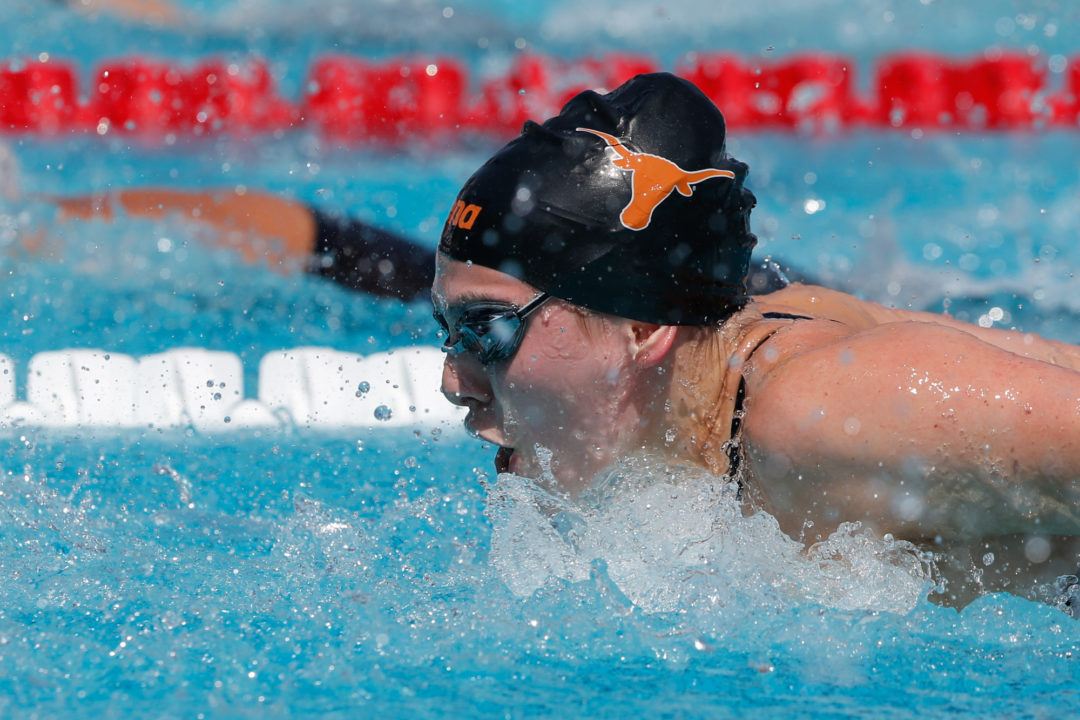 Disclaimer: Blueseventy Swim of the Week is not meant to be a conclusive selection of the best overall swim of... Archive photo via Tim Binning/TheSwimPictures.com

In a dual with Texas A&M last week, the Texas women put up what is by far the fastest 400 free relay in the nation this season – and they did it without even swimming their best lineup.

The Longhorns went 3:17.41, which would have won the dual meet by five seconds had the meet not already been out of hand and Texas exhibitioning its top swimmers. That team was built in four sub-50 splits – an impressive feat considering only 27 swimmers in the entire nation have broken 50 individually so far this season.

The relay was freshman Julia Cook (49.70), senior Anelise Diener (49.44), senior Remedy Rule (49.52) and junior Claire Adams (48.75), and came at the end of a long dual meet, meaning none of these athletes was entirely fresh. But the relay could potentially be even faster, as Texas has at least two other options come post-season.

Freshman Grace Ariola has a lifetime-best of 48.30, better than the best times of Diener or Rule. But Ariola had already swum her four events against A&M and couldn’t compete on the relay. Meanwhile from the B relay, senior Brooke Hansen outsplit two of the three flying start splits on the A relay, going 49.28. Hansen was on this relay at NCAAs last year and went 48.6, so she’s another likely option come NCAAs.

In fact, just totaling up the lifetime-bests of Texas’s top swimmers individually yields an incredible 3:12.18 projected time: faster than Texas went at NCAAs last year (without Cook and Ariola in the mix) and good enough for 7th in the nation based on 2018 NCAA results:

Adding in drops from even mediocre relay exchanges from the final three legs means this team can probably go at least a second faster. Last year, it took 3:07.9 to win NCAAs, but only 3:10.5 to take third. No matter who winds up on this relay at the end of the season, there’s a very good chance Texas will be among the top teams in the nation when the dust settles.