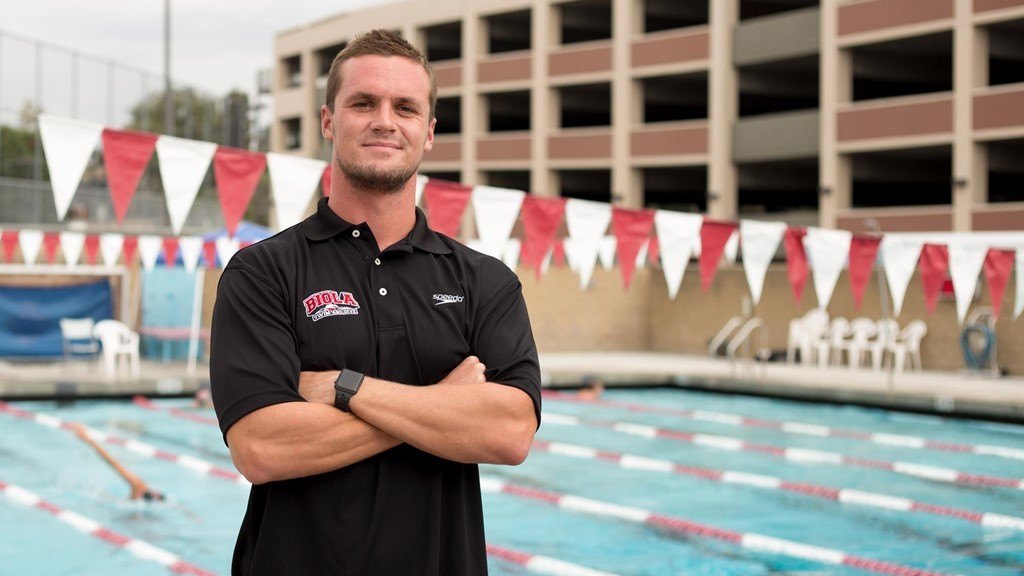 Kauth comes to Biola after spending the last three years as an assistant coach at Mater Dei High School in Santa Ana and at Concordia University Irvine.

“Ryan is a strong fit for Biola Athletics,” said Director of Athletics Dr. Bethany Miller. “He has great technical expertise, cares deeply about his student-athletes and has strong program administrative experiences.”

Before moving into coaching, Kauth swam at Concordia and was the president of the school’s student-athlete advisory committee. He graduated in May of 2015 with a bachelor’s degree in exercise and sports science and completed his work for a master’s in coaching and athletic administration in May of 2016.

He was a standout swimmer during his time in green and yellow from 2010 through 2015. Kauth was a four-time NAIA National Championship meet qualifier and earned a spot in an event’s finals five times.

At Mater Dei, he coached 13 National High School All-Americans and 30 CIF-Division I Finalists; including a Back-to-Back CIF Division I Champion Sprint Freestyler, who finished 3rd-Fastest in Orange County History.

Outside of his coaching roles at Mater Dei and Concordia, Kauth has NCAA Division I coaching experience as a result of coaching at the University of Texas’ Longhorn Swim Camp during the summer of 2016 and 2017. Here he worked alongside world renown USA coaches, Eddie Reese and Carol Capitani and spent five weeks each summer working with Olympic gold medalist swimmers and coaches in a top-notch NCAA DI environment.

“I’m really excited to be at Biola. It’s a great opportunity,” said Kauth. “As a young, growing coach this is a great head coaching spot for me. The team has been on the rise the last couple of years, and I am getting on board at the perfect time to continue building the program. I am excited to be here, because I’ve found the perfect position to share my Christian faith and my swimming background.”

With his wealth of coaching experience coupled with his knowledge of competing at a private Christian university, Kauth brings everything Biola is looking for in a head coach. He is eager to work with the student-athletes and help them reach their full potential athletically, relationally, emotionally, spiritually and academically.

Kauth begins his duties immediately and will be in charge of the program until the end of the 2017-18 season. He will then be considered along with outside candidates for a permanent head coaching position.