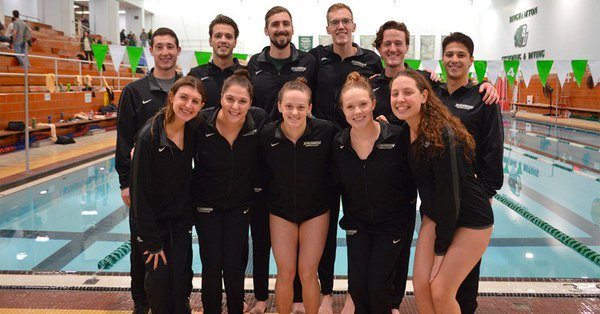 VESTAL, N.Y. – Seniors Alex Brion and Brooke Pettis as well as sophomore Kaitlyn Smolar all won two individual events, leading the Binghamton swimming & diving teams to a sweep of St. Bonaventure on Senior Day at the Patricia A. Saunders Aquatic Center. The women (7-1) defeated the Bonnies 159-145 while the men recorded a 155-145 victory.

With the regular season now concluded, the Bearcat women tied their second-highest dual win total in a season during their 18-year NCAA Division I era. They finished the 2002-03 campaign 11-4 and were 7-6 in 2009-10. Furthermore, the combined winning percentage of both Binghamton squads this season (.846 with an 11-2 overall record) is the best during the Bearcats’ Division I era.

Brion swept the men’s 50 free (21.04) and 100 free (47.33). He also anchored the first-place 200 medley relay team, which also consisted of seniors Zachary Kaplan and Matthew DeVito as well as sophomore Patrick Wilson and recorded a time of 1:34.37. Brion and Wilson then joined juniors Thomas Mackey and Tyler Meyers to win the 400 free relay with a first-place time of 3:09.61.

“It was an amazing ending for us on both teams and I can’t say enough about how we finished the meet,” head coach Brad Smith said. “Give Kudos to St. Bonaventure — they are a good program that really brought it today and gave us all we could handle. It was the most dramatic finish to a meet on both sides in my 13 years as a coach.”

“Our seniors really wanted to perform well today,” Smith said. “I am so proud of all of them. This meet couldn’t have been scripted out any better considering how much they have done for our program. I was telling some of them during the final break that this was setting up to be the perfect ending for their class, being their last meet at home.”

Binghamton now has three weeks to prepare for the America East Championships. The four-day event will be held Feb. 14-17 with Worcester Polytechnic Institute (WPI) serving as the host school.

“We are in a good spot right now,” Smith said. “Our teams are starting to peak at the right time and a meet like today really helps us get ready for the conference meet. I told them all to enjoy the victory this weekend but to be back ready to go on Monday.”

NOTES: Binghamton also finished the dual meet season undefeated at home. The men were 3-0 while the women were 4-0.

Nick Burdo added to the Bonnies’ winning ways in the 200-freestyle, placing first with a time of 1:35.25. Edward Donovan turned in a time 1:55.37 in the 200-butterfly, earning himself a first place finish.

Hylton Collinson also captured victory, turning in a first place performance in the 200-breaststroke by winning with a time of 2:06.63. Chauncey Nicholas earned his first victory of the season in the 100-butterfly as well, finishing in 52.35.

Sophomore Katrina Wardner grabbed the first victory for the Bonnies in the 200-freestyle. She clocked in at 1:57.40, a full second ahead of second place. Freshman Claire Schaef also scored for the Brown and White in the 200-free, posting a time of 2:00.73.

Rachel Kimmel captured the win in the 100-breaststroke with a time of 1:04.80, two seconds ahead of second place. She followed that up by winning the 200-breaststroke as well for her second victory of the day in 2:23.58.

Mia Cote swam a 2:09.13 in the 200-butterfly to capture nine points for the Bonnies. Ivana Janssen added nine more points for the good guys, winning the 50-freestyle in 24.88.

In the 1-meter dive, Anna Campos captured first place with a total score of 269.84. On the 3-meter board, the Bonnies swept first, second and third away from the Bearcats. Elena Rohr took first with 259.73 points, Brittany Hart finished second with 258.38 points and Campos grabbed third with 256.87 points.

Zanre Oberholzer also won for the Bonnies in the 200-backstroke with a winning time of 2:09.08.

The Bonnies are back in action Saturday, Feb. 2 at the Reilly Center Pool against Niagara. Prior to Saturday’s meet the Bonnies will honor their seniors: Katherine Craig, Frances Erney, Adele Ferris, Brittany Hart, Rachel Taylor, Edward Donovan and John Pietrucha.