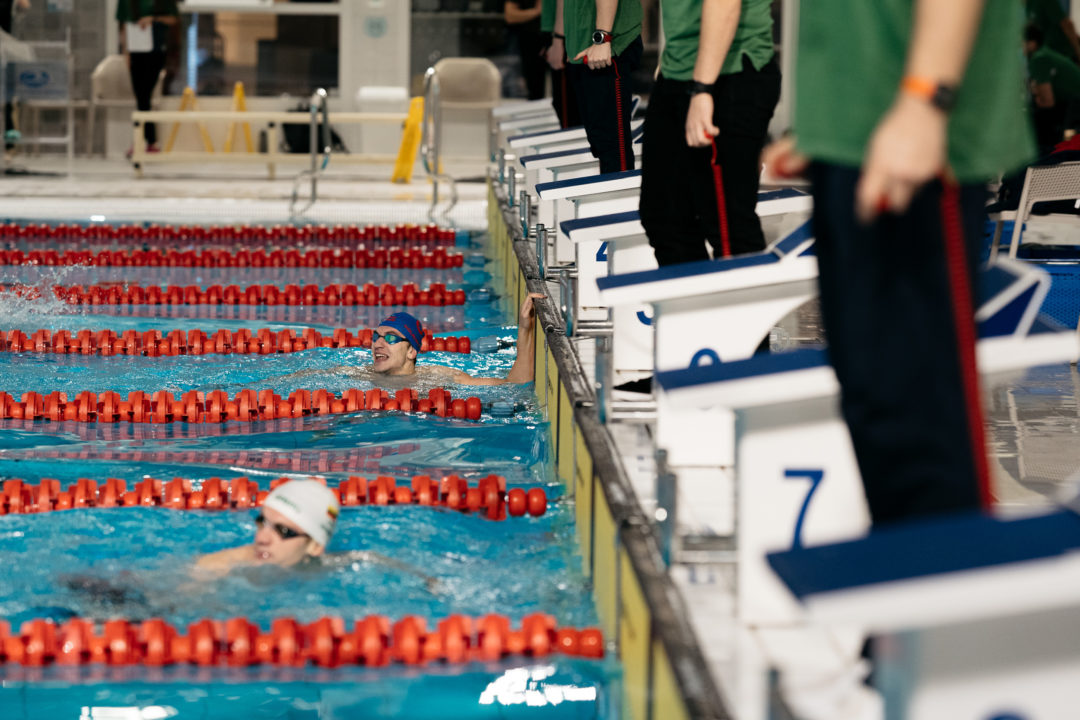 Andrius Sidlauskas (59.83) and Giedrius Titenis (59.92) both went under the Olympic qualifying time in the men's 100 breaststroke. Current photo via Justina Butkutė & Danas Macijauskas

The second night of finals from the 2020 Lithuanian Long Course Championships kicked off with some excitement Friday night, as Andrius Sidlauskas and Giedrius Titenis swam a 100 breaststroke time trial head-to-head at the beginning of the session.

In all likelihood, the event was put together in an effort to give Titenis another opportunity at hitting the Olympic ‘A’ qualifying time of 59.93, after he missed it in both a time trial prior to the meet (1:00.61) and in Thursday’s final (1:01.07). Sidlauskas, who won the event on day one in 1:00.10, has already qualified for the Games with a 59.66 swim at last summer’s World Championships.

The event proved successful, as Sidlauskas won in 59.83, with Titenis less than a tenth back in 59.92 to sneak under the qualifying time by .01. Titenis, 31, is the national record holder in the event, having been 58.96 in 2015, but this performance marks his fastest since April of 2018, and should earn him a spot on a fourth Olympic team.

Just minutes after this race, the two swimmers were back in the water for the 50 breast final, where Sidlauskas triumphed in 28.82 after a 28.45 prelim swim. Mantas Lisauskas claimed second in 29.17, while Titenis took third in 29.26 after going 28.53 in the heats.

Another highlight from the session came in the men’s 100 freestyle, where two of the country’s biggest names in Danas Rapsys and Simonas Bilis went to battle.

In third, Daniil Pancerevas set another 16 & Under age record in 50.22, breaking the longstanding mark of 50.39. On day one, Pancerevas erased the records in both the 200 free and 50 fly.

Wonder if they could get a national relay going under 3.16? It might take 3.15.3 to make it to Tokyo and that might be to fast.
Wonder it Belgium will withdrawal their 4×100 Free Relay spots since Timmers have retired (a few countries have done that in the past including Sweden 4×200 Free Relay for women)?

I think that’ll be the fourth Olympic team for Titenis, he swam in Beijing. Shame he could never quite put it all together at the big meets, he was mostly very consistent over the past decade+.