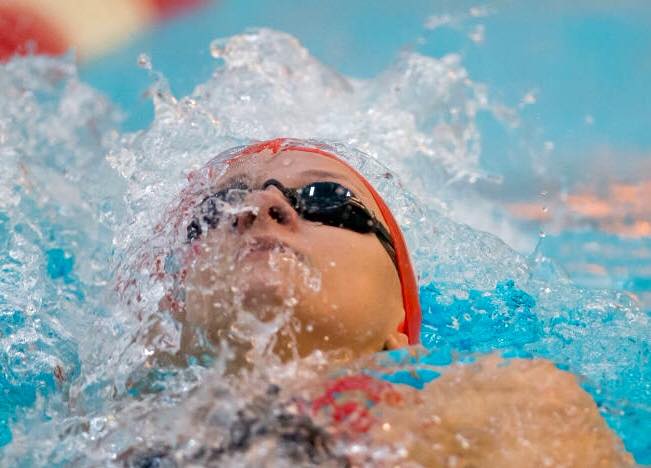 The University of Nebraska is one of the newer members of the Big Ten after having only been added in... Archive photo via Rebekah Land

The University of Nebraska is one of the newer members of the Big Ten after having only been added in 2011, but they’ve enjoyed a number of successful seasons since their joining of the conference. This season, the team will look to senior Rebekah Land to continue this trend and to be a driving force behind the Cornhuskers’ charge in Columbus.

Land hails from Hannibal, Missouri, and upon joining the Cornhuskers in the 2011-12 season, she immediately became a contributing member of the backstroke and sprint freestyle groups. At the team’s first Big Ten Championships in 2012, Land enjoyed season-best performances in the 50 free (23.78, 54th) and the 200 back (2:03.61, 40th), and she also took 35th in the 100 back with a 56.81. She would also provide the lead-off leg on the Cornhuskers’ 11th place finishing 200 medley relay and the third leg of the team’s 10th place finishing 200 free relay.

Building off the success she enjoyed during her first two seasons under head coach Pablo Morales, Rebekah would have her best collegiate season yet during the 2013-14 season. Similar to her previous two years, she saved her best for the end of the season, recording four lifetime bests at the conference championships.

Outside of the pool, Land has also accomplished much in the academic spectrum. She is a 2014 Big Ten Distinguished Scholar and she has been a member of the Nebraska Scholar-Athlete honor roll three times during her time in Lincoln.

Entering her final conference meet, Rebekah Land is in a favorable position to turn some heads in Columbus. Her outstanding junior season should provide plenty of momentum for her on an individual level, and she has established on numerous instances that she is ready to race when the end of the season is drawing nigh. A big swim in any of her events could launch her into a big heat, providing some big points for a very competitive Cornhusker team that is hungry to climb a few places in the overall team standings after a 9th place finish last year.

Funny story, I was homeschooled growing up and my father wanted my brothers and I to get involved in a sport. I was nine years old and I heard the head coach speak about only wanting swimmers who were 100% dedicated. My dad told me I could join the following year and I started balling my eyes out, with a quivering lip I looked at him and said, “I can at least try.” The rest is history.

I can’t think of a single race or meet that has been specifically my favorite because every practice & every swim meet has been full of laughter, fun, and accomplishments. I’m hoping my favorite collegiate swimming memory with come this year at big tens when my team reaches its goal of 201 🙂

Last year, you went personal bests in the 100 back and 200 back at the Big Ten Championships, both swims eclipsing your previous bests from your high school and club days. Can you talk a little bit about what changes you made to your training, or do you feel like there were other factors that helped you improve so much during your junior year?

A lot changed from sophomore to junior year both in and out of the water. Personally, I struggled with depression and anxiety to a point where I would have panic attacks before races or in practice. I remember before my 200 back the summer before junior year, I had a moment of clarity thanks to my faith. I was looking to both sides of me before finals and there was a moment when all the negative thoughts were silenced and the little girl that wanted a chance to swim told me that I belonged there. I said a prayer and moments later, peace overwhelmed me. I knew then what I remind myself every time I’m anxious, I am exactly where God wants me, I am prepared to give my best and the results don’t matter as long as I know I gave it my all.

This mental shift was what sparked that love for swimming. I decided to give up that fear of failure and just trust my coaches and training. I look to my teammates for the encouragement and confidence I need before my races. I’m lucky to have coaches and teammates who understand my anxiety and support me and help me overcome it. I owe my success to them, especially the girls I came in here with freshman year, through it all they have loved me and believed in me.

Many of our readers are well aware of the collegiate and international achievements of your coach, Pablo Morales, and he is often regarded as one of the greatest male swimmers in U.S. history. Can you describe what it is like to train under the tutelage of such an accomplished mentor, and do you feel like that gives Nebraska’s program a very unique atmosphere?

He is my hero! He is one of the most humble men on the planet. He was such an incredible swimmer but his character and discipline is inspiring. He knows so much about this sport and I can honestly say as a swimmer he knows me better than I know myself. He gives me goal times in practice and I usually say something under my breath about it not going to happen, then I end up going the time he said I could. This happens ALL THE TIME! He believes in us as a team but he is so much more than a coach, he is an incredible role model. I can’t say that his amazing talent is what gives my team a “unique atmosphere” but I can tell you that coach Pab’s sense of humor certainly does! He is so silly sometimes! He NEVER yells at us, he doesn’t dwell on negatives; he helps us keep our eyes focused on what’s to come

Easy question, my momma! God knew what he was doing when He gave me her for a mom. She has kept me going through every bad race, injury, or even family issues that made me want to walk away from my sport to be with my family. When I dealt with depression she reminded me to focus on things I love and for me, its been swimming and the feel that I have when gliding through the water. She has kept me going through it all, always telling me to trust God’s plan for my life.

I currently work for Chipotle Mexican Grill (the greatest food ever!), I’m looking to grow with the company and hopefully work in their corporate office after I graduate. While looking long term, I see myself going back to school and becoming a pediatric nurse.

What should we look forward to from Nebraska as a whole at this year’s Big Ten Championships?

Lots of fast swimming from the Cornhuskers! We’ve been focused on Big Tens since last year, we have worked harder than ever before and I have confidence in our training. I can’t wait to be there with the greatest teammates I could’ve ever asked for.

Awesome to read a bit about your background story, you’ve come a long ways. Good luck at Big Tens!