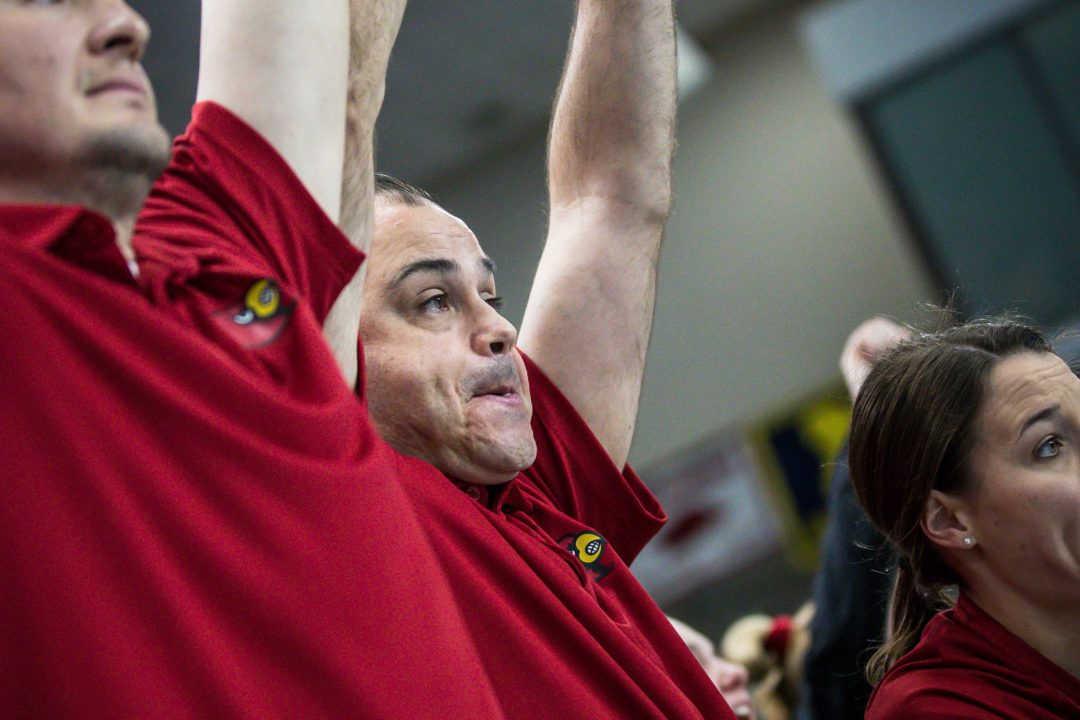 The final day of the 2019 Purdue Invite saw a pair of milers and a 200 backstroker with some big time drops to claim wins.

The final day of the 2019 Purdue Invite didn’t see any super-notable times, in terms of looking ahead to the end of the season, but there were a few swimmers who dropped some big times to claim wins.

Louisville freshman Maddie Luther was projected to make an impact primarily for the Cardinals as a 200/500 freestyler, and she had some solid swims in those two events earlier this week. But her first big win came tonight in the 1650, where she knocked five seconds off her lifetime best to win in 16:27.04. That previous lifetime best was barely three weeks old, as prior to this month, her PR was a 17:20.37 from early 2017.

On the men’s side, Louisville sophomore Hayden Curley may have had an even bigger performance, at least in terms of championships scoring impact. He won the 1650 tonight in 14:52.19, good for a NCAA ‘B’ cut and a solid chance at a NCAA invite, as that’s nearly two seconds faster than what it took to punch the ticket in this event last year. That’s also an 11 second improvement on Curley’s personal best time, as well as a 17 second improvement from where he was last fall. A similar six second improvement from fall to spring this season could put him on the edge of scoring at NCAA championships.

Purdue freshman Michael Juengel was the 3rd swimmer of the evening to parlay a big time drop into an individual victory. He came into the meet today with a best time of just over 1:47 in the 200 back, but dropped three seconds to get the win with a 1:43.75. Louisville sophomore Mitchell Whyte came in 2nd that race by way of some relatively strange spliting. Whyte went out in 24.08, the quickest opening 50 by half a second, then went 27.13 and 26.69, allowing Juengel to take the lead, before closing in 25.97 and touching 0.12s second behind Juengel.

Most of the victories on the final day went to swimmers who’d already won individual events earlier in the meet. Pitt’s Blaise Vera followed up his nation-leading 19.10 in the 50 free Thursday with a 42.84 victory in the 100 free tonight. That’s faster than any other 100 free time heading into this week’s round of invites, although several men eclipsed that mark at the Tennessee Invite earlier this evening.

Louisville’s Mariia Astashkina finished off the breaststroke sweep with a 2:09.55 victory in the 200 breast, just under last year’s NCAA invite time. Teammate Ashlyn Schoof picked up the backstroke sweep with a 1:56.03 in the 200 back tonight. Pitt’s Valerie Daigneault closed hard in that race, but couldn’t quite run her down, settling for 2nd with a time of 1:56.11.

In a repeat of last night’s action, Purdue’s Trent Pellini and Louisville’s Evgenii Somov finished 1-2 in the 200 breast. Pellini’s time tonight of 1:55.30 wasn’t quite as eye-popping as his 51.8 last night, but it’s well under the NCAA ‘B’ cut, and his 100 breast swim last night should guarantee him a punched ticket for March. Somov also earned a ‘B’ cut with his time of 1:56.77.

Louisville junior Nick Albiero closed out the individual events with a 1:42.55 in the 200 fly to pair with his victory in the 100 fly yesterday.