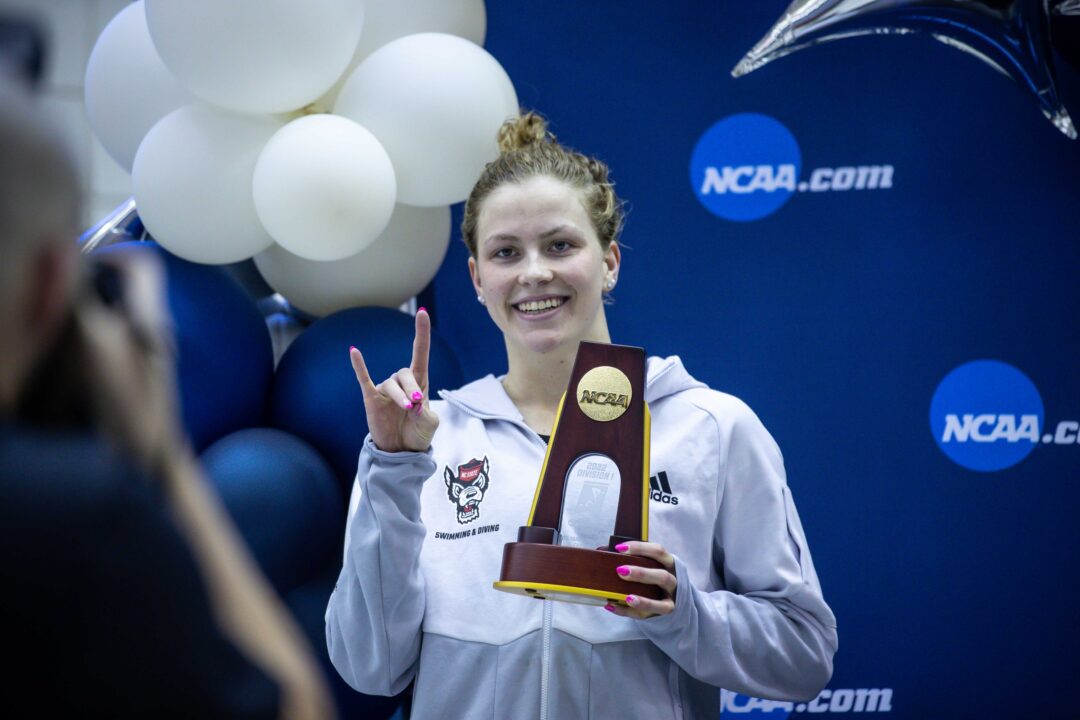 Berkoff swam a 52.45 100 back on Saturday, which sits behind Maggie MacNeil's 51.10 as the second-fastest time this season in official competition. Archive photo via Jack Spitser/Spitser Photography

On Saturday, the NC State men and women extended upon their lead against Tennessee, closing out on their season opener by winning eleven more events and taking the overall win on both sides.

As always, with relays come the analysis about splits. The 20.09 from Korstanje is a particularly eye-popping time for October, just over half a second off the 19.55 he split at NCAAs last year. On freestyle, McCarty and Curtiss splitting nearly the exact same time creates debate on who’s going to be the anchor come time for championship season. Curtiss has the faster personal best at 18.74, but McCarty was just 0.09 seconds off of his own on Friday—something that points towards major drops that could come when he’s fully rested.

The 100 fly was won by Korstanje, who clocked a 46.39 and beat out Miller (46.62) and Crooks (46.84). Korstanje was 0.02 seconds faster than the 46.41 he went at last year’s edition of the NC State-Tennessee meet, which also happened in mid-October. Next, Stokowski won the 100 back by over a second in 46.13, a time that is faster than what any other swimmer has gone this year in bona fide competition, only sitting behind his 45.71 relay leadoff from day one of this meet.

The Vols had one of their best individual events showings to close of the meet, as Jarel Dillard (53.22), Houlie (53.62), and Lyub Epitropov (55.06) went 1-2-3 in the 100 breast. Giovanni Izzo, NC State’s top finisher in this race, was fourth with a 55.07. And while people shouldn’t be jumping towards conclusions because of a dual meet, this race is somewhat representative of NC State’s breaststroke weakness, as the team is taking major hit following the loss of Rafael Kusto—the team’s top 100 breaststroker last year.

NC State’s Abbey Webb opened things off individually by clocking a 1:47.05 in the 200 free, winning the race by over two seconds. She nearly even-split her race, opening in 53.33 and closing in 53.72. In addition, she also clocked a 26.61 final 50 split, which was the only sub-27 closing split of the field. Webb was significantly faster than she was in this race at last year’s NC State-Tennessee dual, as in that meet she had finished fourth in 1:49.35.

In the 400 IM, NC State’s Grace Sheble won in a time of 4:19.05. She wasn’t at the NC State-Tennessee meet last year, but her time on Saturday was three seconds faster than the 4:22.03 she swam at NC State’s dual meet against Auburn and Kentucky last year, which was her first official 400 IM of the 2021-22 season. This could indicate a potential bounce back year for Sheble, who entered last season as the #3 recruit in the class of 2021 but only ended up scoring one point at NCAAs.

Next, NCAA, U.S. Open, and American record holder Berkoff took the 100 back by nearly a second, clocking a 52.45. She was slightly slower than her of 52.15 from last year’s version of this meet and her 52.29 relay leadoff from Friday that didn’t count because her team got DQed, but her time is still good enough to make her the second-fastest swimmer this year in official NCAA competition, just behind MacNeil who went 51.10.

Will/has there been a recap of the Cal/Utah meet from last week?

Insane Depth that NC State men showed in sprinting. Their B team put up the fastest unsuited 200 Medley relay time .6 off of the top time in the nation. The B team! And this was with people like Noah Henderson and Hunter Tapp missing.

Then look at the distance program, you have Dant and Gallant battling it out for top positioning with Norris and Plage not far behind, and Owen Lloyd missing from the meet. Mikey Moore was absent from displaying IM dominance for the pack. While breastroke may look concerning, Mason Hunter seems to be putting up similar October times comparable to his January performances before he went 51 his junior year (indicative he is a huge… Read more »

IM is in good hands. Watch what happens as the freshman get some experience. You won’t see Ponsler give up a lead in the backstroke leg again maybe ever. Norris is solid too and and blow up anytime. These guys are young and hungry and going to be a force.

K Chilly knows too much

For more than a decade at men’s NCAAs it’s been Texas, then Cal or Cal, then Texas & after that a wide gap. NC State men won’t unsettle the top 2 this year, but that wide gap is gone. It’s a big three now.

Yes, I missed UM 2013 breaking up the Cal/Texas lock market.

My guess is NCS me could get within 60-70ish points of second this year. They’re closing in materially this year.

just dont have breaststrokers. All the sprint depth is going to block their own teammates from points.

I am truly thinking these guys have a shot at upsetting Texas and Cal this year. If they hit on all cylinders they will be incredible.

@Yanyan off topic, but do you know why USA Swimming hasn’t published the SC Worlds roster yet? Have you asked/ received a response from them?

It was supposed to be uploaded on the 14th of October. 🤷‍♂️🤷‍♂️

No, I haven’t asked. But I’m not surprised that it isn’t out yet because they were a couple weeks late with the roster last year too.