The Benefits of a Larger Olympic Trials 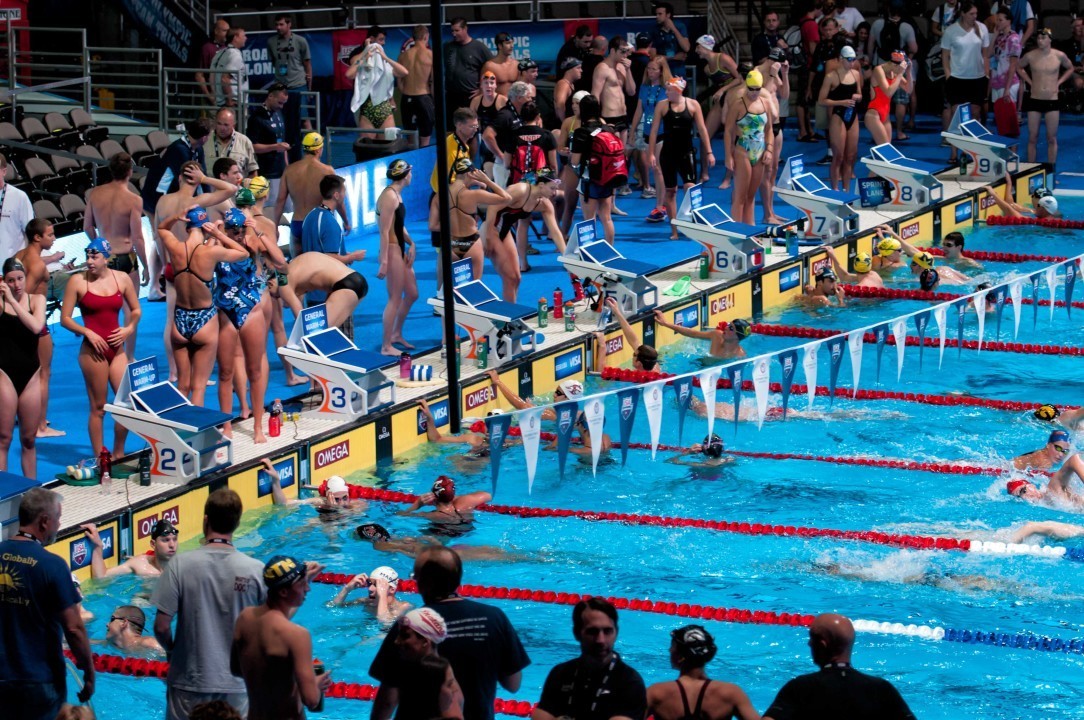 Update: A previous version of this article listed the 2008 Olympic Team based on the psych sheet, not the final... Current photo via Mike Lewis/Ola Vista Photography

Update: A previous version of this article listed the 2008 Olympic Team based on the psych sheet, not the final results. This has been corrected.

The number of swimmers who qualify for Olympic Trials has been increasing. In 2012, 1831 athletes participated up from 1237 in 2008 and 689 in 2004. USA Swimming’s website says that 1660 athletes have qualified for the 2016 meet as of April 18th. The majority of swimmers at the U.S. Olympic Trials have no realistic shot at making the Olympics (more on that here).  Anyone outside the top 24 is an extreme long shot and the 689 swimmers in 2004 was enough for there to be around 40 athletes in each event.

The larger meet means that  many young swimmers are able to gain real Olympic Trials experience, and this is often billed as a selling point (besides the obvious draw to fill seats in a basketball arena). While the extent of those benefits is open to debate (the pressure a 100th seed is under is, for most people, less that on a top 4 seed), undeniably many more US swimmers have trials experience by the time they’re really ready to contend for a spot than used to.

The 2008 Olympic Team had 11 swimmers that didn’t swim at the 2004 Trials (or 10 if you don’t think Dara Torres should count, because she already had Olympic experience but was sort of retired for a while). The 2012 team only had 5 swimmers that didn’t participate in the 2008 trials.  15 swimmers on the 2012 team previously swam in a Trials where their best finish was outside the top 24. Here’s a look at the 2012 team member’s top finish at previous Olympic Trials. Jason Lezak’s 30th place in the 50 free in 1996 is missing from the table because I didn’t want an extra column for one swim.

(Number in table is highest finish from that year’s Trials).

Only 5 2008 team members had a previous trials where they finished outside the top 24. Here’s the top trials finish at previous Trials for members of the 2008 Olympic team. Missing are Dara Torres’ finishes from 1984, 1988, and 1992 (she made the team each of those years).

Based on the recent trend, there’s a good chance that the number of Olympians with non-contender Trials experience will be higher than ever this year.

Pretty sure Dana Vollmer did not make 2008 team?

I grabbed the Olympic team from the psych sheet instead of the final trials results. This has been corrected.

One correction: Megan Jendrick competed in the 2000 and 2004 Trials under the name Megan Quann and was a Olympian in 2000.
I’m a bit confused by your numbers. By my calculations in 2012, there were only 9 swimmers with their best previous Trials finishes outside of the top 24- Bootsma, Franklin, Weltz, Neal, Perdue, Feigen, Dwyer, Donahue, and Houchin (not including the 4 that had never been to Trials before- Larson, Jaeger, Ledecky, and Vreeland).
In 2008, there were 8 Trials rookies who made the team–Ritter, Schmitt, Wildman-Tobriner, Marshall, Walters, Beisel, Hersey, and Brunelli and only one former Trials competitor with his highest previous finish outside of the top 24, Jones, who made the team.
Also,… Read more »

Best finish at a previous trials, not best ever finish at a previous trials. I’m counting, for example, Dana Vollmer who got 43rd in the 2000 trials in the 100 fly. The idea was to count swimmers who were on an Olympic Team who had previously been to a trials where they had no realistic chance to qualify. First time trials competitors don’t have non-contender trials experience, they have no trials experience.

Thanks for Megan Jendrick. I missed her.

There are always some numbers to crunch and perspectives to share- but I never have gotten this concept of “realistic” god, if any athlete ever considered that we would still be at over 4 minutes for running the mile. I regularly see swimmers amaze themselves with swimming amazing races where they drop so much time they themselves are shocked- there is never anything “realistic” about any of these performances.
The experience pitch- yes, that is a sound one- getting a really good taper for that particular swimmer- that is an amazing art as well for swimmers at the right stage of training and swimming- and after all, the body can only go where the mind can take it- and… Read more »

I think its a little big at its current size. If they sell out the arena now they can consider a 20-25% reduction in swimmers or else they need to get a bigger facility. I think the answer is to reduce the number of swimmers to about 80 per an event and some of the longer races only 60

Why limit longer events to fewer swimmers? It happens at so many levels already and is do frustrating.

I agree. Also, it seems like there are big drops and more surprises in distance events with people coming out of nowhere (I have no evidence of this, just my perception).

I dont know why this would be frustrating the pool of swimmers capable of making the final and ultimately qualifying for the team is smaller in a distance event, maybe you are looking at the time drops from a swimmer’s in season swim. Its pretty common to see big drops of 20-30 seconds when they taper but from last taper to current taper I dont think you see that at the national level maybe with younger swimmers at the local level. The article linked above details the math and provides an analysis based on 2012 as to why the lower seeds have almost no hope of making the team. The idea of fewer swimmers is really just to save time… Read more »

TAA, your sexism is showing. Please tuck it in.

Considering the 400 IM Trials cut is 4:54 for women, there shouldn’t be too many swims over 5:00. A guy going 50.25 is still under the trials qualifying time while 5:00 for a women’s 400 IM isn’t, so you examples are exaggerated. Also, I second David Berkoff’s comment. I get very bored watching men swim.

I agree, most fans are not going to want to sit through more 1500/800’s than they have too…male or female, nor do they want to see 20 heats of anything for prelims. In addition the pool is much cleaner with a smaller number of athletes, yes a smaller trials is the way to go 🙂

Why is a 40th place in the 800 or 1500 less meaningful than a 40th place in the 100 free? If the argument is to get more kids more experience, so they can be better prepared at their next Trials, then we should value all non-finaling swims equally, not allow more sprinters to get experience than distance swimmers. Just because you deem something boring, doesn’t mean everyone does.

It is so frustrating to see the “grade inflation” over the years made clear by the participant count at trials. Go back to 4 heats in each event and 200-300 athletes who actually have a chance like 1996 and before. We’re trying to select the Olympic Team, not give away participation trophies to 1800 swimmers. Qualifying for trials has become a joke, and the result is a less than ideal environment for our top athletes.

I’m not sure how a large crowd is bad for top swimmers? On the contrary if there are only a few hundred swimmers there will be no one in the stands. That’s boring and not exactly a good way to prepare swimmers.

Warm up/warm down facilities are extremely crowded at a meet with that many swimmers, impacting the quality of in-meet preparations for everyone.

As someone that atteded 2012 trials as a spectator, using vacation time, no family or specific person to see, I THOUGHT A BIG TRIALS WAS AWESOME!!!! We sat thru the heats and finals every session. Got freebies at aquazone or whatever that place was called. Omaha was an amazing host city. Btw, what has been the progression of those 2 breastrokers that has a swim off? One was a 14ish girl that did not wear a tech suit. The other was older but so endearing…she got the crowd up – yes, us diehards that stay even for swimoffs! – putting her hands up and getting everyone to cheer. Anyone know Where Are They Now?

11
0
Reply
Know It All
Reply to  Trainwithnogoggles

The 14 year old you are referring to is Allie Szekely. She is swimming for Stanford in the fall. She seems to have competed more in backstroke than in breastroke recently with a 2:11 in LCM 2Back. She’s quite versatile.

7
-2
Reply
Braden Keith
Admin
Reply to  Know It All

And the ‘older’ swimmer was Gisselle Kohoyda, who actually used to work for SwimSwam!

Thanks for the news about Allie Szekely going to Stanford. I had totally missed it.
Since the time I say she’s gonna be a star! 🙂
I’ve always loved her technique and her way of swimming which looks smooth and effortless.
And yes, looks like she has more focused on backstroke in the last 2 or 3 years. But she’s so versatile. Her 200 back looks right now as her best event. Maybe they want to use her as a breaststroker, I don’t know, but I think she also has a monster 400 IM in her in my opinion.
Can’t wait to see how much she will improve with such great training partners.

T with no G, I wholeheartedly second your post. Attended in ’12 without a horse in the race. Just always wanted to check out OTs. Sat through nearly every swim, prelims and finals–there is a story in every heat, even the early ones, even the long races.

Brought non-swimming friends (hooked them with the CWS–also one of the best sport events I’ve been to) and they ended up totally bought in.

Loved the big crowd. There were families with no direct ties to the sport cheering and having fun, asking good questions, and really getting into it. That swimoff was epic. The venue serves big ol’ cold beers.

I’m in favor of a much smaller meet- maybe 3-4 heats per event.