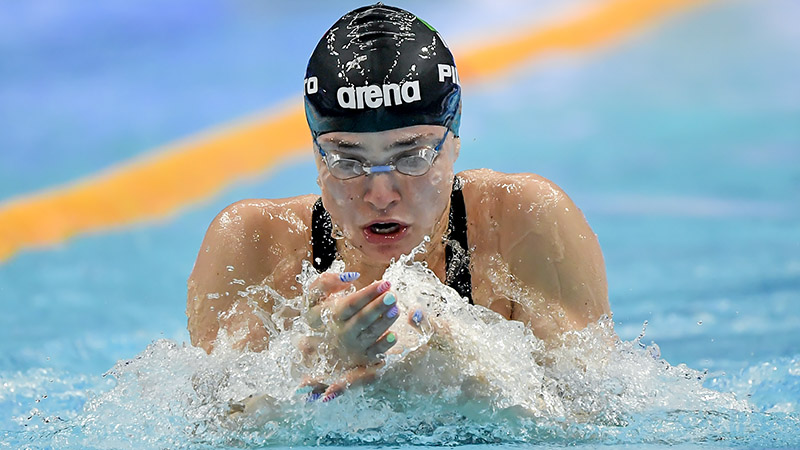 16-year old Italian breaststroker Benedetta Pilato, in a bid to avoid being shut out of another semi-final as the 3rd-fastest Italian, went full-in on Saturday morning in the women’s 50 breaststroke prelims. The result was a top seed of 29.50, making her the only woman under 30 seconds in the event, and setting a new Italian and World Junior Record.

The old records of 29.61 were both her own, set at the Italian Winter Championships in December. In turn, that swim broke her 29.85 from the Settecolli Trophy in August 2020.

Pilato’s swim also broke the European Championship Record of 29.66 set by Russia’s Yulia Efimova at the last edition of the meet in 2018 in the semi-finals.

Pilato has now been under 30 seconds in 5 different swims before turning 17, and that with two more rounds at this meet, plus about 8 more months before she ages up. That ties her with Ruta Meilutyte, who won Olympic gold in the 100 breast in 2012 at just 15 years old and retired at 22, for the most ever sub-30 swims by a 16-year old.

Pilato took a silver medal in the 50 breaststroke at the 2019 World Championships. The race is not an Olympic event.

Earlier in the meet in the 100 breaststroke, Pilato tied for the 3rd-best time in 1:06.34. The top two, however, were also Italian, Arianna Castiglioni (1:05.98) and Martina Carraro (1:06.26). By European Championships rules, countries can enter up to 4 swimmers in the preliminary rounds, but only 2-per-nation can advance to the second round (semi-finals or finals, depending on the event).

Pilato was one of a handful of National Records to fall in prelims of the 50 breaststroke. Among the others was a 30.83 from Estonian teenager Eneli Jefimova, which broke her own record of 30.93 from prelims.

Ema Rajic also crushed almost a second off her own Croatian Record in the 50 breaststroke with a 31.19 in prelims. That was the 16th-best time in prelims and advanced her to the semi-finals.

The old record of 32.10 was done in November at the U.S. Open Championships site in San Antonio, Texas. Rajic was born and raised in the U.S. and trains collegiately at Cal, but is a dual U.S.-Croatian citizen.

She did in prelims. She ended up being the third behind two other Italians and only two swimmers from a single country can move onto the semis

There was a new Swedish Junior Record as well by Emilie Fast with a 30.64 and she held the old record with a 30.93 from April.

I read somewhere else that the Swedish Junior Record used to belong to Sophie Hansson prior to Emilie lowering it so I was incorrect in the prior post.

Pilato took a silver medal and not a bronze medal in the 50m breaststroke, at the 2019 World Championships