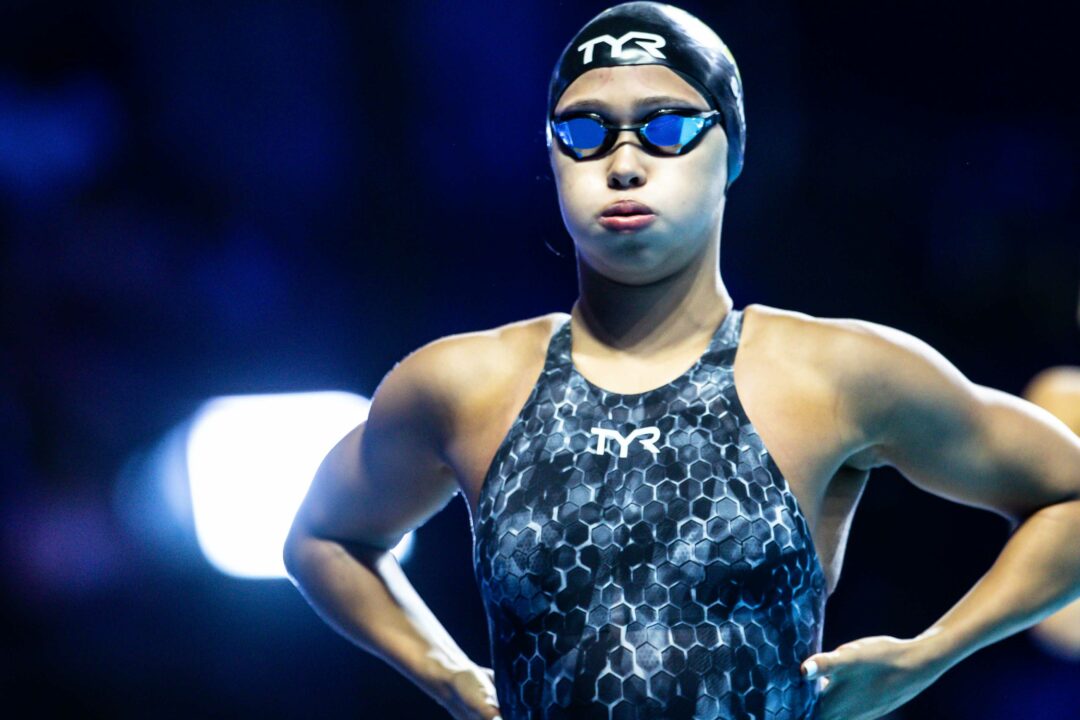 Making the team after entering the meet seeded 39th, Sims is one of this years youngest Olympians that will represent the United States in Tokyo. Current photo via Jack Spitser/Spitser Photography

All of the data discussed comes courtesy of SwimSwam’s data expert, Barry Revzin.

While 2021’s US Olympic Swimming Trials didn’t see anyone ranked above 40th advance to finals, it did see Bella Sims qualify for the Olympic Team as just the 39th seed entering the meet in the 200 free. That makes her the lowest seed in at least the last 6 US Olympic Trials to qualify for the Games.

Between 2000 and 2016, only one swimmer seeded worse than 30th in an event coming into the U.S. Olympic Swimming Trials qualified for an Olympic Team. That honor belongs to Erin Phenix, who, in 2000, went from the 38th seed in the 100 free to 6th at Trials, earning her a spot on the 400 free relay as a prelims-only swimmer. Eight years later, Morgan Scroggy became the lowest seed to advance to the finals at Trials, improving from a seed of 41st in the 200 back to an 8th place finish.

Going into the meet, Bella Sims, the 16-year old standout from the Sandpipers of Nevada, was only seeded 39th in the 200 free. After making her way into finals in the event, she finished 5th in the event, securing herself a spot on the team as a relay-only swimmer for the 800 free relay. In making the team, she became possibly the lowest seed in United States history to qualify for the Olympic Team.

Prior to this year’s trials, over 90% of the Olympic Team since 2000 entered Trials seeded better than 1oth in their event.

Sims was also the worst seed to even qualify to swim during finals, becoming the 4th-lowest of this century. Just behind her was Trenton Julian in the 100 fly, who was the 38th seed in the event before qualifying to race in finals. He now sits tied for the 5th-lowest seed to qualify for a finals race.

The lowest swimmer to make a final in the last 21 years, at least, is Morgan Scroggy, who qualified for the finals of the 200 back at the 2008 Olympic Trials after entering the meet as the 41st seed. This took on special significance earlier this year, because her 41st place is where USA Swimming drew the new cutlines between the Wave I and Wave II meets when the event was split in two because of the COVID-19 pandemic.

While Brooks Curry would go on to pick up a spot on the Olympic team in the 100 free, he also was the lowest seed to qualify for a semifinals swim in Omaha. Seeded 51st going into the meet, Curry was able to crack the top-16 during prelims of the event before failing to make it into the top-8. He wasn’t alone in making the move from the 51st to the top-16, as Talia Bates was able to accomplish the same feat in the women’s 100 back.

That is actually not good. The W200FR was so loaded with the huge number of 1:57 (in-season) swimmers that it seemed it would explode into fierce competition resulting in 1:55 – 1:56 relay. Instead we got #39 seeded.

You make a good point, but there were a few scratches from top contenders- Manuel, Smoliga, Cox, Margalis, etc.

If you read the article it says “was only seeded 39th in the 200 free. After making her way into finals in the event, she finished 5th in the event.” She earned her spot on the relay team.

Jacob Steele, from Indiana, was a Wave 1 swimmer that made Semis in 200 Back.

Also Camille Spink and I think the breast stroker from NC State.

Weird how the first list is 80% comprised of relay swimmers, while the second/third lists are 80% stroke swimmers. I’m sure there’s some logical reasoning for why this is, but I’m blanking.

Yeah – because relays take 6 people but other events only take 2, so while it’s equivalently hard to be top 8 or top 16 in any event it’s much easier to be top 6 than top 2. So you’d expect more non-relay events represented in the semifinals/finals lists because there are simply more non-relay events… and you’d expect more relay events represented in the team list because you have more slack to make the team in those events.

Another way to look at the seeding is, what was her highest seed going in to the meet, did she have a seeding in an event that was high than her 39th seed in the 200 Free which would give her a spot in Wave 2 vs Wave 1.

Did any wave 1 qualifier make a final? Wouldn’t they be lower?