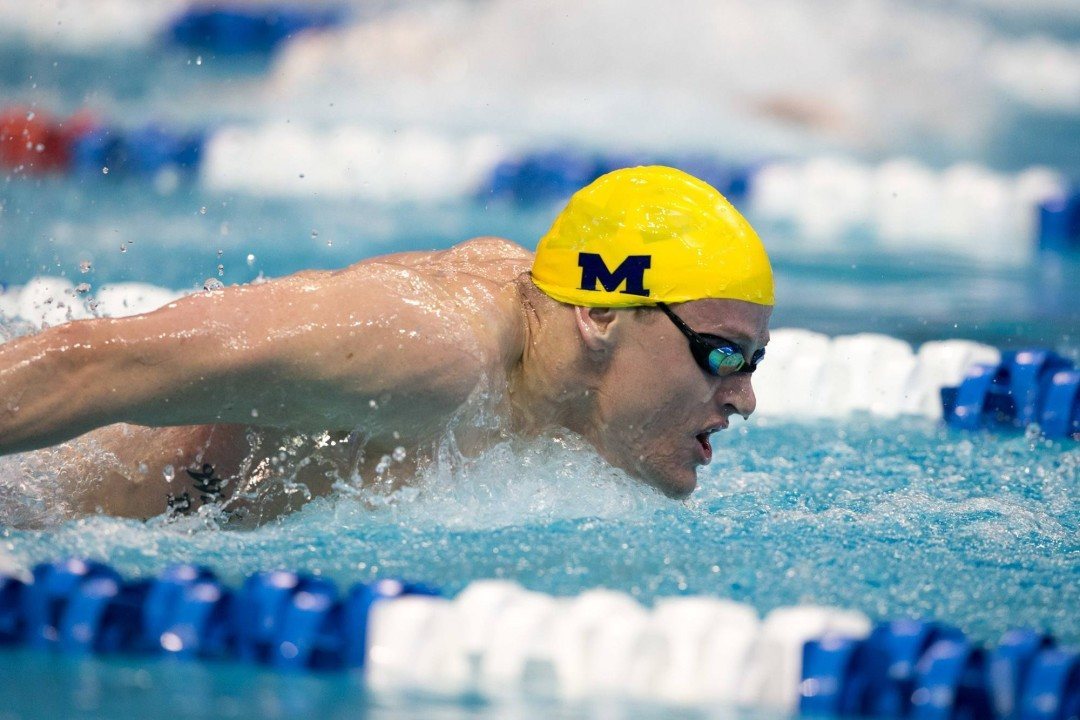 Three B1G crowns for senior Dylan Bosch? Perhaps. Regardless, Michigan will be dominant once more in the Big Ten conference. Archive photo via Tim Binning/TheSwimPictures.com 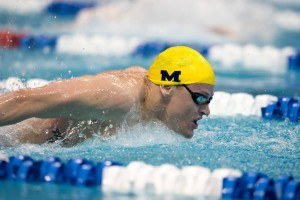 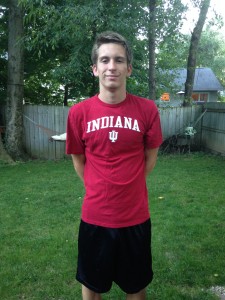 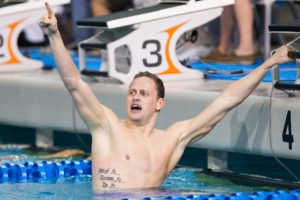 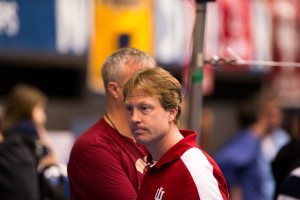 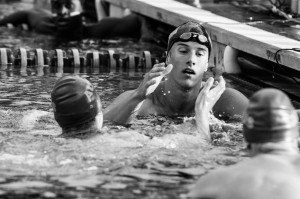 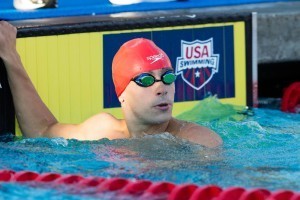 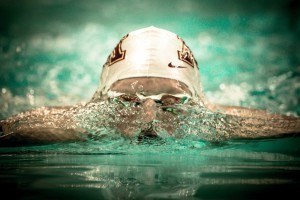 The Michigan Wolverines are locked and loaded, targeting their sixth straight Big Ten crown. As is true nearly every season with a top team like this, Michigan lost some big guns to graduation, most notably breaststroker Richard Funk, freestyler Justin Glanda, and versatile sprinter Bruno Ortiz. Regardless, they still return a whopping eight members of last year’s First Team All-Big Ten (they had 11 total with the graduated seniors). To put that into perspective, no other Big Ten team had more than two athletes on the First Team last season. The Wolverines don’t have an all-star freshman cast, but there are plenty of players elsewhere in the ranks to set them up for another smooth title run.

Ohio State and Indiana, the two teams consistently in tow behind the maize and blue, have also experienced some key graduations. OSU was hit with the departure of elite freestyler Michael DiSalle, while defending 200 free B1G champ Josh Fleagle is redshirting this season to focus on Olympic Trials. Indiana graduated versatile and consistent B1G scorer Steven Schmuhl along with sprinter Yianni Thermos. The deep OSU roster still boasts defending 100 fly champ in junior Matt McHugh, and freshman Mossimo Chavez has already anchored well under 20 seconds on relays this year, so their sprint hopes are still alive. IU’s diving is a massive points boost, and Blake Pieroni will be in the mix for at least a couple of individual B1G titles.

The top three seem as though they’ll stay the same in terms of chronology, and while Indiana might shimmy right up with OSU as the Hoosiers’ team is more intact than the Buckeyes’ after graduations and redshirts, the top of the conference is pretty stable. The only team that will spike in either direction is Penn State, which graduated sprinter Nate Savoy, while would-be senior and defending B1G 100 back champion Shane Ryan is redshirting in pursuit of an Olympic berth for Ireland. Penn State finished in 7th last year, just 1.5 points ahead of Iowa and 51 points ahead of Northwestern. Ryan contributed 47 points in individual events, while Savoy added 45 himself. Both were key legs on their sprint relays, so it’s reasonable to see how Penn State could fall as low as 9th in the conference this season.

Note that this will be the first year that the Big Ten has expanded to score through 24th place, not just 16th. That’ll help out some of the lower tier teams without as many stars who can score in A and B finals.

Indiana – Blake Pieroni (sophomore freestyler), Tanner Kurz (senior breaststroker), Bob Glover (junior backstroker), Vinicius Lanza (freshman butterflier) — IU, like many of the country’s best diving programs, has been hit hard by diving redshirts, but this is the deepest Indiana swimming team in years. Pieroni is a multi-event title threat as a freestyler, and Glover is the fastest 100 backstroker and 200 backstroker in the conference thus far. Freshman 2nd semester addition Lanza from Brazil might be the butterfly piece their medleys need to be seriously competitive with a team like Michigan.

Iowa – Roman Trussov (senior breaststroker), Jackson Halsmer (junior sprinter), Jerzy Twarowski (sophomore butterflier) — Not a ton of outright stars for the Hawkeyes, but Trussov is a top breaststroke talent and they have a whole army of sprint freestylers.

Michigan – Dylan Bosch (senior anything), Evan White (sophomore IM/fly), PJ Ransford (sophomore distance freestyler), Paul Powers (sophomore sprinter), Anders Nielsen (senior freestyler) — It would not be at all surprising if all five of these guys earn separate individual titles this weekend. The Wolverines are deep again, and they still have top end talent to make them just as dominant as last year.

Michigan State – Jon Burke (sophomore distance freestyler), Alec Kandt (junior breaststroker) — Burke looks to be the most likely candidate to score in the top 10 in an event, with his eyes on the mile. The Spartans don’t have much else to get a leg up on their competition at the bottom of the conference, though.

Minnesota – Daryl Turner (junior sprinter), Matt Barnard (senior diver), Jakub Maly (senior IMer), Conner McHugh (sophomore breaststroker) — Turner will lead a young sprint group for the Gophers, while Maly will attempt to A final in both IMs and the 200 breast after nearly completing the feat last season but falling short of the championship final in the 200 IM. Barnard leads a substantial diving corps that will give them an edge.

Northwestern – Almog Olshtein (sophomore sprinter), Anthony Marcantonio (freshman distance anything), Justin Hanson (freshman butterflier) — Olshtein proved last year that he can throw down a 19-low split when he needs to. The Northwestern freshmen are incredibly talented, but they haven’t had any big breakthrough swims yet. They have the potential to kickstart this program and push it in the right direction, though.

Ohio State – Matt McHugh (junior sprinter), Brayden Seal (sophomore distance freestyler) — McHugh will try to defend his 100 fly B1G title, and is an essential part of OSU’s sprint relays. They’ll rely on him even more so now without freestyle stalwarts Michael Disalle and Josh Fleagle. Seal will make a run for top 3 in the mile, and freshmen will be depended on to help fill out relays and pummel some B and C finals.

Penn State – Matthew Grillo (senior sprinter), Matthew Stasiunas (junior distance freestyler), Rory Lewis (freshman butterflier) — Not quite so bleak despite the departures of Savoy and Ryan, as Grillo and Stasiunas will make a mark across all of the freestyle races. Lewis is ranked within the conference top 10 in the 200 fly, and could be a young spark for the Nittany Lions.

Purdue – Joe Cifelli (freshman diver), Marat Amaltdinov (sophomore breaststroker) — Purdue’s diving squad loses big with Steele Johnson redshirting, but  they’ll still pull in a decent number of points for the Boilermakers. Amaltdinov is in contention for the 200 breast title after the graduation of his teammate and last year’s title-earner Lyam Dias.

Wisconsin juniors Clifton and Pinfold have potential to break 43 seconds, while Michigan’s Powers will try to push the back half and stay in the mix here. Another sophomore, IU’s Pieroni, is a great racer, and while the 200 is his distance of choice, he is very dangerous in the 100. His teammate Anze Tavcar finished up at 43.0 in the 100 last year, so add another name to the party. There are no names that scream “favorite”– this is anyone’s race.

Matthew Hutchins barely knocked off Anders Nielsen in the 500 free last season, and both of them are back for more this year. In the mile, however, Hutchins will likely do battle with a different Wolverine, PJ Ransford. Does the sophomore have it in him to get ahead of Hutchins, though? The Badger threw down a monster 14:38 at the Texas Invite, and while Ransford has been about four seconds better than that in his career, he was barely under 14:50 at Big Tens last year. This one might go to whomever hits their taper better, but that might flip-flop come NCAAs.

Michigan might still be the favorite, but not by much. They had a huge win last season, but will lose around a second from their breaststroke leg after Ortiz’s graduation. Indiana might have that fly leg they’re looking for in Lanza, and their best relay this year is already almost a full second ahead of their time at B1Gs last season. You can’t count out OSU, either, but they’ll be hard-pressed to replace their bookend relay legs.

Michigan might have a breaststroke hole, but there is really no other weakness for this team. Plus, you can hardly call their breaststroke a weakness, as Chris Klein finished in the top nine in both the 100 and 200 breaststrokes last season at this meet. Depth in breast will be a problem for them, but their numbers in nearly every other event make this issue a non-factor.

Indiana is rising, and they look strong enough to catch an Ohio State team that took some hard hits after the departure of DiSalle and Fleagle. It’ll be close between them, as it will be between Purdue and Wisconsin. A lot of this year’s outcome, after Michigan, will come down to whichever teams hold their diving together best. Even without their stars, Indiana and Purdue should be good enough to top OSU and Wisco, respectively.

Penn State’s stocks have dipped considerably with their losses, but the rest of the Big Ten looks stable for now.

Hey guys. We’ve got previews for both the men’s and women’s Big 12 in the works for tomorrow. Stay tuned!

Then there’s no need for an ncaa championship preview, either, correct?
Texas will win, preview done?

You didn’t ask about NCAAs…you asked about a 3 team men’s conference with the best team in the nation in it and the other two nowhere near the top 25. Texas will win.

Big 12s is totally different because there’s basically 5 teams and only one of them is ever in the national spotlight.

There are only three men’s teams in the Big 12. Texas, TCU, and West Virgina – not much of a conference. No taper going on there. Regardless, Texas will easily win the NCAAs. The are really good and really loaded.