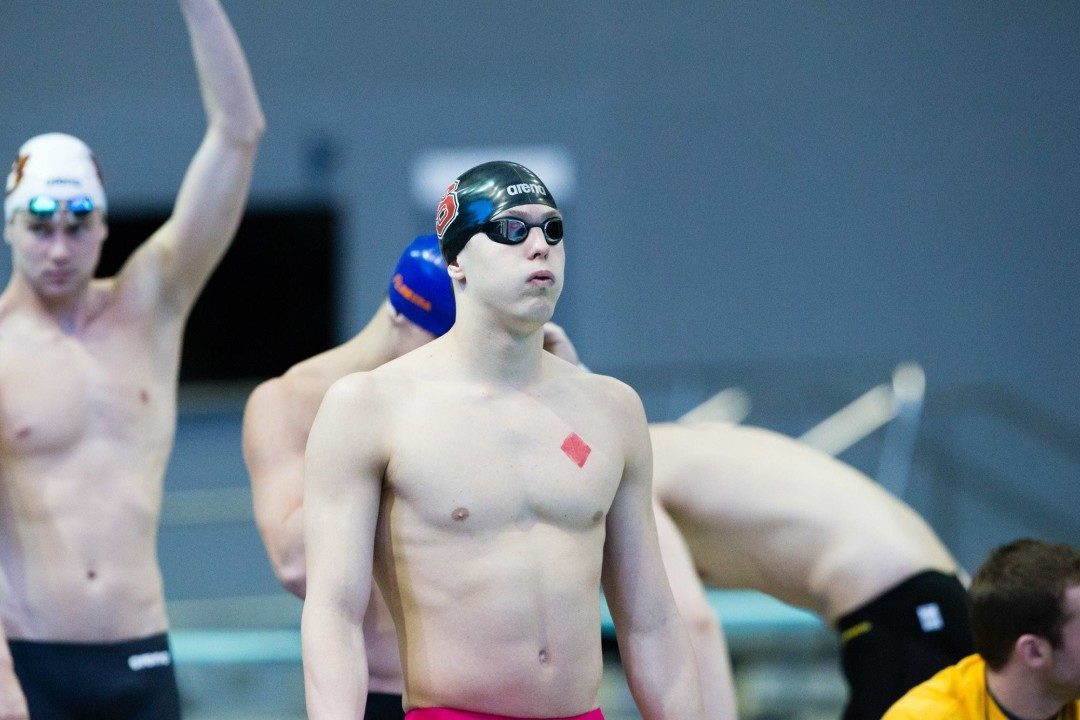 Ryan Held will be NC State's #1 sprint weapon next season, while he heads into this weekend as the fastest sprint freestyler in the conference not named Simonas Bilis. Archive photo via Tim Binning/TheSwimPictures.com

Last year was NC State’s first ACC title in over twenty years, and they don’t look like they’re slowing down any time soon. Regarded by many as the new sprint capital of the NCAA, the Wolfpack has hung tough with teams like Stanford, Cal, and Texas in dual meets this season. They graduated sprinter David Williams, but NC State is NC State, and they’ve found their replacements. Despite a lack of depth in events like the breaststrokes and the 100 fly, the Wolfpack will more than make up for that with their free prowess and powerful relays.

Louisville is incredibly strong again this year, and will be the biggest threat to Wolfpack success. They have at least one stud for each stroke as well as IM, and they have the depth to load up more than just A finals. Don’t forget that they beat NC State in the 400 medley relay at ACCs last season. Virginia Tech and UNC are the next tier down, with both teams having strong diving corps and a solid group of top-tier scorers in the pool.

The tough part of the conference to call is the middle tier– last year, 5th through 8th finished as such: Notre Dame (675), Georgia Tech (663.5), Florida State (619), Virginia (618). Virginia didn’t graduate much and added some freshmen who will make a big impact, while the other three teams were hit with some big graduations. Of those three teams who lost big senior classes, Florida State has bounced back the most with their roster this year. Look for them and Virginia to have an edge over teams like Notre Dame and Georgia Tech.

Duke – Peter Kropp (junior breaststroker), James Peek (junior sprinter), Dylan Payne (junior breaststroker) — The Blue Devils have the makings for some quick medleys, and they have some impressive breaststroke depth led by Kropp. Their freshmen are talented and could be very impactful on Duke’s depth, which is starting to look stronger over the last couple years.

Louisville – Nolan Tesone (senior IMer), Carlos Claverie (sophomore breaststroker), Trevor Carroll (junior freestyler), Grigory Tarasevich (junior backstroker), Pedro Coutinho (senior butterflier) — This team is incredibly stacked, and will make up most of the A final spots that aren’t occupied by NC State swimmers. Tarasevich has been on fire all year in backstroke, and any one of these guys has ACC title-winning potential.

NC State – Anton Ipsen (sophomore distance freestyler), Simonas Bilis (senior sprinter), Christian McCurdy (senior butterflier/IMer), Ryan Held (sophomore sprinter), Hennessey Stuart (sophomore backstroker) — The conference powerhouse. There are five stars listed and we haven’t even gotten to Soeren Dahl or Joe Bonk, two sprinters who’d be stars if they were on any other ACC team. The Wolfpack is just that deep. This is a mix of upper- and underclassmen, but the mentality and culture of this team is palpably powerful and gutsy, and they have strong freshmen that will only make them deeper.

Pitt – Zachary Lierley (junior IMer), David Sweeney (senior sprinter), Mackenzie Rice (senior butterflier) — Pitt’s big guns have plenty of experience, and Lierley is currently the 2nd fastest 400 IMer in the conference. In addition, Rice is within the conference top 8 in the 200 fly to give them two ready-made scorers this weekend.

Virginia – Yannick Kaeser (senior breaststroker), Nicholas Magana (sophomore sprinter), Sam Magnan (freshman distance freestyler), Zach Fong (freshman butterflier) — Kaeser is the top ranked SCY breaststroker in the conference this season. Freshmen are going to be important here as Virginia fights to get back on track towards the top of the conference.

Virginia Tech – Brandon Fiala (junior breaststroker/IMer), Michal Szuba (senior freestyler), Robert Owen (senior IMer) — Diving will give them a big boost, and Owen returns to defend his conference crown in the 400 IM. VT has a lot of individual scorers ready to do damage this weekend.

NC State sophomore Hennessey Stuart had a breakout race in prelims of this event at ACCs last year, posting a huge new best of 1:39.73, and then dropped a few more tenths to take the conference title. He’ll face stark competition from last year’s runner-up, Louisville’s Grigory Tarasevich, while other Cardinals Aaron Greene and Nolan Tesone have been 1:41-mids already this season. Virginia Tech’s Robert Owen was right behind Greene last year for fourth, which keeps him in contention here.

We mentioned that Virginia’s Yannick Kaeser is the top ranked breaststroker in the ACC this year, but he doesn’t have an easy route to double golds. Duke’s Kropp and FSU’s Coombs both have the speed to stick with him in the 100, while Claverie of Louisville is the man to watch out for in the 200.

Brandon Fiala took the 200 IM title last year by a hair over NC State trio Stephen Coetzer, Christian McCurdy, and Soeren Dahl. Coetzer graduated, but the other two are back, along with Louisville’s Nolan Tesone. Better at the 400 IM are McCurdy and Tesone, and those two will duel it out again after Robert Owen led McCurdy and Tesone, respectively, last season.

This was the only relay that NC State lost last year. Louisville took it away, much in part to Thomas Dahlia’s 51.77 breaststroke split, which was significantly faster than that of NC State’s Derek Hren. Claverie should replace Dahlia, though the difference between the two might not be as large. The Wolfpack returns the entirety of its relay, and can also opt to use either Andreas Schiellerup or Hennessey Stuart at the front– Coutinho and Tarasevich are going to be hard to beat on fly and back, respectively, which should make this race very close again.

Diving took place during last weekend’s women’s ACC Championships, and once again, VT leads the field with 247 points– the exact number they scored last year prior to the swimming portion of the meet. Also, once again, NC State scored zero points. Here’s a look at team standings right now after diving:

Despite being down by such a margin last year, NC State came back and won the conference title by almost 150 points over Louisville. The only big scorer they lost was Williams, but their freshmen and transfer Bonk will nicely slide in to take over his relay duties, and the Wolfpack will easily bounce back from that loss. Louisville is far too deep to settle for anything lower than 2nd, while UNC gets the nod over VT after the H20kies graduated some swimming points and the Tar Heels are riding on the momentum of a stellar senior sprint class.

I scored the Swimming ONLY based on Psych Sheet and Louisville wins by 105 points. Should be a GREAT MEET!

0
0
Reply
Swimmer A
Reply to  WoflPack

Hey man, at least he took the time to actually score the meet out. Yes, I still believe NC State will win, but give him some credit. That’s a lot more effort than your sarcastic six word response.

0
0
Reply
WolfPack
Reply to  Swimmer A

I was not being sarcastic. Just stateing fact meet are not scored on paper

NC State didn’t have a good majority of their men’s team swim at the Nike Invite back in November. They loaded up a relay to lock down an A cut, and a couple select guys (Ryan Held and Anton Ipsen included) swam a full meet, but most did not (Simonas Bilis, Justin Ress, etc).

Their 200 free relay along with a good amount of the other relays are from in-season meets, as well as the majority of the times from people who didn’t swim the Nike Invite. Bilis is still the far and away favorite to take the 50 despite having yet to rest for a meet this year. I think Louisville will make it a meet but with only… Read more »

Should be a great meet. NC State is Goliath now.

I think Florida would disagree with your characterization of NCSU as the NCAA’s sprint capital – think about it, but you only have 18.2 seconds to reconsider. Florida also has a 19.36 flat start and 19.05 and 19.57 relay splits.

I do think Florida is very dangerous in the 200 free relay, especially if Dressel can replicate his amazing 50 on the relay (he only split 18.4 at SEC’s last weekend), but I think NC State has the edge overall. Bilis led off in 18.98 at ACC’s last year; Ryan Held was 18.96 going 2nd and Andreas Schiellerup was 19.11 swimming 3rd. The 4th leg will likely be taken by Joe Bonk, who has been under 20 seconds in the 50 at nearly every meet this season, without having to rest to do so. If he can translate that to the 50 itself he will likely be able to be on that 19 second barrier, if not below it. I… Read more »

0
0
Reply
Not a Bandwagoner, I Swear
Reply to  KD

Don’t sleep on that team from Austin either….the leadoff leg will likely be the only split above 19. I know a lot of people are tired of hearing about them, but they are a threat to win every relay.

How tall is Dressel?

I am not saying that Gregg Troy is not a wonderful coach, however I think that Caeleb Dressel was going to go 18.2 no matter who coached him. He’s just that talented. NC state takes kids that are 20 high out of college and turns them into 18 point swimmers. Just look at David Williams. If you look at their progressions of all their sprinters they are nothing short of amazing.