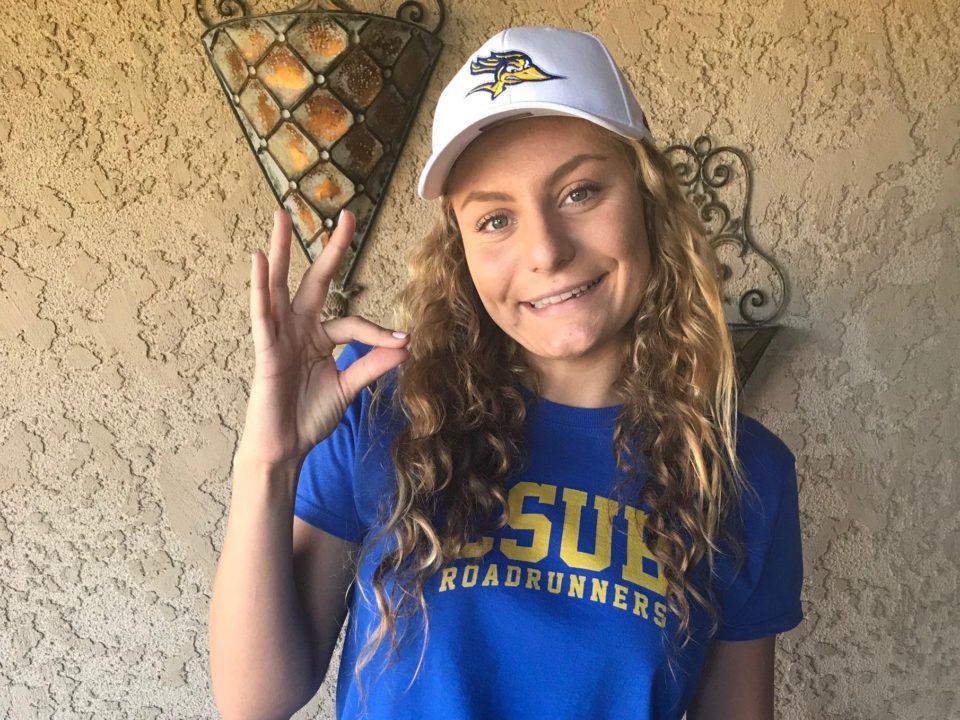 D'Arcy clocked a 52.49, chipping 0.01 seconds off her previous best, which she had swum at the Pepperdine Invite in November of 2019. Stock photo via Autumn D'Arcy

On day 2 of the Trailblazer Invite, Cal State Bakersfield’s Autumn D’Arcy posted a lifetime best 100 fly en route to winning the event. D’Arcy clocked a 52.49, chipping 0.01 seconds off her previous best, which she had swum at the Pepperdine Invite in November of 2019. D’Arcy also broke her own Cal State Bakersfield record with the swim.

BYU freshman Tanner Nelson is continuing to have a great meet, taking the 400 IM in a huge personal best. Nelson swam a 3:44.88, winning the race by 6 seconds. The swim marked a lifetime best for Nelson by 8 seconds, and possibly more importantly, his swim may be fast enough to earn him an invite to NCAAs this year.

Ivan Kurakin picked up another win for UCSD, swimming a 1:36.55 in the men’s 200 free. Kurakin got his hand on the wall first in a tight race with UC Sant Barbara freshman Austin Sparrow, who swam a new personal best of 1:36.77. For Kurakin, the swim was also a personal best, taking 0.37 seconds off his previous best.

Josue Dominguez led a 1-2 charge for BYU in the men’s 100 breast, swimming a 52.42. Brad Prolo came in 2nd, touching in 54.15. Dominguez was also a member of BYU’s 200 medley relay, which won a tight race with UCSD. Diego Camacho, Javier Nicolas, and Connor Stirling were also members of the relay, which swam a 1:26.21.

UCSB picked up another event win with Matt Driscoll taking the men’s 100 back in 47.25. Driscoll also helped UCSB win the men’s 800 free relay, along with Kian Brouwer, Dominic Falcon, and Austin Sparrow. They swam a 6:30.08, setting a new pool record.

UCSD won both the women’s relays on day 2. In the 200 medley relay, Jordan Phillips, Katja Pavicevic, Miranda Renner, and Brittney Miles combined for a 1:3985. Juli Arzave, Ciara Franke, Aneta Wyzga, and Tina Reuter teamed up to win the 800 free relay in 7:25.16.