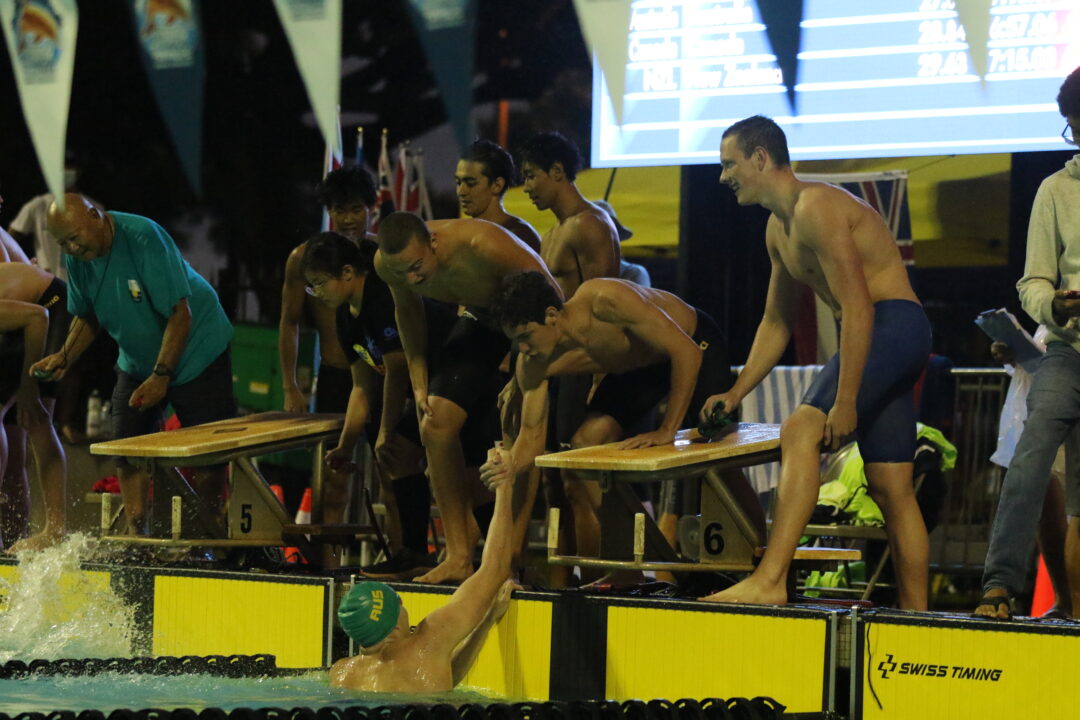 It was Staples' first time under 3:50 in the event, also bringing the Junior Pan Pacs Record under the 3:50 mark for the first time. Current photo via Jon Reiter

Australia’s Joshua Staples put together a great race tonight in the final of the boys 400 free at the 2022 Junior Pan Pacific Championships. After fellow Australian Flynn Southam cracked the boys 100 free and 200 free Junior Pan Pacs Records earlier in the meet, Staples took up the job tonight, obliterating the Championship Record in the 400 free. The previous record stood at 3:50.51 and had stood since 2010.

Staples tore to a 3:48.36, pulling away from Americans Rex Maurer and Alec Enyeart after being locked in a tight battle with them through the front half of the race. The trio was bunched together at the 200m turn, then Staples immediately began pulling away from his American competitors, building a 1.5-second lead by the 350m turn.

It was Staples’ first time under 3:50 in the event, also bringing the Junior Pan Pacs Record under the 3:50 mark for the first time. Here is a split comparison between Staples’ race tonight and the previous Championship Record held by Nicholas Caldwell.

Impressively, Staples was faster than Caldwell on 6 of the 8 50s in the race. Staples’ slowest point of the race came on the 5th 50, where he slowed down to 29.42, but he immediately began bringing the pace back down after that. Caldwell was also able to close just slightly faster than Staples on the final 50.

Notably, Staples enters the boys 800 free tomorrow as the top seed. American Alec Enyeart, who was 3rd in the 400 tonight, is seeded 2nd in the 800, just 0.42 seconds behind Staples.