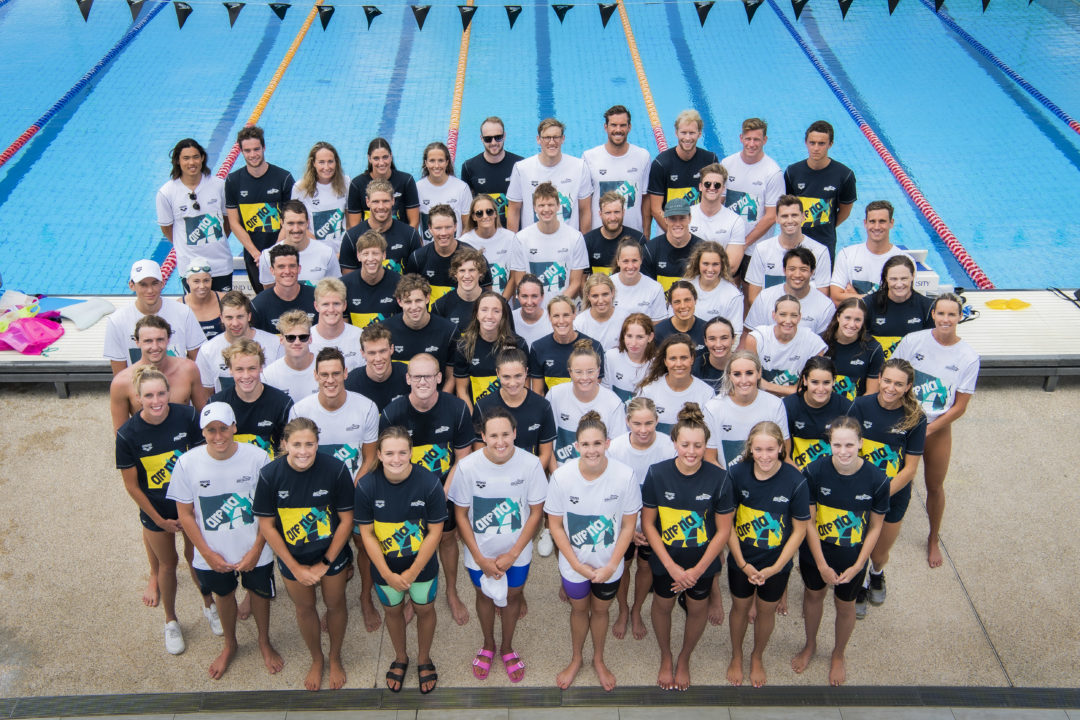 A surprise relay meet for some of Australia's top swimmers at Bond University featured some of the fastest relay splits of the year. Current photo via Cavan Flynn

With no prior notice to prepare for the meet, some of Australia’s top swimmers competed in a relay meet, titled Relay Blitz, on Thursday at the Bond University Pool. The goal of the relay meet was, according to Taylor, to prepare athletes for the Olympic Games environment where they will be tired and uncomfortable. The meet was held in short course meters.

In the first women’s event of the day, the 8x50m free relay, Cate Campbell and Emma McKeon stood out while both serving as the 4th and 8th legs of their respective relay teams. On their first swims of the event, Campbell touched with a split of 23.16, while McKeon was just behind her in a time of 23.45.  Also dipping below 24 on her relay split was Madi Wilson, who touched in 23.88.

Campbell had to say of the opportunity to compete:

“It feels great. Most of us have really, really missed competing. It’s that little bit extra that keeps you motivated throughout the year. To be able to stand up and see where you are this early in the season on short notice is a nice surprise. Expect the unexpected. We have had things thrown at us and it is about adapting and coping. It’s a wonderful initiative and a great opportunity to get some friendly rivalry within the team and it makes everyone excited looking forward to Tokyo. As long as the Olympics are on, that is all we care about. If there is a swimming pool, a starting block and a starter, that’s honestly all we need. I think the world will need an Olympics after the couple of years we’ve had.”

Another unique event that took place during the meet was the 5x300m freestyle relay however, instead of a team swimming the event, all five of the legs were swum by the same athlete. Each 300 was on an interval of 4:30, making the event a broken 1500m race.

The 400 medley relays featured a trio of fast swims from Mitch Larkin, Kaylee McKeown, and Emma McKeon. Larkin led off one of the men’s relays, finishing with the fastest backstroke time of 51.61. His time was only just over a second off of his best, a 50.48 from a virtual meet last fall.

Joining Larkin with an impressive backstroke leg was Kaylee McKeown. McKeown beat out the current world record holder in the event, Mina Atherton, to finish with the fastest time of 56.47. That time is less than a second off of her 55.68 from last fall, which stands as the second-fastest time in the world currently.  McKeown was recognized as SwimSwam’s Female Swimmer of the Year for 2020.

The entire meet video can be found here.

I think Emma is going have a very good Olympics.

Yes, she is looking at 4 relay medals for starters…that would give her 8 Olympic medals already….plus a couple more.

Hoping so, for her & for the sake of swimming too.

They were actually told the morning of the meet, not the day before.

The Australian teams are doing intensive relay training, in a Covid free country in the same time zone as Tokyo…their preparation is going to be the gold standard- watch out!

The Dutchman is a well respected coach who introduced welcomed changes and cohesion after london 2012.. the current coach learned from him

Xenophobic much? I’m sure Aussie coaches make relay blunders as well… don’t pin it on the Dutchman and excuse the aussies …

Xenophobia wow….
You named him the Dutchman
In your previous reply sport.
Any Head coach has to take it
On the chin for poor results.

And are you blaming the Dutchman for the Stillnox six and toxic London squad as well, led by Aussie Leigh Nugent??

Actually I’m not at all.
At the end of the day any bad results
Falls with the head coach. Leigh Nugent
Is back at the helm steering the ship
So wait and see.

Yes the stilnox six, Nugent knew about that champ. I don’t know how he
Got back in favour with Swimming Australia after eight years.
Does this make you feel better now,
That I’ve criticised an Aussie coach.?

BTW, Beryl Gastadello has a picture above, but she is not mentioned in this story. An oversight?