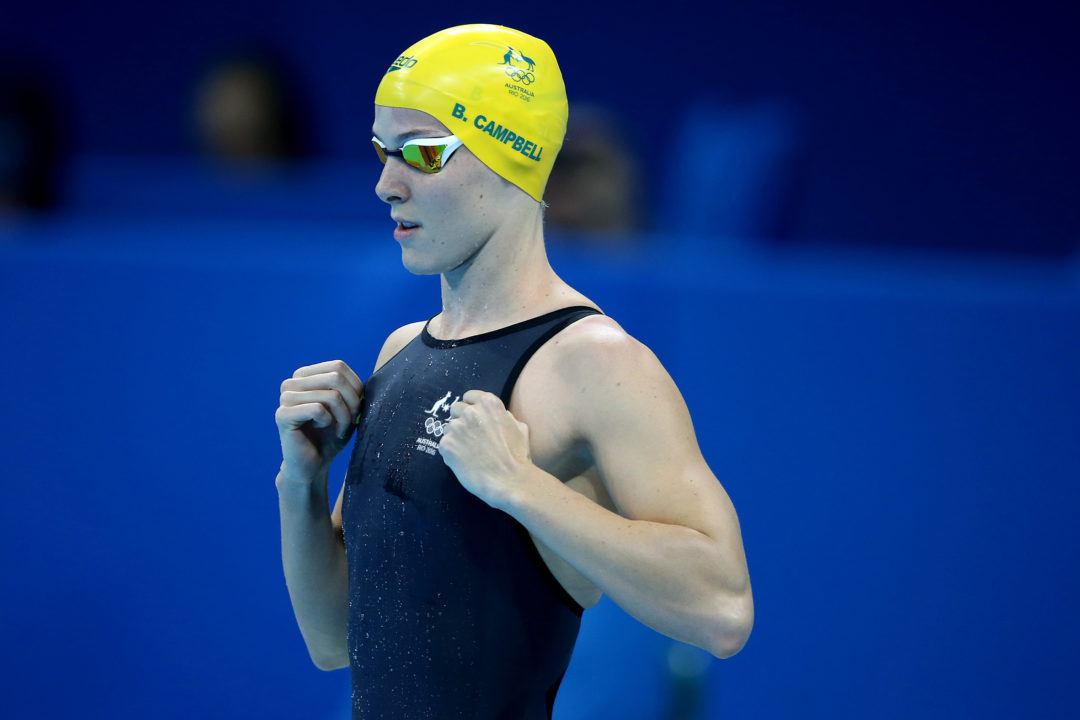 The Australian squad didn't quite have the redemptive Olympics for which it was hoping, leading the coaching staff to already begin discussions on new tactics moving forward. Current photo via Simone Castrovillari

The Australian squad didn’t quite have the redemptive Olympics for which it was hoping, leading the coaching staff to already begin discussions on new tactics moving forward.

After a promising start to the Games in the form of the green and gold women dominating the 4×100 freestyle relay night 1 in a new World Record time, the remainder of the competition saw some of Aussies’ biggest stars underperform.

The fastest 100m freestyler in a textile suit just months ago, Cameron McEvoy, came up short in the event, finishing 6th overall in a time over a second behind his recent personal best. He also missed reaching the 50m freestyle final all together.

Although true to form on their relay legs through the Games, the Campbell sisters, Bronte and Cate, performed well beneath expectations individually, scoring out of the medal mix across both sprint events. Backstroker Emily Seebohm, who carried a streak of international wins in both the 100m and 200m distances headed into Rio, was a non-factor in the 100m final and missed even making the final race in the longer event.

With Mack Horton‘s gold in the 400m freestyle event, Kyle Chalmers‘ outstanding performance in the men’s 100m freestyle race for gold, and Emma McKeon‘s solid bronze in the women’s 200m freestyle behind freestyle aces Katie Ledecky (USA) and Sarah Sjostrom (SWE), not all was doom and gloom.

But, with just 10 medals overall to America’s astounding 33, Swimming Australia is wasting no time pondering changes to be implemented over the next quadrennial. Head Coach Jacco Verhaeren to The Courier Mail, “We will debrief with the team, debrief with the individuals, look at plans and start planning for the next four years.”

“I think most importantly we look at four-year cycle as opposed to trying to be at our very best next year. I think the ship is moving in the right direction but it hasn’t left the harbour yet.”

Among possible ideas on the table is the notion of pre-selecting international teams as opposed to relying on just one selection trials meet.

Says Verhaeren, “There is definitely going to be something in place for that to avoid peak performance too often. If I’ve seen anything, maybe after 2012 the team felt we have a point to prove in 2013, in 2014, in 2015 and here. There has been almost no recovery or time to breathe.”

“We need to start thinking in four-year cycles, especially with the arrived athletes. I can’t reveal the whole thing yet because it’s still on the table. It is all to do with longevity of athletes, not pushing them to the limit every year. You can peak perform every year but the approach can be a little bit different.”

Whatever the changes and new steps to be taken moving forward, Verhaeren is slated to be at the helm. In December, Swimming Australia announced the Dutchman’s contract was extended through the next Olympic cycle ending 2020. That means any changes implemented under Verhaeren’s reign will be tested at the 2017 World Championships in Budapest, the 2019 World Championships in South Korea and the Commonwealth Games and Pan Pacific Championships in 2018, before 2020 Tokyo.

It is crystal clear that the Aussies need to adopt the US method of holding Trials 4-5 weeks ahead of the Games. A double taper spaced a month apart has a lot less volatility than trying to put together back-to-back seasons.

while it is something that should be investigated, i don’t see how it is crystal clear.

Joel, whilst it can and arguably SHOULD be done, its not quite as mechanically simple as it seems. AUS is somewhat of a prisoner of its own geography with its seasons being completely opposite to those of basically all other major swimming nations.

The AUS competition season runs over the AUS summer into early autumn/Easter (Dec – early Apr) which is the northern hemisphere winter. This too would have to be moved accordingly. There would probably be some adjustment pains over the first year or two so the results may not show any instant pick-up

Not only that, but Nicole Livingstone said yesterday or the day before about in their winter many pools close, so there is less pool availability. I kind of caught it in passing, so this comment may have been focused on Australia as a nation – surely the national team would be able to find pool time somehow.

Yes, a lot of public outdoor pools in the southern states (NSW,VIC,SA & WA) do close over winter. Whilst there ARE major indoor facilities available & perhaps a few large private school facilities possible; lane availability & travel may be limiting factors. In northern warmer states like QLD; year round outdoor training is far more practicable. Still, they’re far better off on this front than many other nations where 50m pools may be scarce

I heard that, too, but then I’m thinking you either make the adjustments, big as they may be, or you continue to settle every 4 years. I don’t know about you, but if I’m an athlete spending thousands of hours training for a once in a lifetime goal, I’m thinking “let’s do EVERYTHING we possibly can to get the best results”.

Nicole is overstating the issue but there is a degree of validity. Yes, there are these podium centres plus some other indoor facilities esp in Sydney, Brisbane & Melbourne but you can still have the issue of lane availability.

Not a factor in relation to the Australian team. Pool closures affect younger levels not serious or elite swimmers who train throughout the whole year.

Isn’t that just excuses to not take the best route?

I thought they said the same thing after London. Listening to the live-stream feed with Nicole as the host, she had mentioned that Mitch Larkin admitted that the Aussies are not as mentally strong as the Americans when it comes down to crunch time. I have no idea what the answer would be. I do know that the NCAAs for both men and women teach them about pressure and how to work with it. This, I believe, was one of the reasons the American men were so successful for years before the foreign swimmers became a staple of the college teams. Perhaps more Aussies could enroll into American universities? Anyone else have theories about this? Personally, I feel very badly… Read more »

I think it has to be more of a mental issue than anything else. In the case of the Campbells, they were as fast as ever in the relays. They must have been so nervous in the individual swims that they started getting really tight. It’s a shame because they’ve always seemed so kind to their own team and competitors.

There was a report a few days ago about how C1 did indeed suffer from nerves at Rio.

“Suffer from nerves” that’s pathetic she’s a professional athlete and the best in the world that’s just a bunch of bs. The majority of the Aussies just had a bad meet.

For Cate and Emily, it’s their 3rd
Olympics.

Actually, the Campbell were not as fast as ever. Consider C. Campbell was swimming a 51.59 relay split at the time her PB was 52.33. Well, since then her PB became 52.06. I was looking for a 51.3 relay split from her. Her best in Rio was 51.97. The same goes for B. Campbell 51.78 relay split vs. 52.15. Better, but the two could have potentially been 1 second faster. Individually, they were way off their times. I don’t buy the “mental” aspect. Let’s face it, by that measure you’re saying that 90% of all Australian swimmers are mentally weak. That’s just not believable. It’s a physical thing with the back-to-back seasons like Joel Lin says.

Taking the NCAA route is no magic fix. Just as many foreign swimmers disappear without a trace as there are those who prosper. Personal chemistry with new coaches/cultural adjustment are intangibles with ANY new environment. Even top US swimmers can end up making wrong calls re college choices. Also the issue of academics and what precedence the swimmer may place upon this. How many of the very top swim schools, outside of the Cals & Stanfords (and maybe 1-2 others) are legitimately elite academic schools ? If the swimmer is more swim focused, no real issue but if they are seriously academic/looking at the professions; then its far less simple. IF their is sound infrastructure support at home and the… Read more »

Agree completely. Don’t be fooled that NCAA swimming is superior, as it conflates education and athletics in a way that is often unhealthy. More elite racing is the answer to prepare to perform under pressure.

What I DO think would be healthy is for the next generation of coaches to broaden THEIR horizons and seek NCAA posts and/or posts in other countries rather than living inside the AUS bubble. THAT may be an important cultural shift

Don’t the Aussies do quite a bit of elite level racing?

Not generally at a comparable level. The AUS competitive summer season consists of the various state championships and whilst you may see a number of swimmers from other states compete at the 3 biggest state meets (Qld,NSW & Vic); the only time you will get a full strength domestic field is Nationals. The other major meet during the summer has been the Super Series in Perth which has been a 3 way meet with teams varying from USA, JAP, CHN & RSA. There have been winter GP meets but these have usually been used as pre big meet hitouts. Otherwise, outside championships they send part strength teams to Japan Open & Santa Clara.

Big contrast between US and Oz. US Coaches, officials and athletes all round usually college educated somewhat an exception in Australia.

Definitely an exception amongst coaches. Swimmers = maybe 50/50 split these days with an increasing number juggling swimming and degrees. Most AUS universities are flexible with elite sportspeople in these cases … as long as they pass their courses.

I was very confused why the Aussies were underperforming. I hope they do better next time!