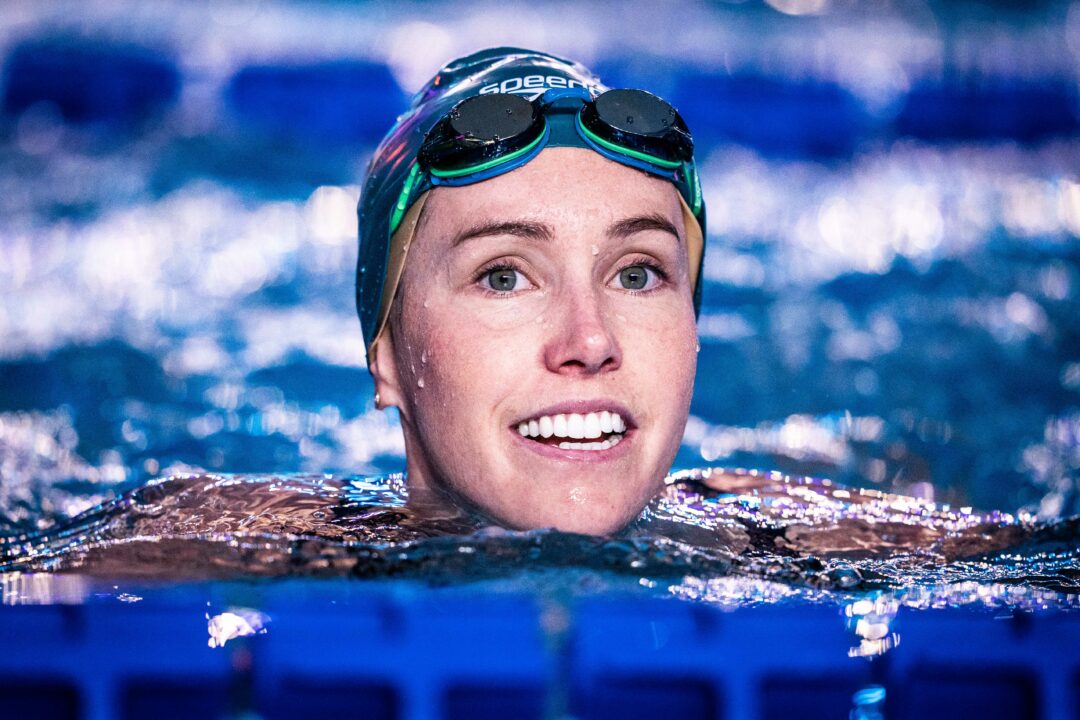 The 27-year-old Griffith University star had been home in Australia since having competed on the FINA World Cup circuit this season, as well as racing as a member of London Roar in season 3 of the International Swimming League (ISL).

The free and fly ace did not race at the just-concluded 2021 FINA Short Course World Championships, as Australia did not send an official team. World Record holder Kyle Chalmers and Holly Barratt were set to be the sole green and gold representatives there in Abu Dhabi but Chalmers wound up withdrawing to undergo shoulder surgery.

McKeon has appeared as part of the national public vaccine campaign.

McKeon is not the first Aussie star to have tested positive for COVID-19. LA Current’s Madi Wilson was hospitalized while competing in Naples, Italy this past September. She fully recovered and competed on the FINA World Cup circuit thereafter.

Although there are still state-by-state travel restrictions within the nation of Australia, Prime Minister Scott Morrison says mask mandates and lockdowns will not be reinstated.

79.8% of Australia’s total population has been vaccinated according to Bloomberg data, while 89.59% of Australia’s eligible population—people over the age of 12—have been fully vaccinated against Covid-19 according to a tracker run by the Sydney Morning Herald. Early evidence has led scientists to conclude that two doses of existing vaccines have limited efficacy on the new Omicron variant, which is dominating new COVID-19 infections globally with higher spread rates but generally more mild symptoms. While booster shots have provided a significant increase in levels of protection against Omicron, only 6.5% of Australians have received booster doses so far, Bloomberg reports.

Emily seebohm also has covid according to her TikTok

She also was in hospital isolation room for Sars2. .

And of course today, most of the State Premiers ignored the PM and reinstated mandatory mask-wearing whilst indoors (eg stores, hotels).

PM is too busy pandering to undesirables because of the upcoming election to do the right thing.

This is about Emma not Scot Morrison but NSW is on par with his Covid viewpoints.

NSW reintroduced a mask mandate so not anymore.

You introduced the big picture of Federal. elections . I think NSW is close to his Covid viewpoints politically & socially .

Is this confirmed? She’s in isolation, but that could also be because she is a close contact.

From the Canberra Times:

“I’m feeling alright, it’s just bad timing,” McKeon told the Mercury. “There’s going to be thousands of people in the same boat over Christmas. Everyone will get COVID at some point, it’s my turn now.

She’s also not returning to training until February 😮

Scary even with the current vaccines available. hope she recovers fine and doesn’t have those long-haul symptoms.

Its plural . Israel is up to Pfizer round 4 .

Out of context, but in one of the cameo videos MA shared on his instagram, he said coming off of SC Worlds, he decided he wanted to break MPs 400 IM World Record and got it posted on the wall now.

so.. instead of dying on free he will die on the back already and be rescued after 200m?

I have better odds on flying to the moon

Is this true? Was he joking?

25 m times? We are talking about kids and pre master novice meets?

Unless he changed everything about the way he swims he would go out in 52:5 and die horribly before the end of the backstroke leg.

Everything is one degree of separation to Michael Andrew on swimswam

Bro should let his swimming do the talking. He’s an insane talent but imo better to keep that to yourself.

0
0
Reply
Daniel Carr (not the backstroker)
Reply to  Swammer

The only person I could see getting close to this record is Dean Farris, if he decided to become an IM swimmer, it’s all up to him