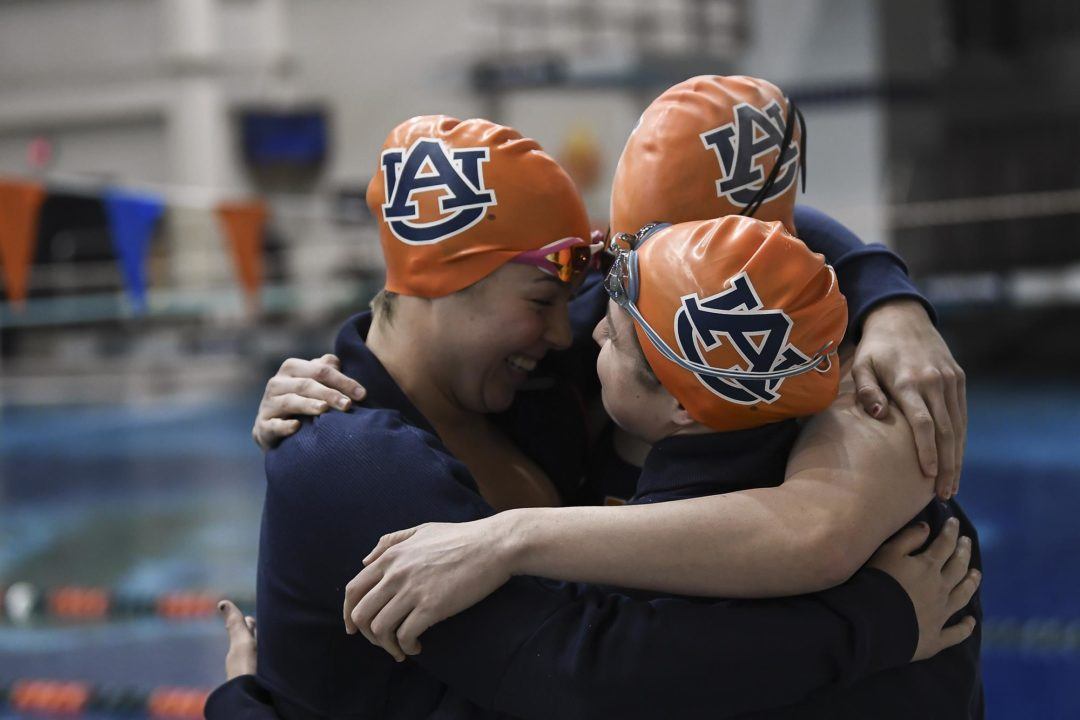 The Auburn Tigers traveled north to Nashville to take on Vanderbilt — a familiar conference foe but one they hadn’t faced in dual meet action since 2014. At their last meet, Auburn crushed Vanderbilt, 201-75. Despite the eight-year break, the tune of the meet was much the same, with Auburn easily claiming the victory.

The Tigers went 1-2-3-4 in ten events, though the last three events were scored as exhibitions. They wasted no time getting going, claiming the top four spots in the first event of the meet, the 200 medley relay. The team of Daisy Platts, Stasya Makarova, Lexie Mulvihill, and Claudia Thamm took the win, cracking the 1:40-mark with a 1:39.44.

Auburn is looking to build off last season’s momentum under second-year head coach Ryan Wochomurka. They sent 14 women to NCAAs last year, including ten individual qualifiers, and return all but one this season. They also had a stellar summer, highlighted by Makarova and Hannah Ownbey scoring at U.S Nationals — Makarova in the 100-meter breast and Ownbey in the 200 and 400-meter IM.

In addition to their summer achievements, Auburn has added valuable firepower to their roster in the form of Daisy Platts, an NCAA qualifier and graduate transfer from Bowling Green State University. In her dual meet debut for Auburn, Platts swept the backstrokes, winning the 100 in 53.65 and the 200 in 1:57.11.

Last season, Auburn’s highest NCAA finisher was backstroker Meghan Lee, who took 19th in the 100 in 52.00, then blasted a 51.66 leading off the 400 medley relay. Though Lee did not swim backstroke here, she and Platts should make a powerful 1-2 punch for the Tigers.

For Vanderbilt, the highlight of the meet was sophomore Mercedes Traba. She finished second in both the 1000 and 500 freestyle. In the former, she set a school record of 10:04.12, bettering the mark set by Erika Deardorf in 2011 by over five seconds.

While lopsided, the matchup was an intriguing one as like Auburn, Vanderbilt are trying to build off their momentum from last season. For Vanderbilt, Traba is leading the charge through the early part of the season. Kailia Utley, their lone individual point scorer at 2022 SECs, returns for her sophomore season. They’ve also picked up Arizona transfer Faith Knelson and freshman Jenna Ravarino. With full seasons at Vanderbilt under their belts, they could help lead Vanderbilt’s climb out of the basement of the SEC.

Both their men and women that attended Nationals this last summer showed improvement. They will not be able to beat the Bama girls this year, but it is coming…